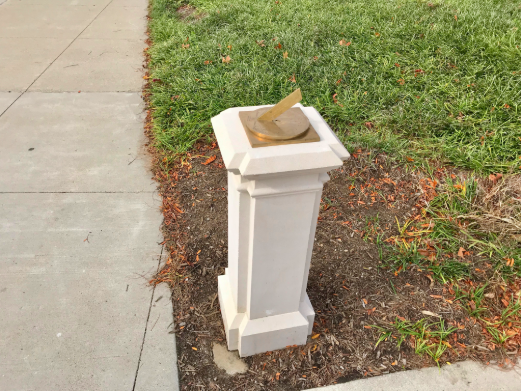 Sundial is installed in the WHS courtyard next to the commons. “For those either in astronomy or just have an interest in its scientific value, it is there for them, but also for everybody as an aesthetic addition to our courtyard,” astronomy teacher William Froberg said.

The WHS astronomy classes have taken their classroom learning to the next level with a real-life, hands-on device: the sundial. Astronomy teacher William Froberg installed a new sundial as an addition to the WHS courtyard in October. The WHSPO funded the sundial, which is an instrument that tells time by using the position of the sun and casting a shadow onto a flat platform engraved with different times.

“The new sundial was a nice addition to demonstrate a practical implication of the sun earth system, but it also happens to be a very attractive ornament,” Froberg said. “For those either in astronomy or just have an interest in its scientific value, it is there for them, but also there for everybody as an aesthetic addition to our courtyard.”

In order for the sundial to work successfully, the ornament needs to be placed in a specific position that captures the most natural sunlight.

“We looked at a number of locations and its current location was found to meet the requirement of not being obstructed by other objects,” Froberg said. “Likewise, having the sundial in the courtyard makes it most accessible and visible to folks moving about the campus.”

The sundial was installed in the WHS courtyard for several reasons, including the benefit of the astronomy class that Froberg teaches.

“One of the challenges in astronomy, like any class, is to bridge the gap between abstract concepts and concrete examples and in my opinion, the sundial is a really good tool for doing that, especially outside of the classroom,” Froberg said.

Over the course of the year, the astronomy class learns about the solar system. Within the unit, students learn about the orbit of the sun and the moon. The sundial connects to the sun’s orbit.

“Early on in the astronomy curriculum we spend time looking at the sun, moon, Earth system in general and the rotation of each of those as well as their orbits, so this has a nice fit in that unit,” Froberg said.

The sundial is a helpful feature used to connect concepts with examples. However, the sundial can be useful to other subjects besides astronomy.

“I think the sundial could also benefit from a historical perspective, another class or curriculum might find it to be a useful addition as part of a historical examination of science and scientific instrument,” Froberg said.

The sundial is considered to be the oldest scientific instrument. There are early examples of it going back to 4 or 5 thousand years ago. Ancient Egyptians invented the sundial, becoming popular in 1500 B.C.

“It’s developed all throughout history and is obviously sort of been superseded by more technologically advanced timekeeping devices, but it still does what it does very well,” Froberg said.

Students taking the class learn about the historical value of the sundial. The class covers how it was used and how it works.

“In ancient times, [it was] the only way to tell time,” senior Carly Camphausen said. “The Babylonians used this machine where you have a stick on a platform and based on the shadow where it was pointing, that’s what time of day it was, or how big the shadow was,”

Some students who take the astronomy class think the sundial is a good way to educate students in an interesting way.

“It offers a whole other aspect of learning and gives students the ability to see what life was like before technology,” Camphausen said. “It also drives people to be more interested in science and in how simple something can be while simultaneously being super effective.”