Meet the Cast of WHSTE’s ‘Chicago’ 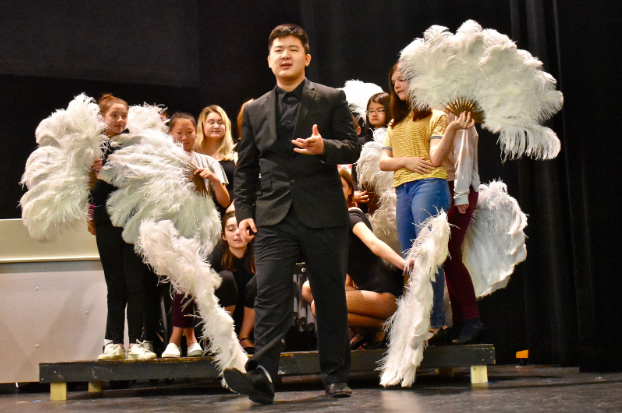 Junior Kaiyang Zhang rehearses for a scene in WHSTE’s fall production of "Chicago" the musical. Zhang plays Billy Flynn, a charismatic defense attorney, who appears in many scenes and songs. WHS performs "Chicago" on Nov. 21, 22, and 23.

“Chicago” the musical will be hitting the WHS stage on Nov. 21, 22 and 23. The student actors have put many hours of preparation and hard work into the Bob Fosse show, for the tricky choreography and lively songs require many rehearsals to master.

“Billy Flynn is a lawyer who helps people as a defense attorney, but he doesn’t really care who he helps as long as he gets money,” 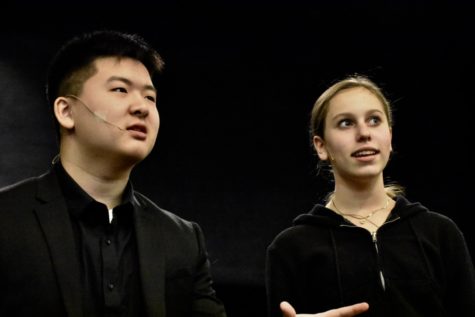 Zhang has been a part of many of the plays and musicals at the high school, and has had a better time with acting and learning because of his experiences.

“I’ve been doing musicals and plays at WHS for a good while, so I just keep doing them because I like it,” Zhang said. “Through more experience, I have been able to have an easier time with acting.”

Zhang rehearses as Billy Flynn by going over the dancing, singing and acting portions of the musical along with the other cast members.

“We basically have everything [we need for the performance],” Zhang said. “We are just improving the pieces and fitting them together.”

In the musical, freshman Maddie Troost plays Liz, one of the six “Merry Murderesses” who appear in the famous scene “Cell Block Tango.”

“Liz is one of Velma’s inmates, who also killed her husband,” Troost said.

“Cell Block Tango,” an important scene that introduces characters like Liz, is a big singing and dancing number, which makes it exciting and enjoyable.

Troost got interested in the musical because she likes musical theatre and being a part of a large community. She also wanted to be a part of an extracurricular full of different grades. 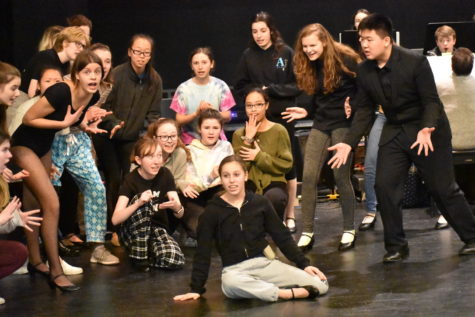 Troost has been doing musical theatre for 11 years at organizations such as Drama Kids, WMS, Martha’s Vineyard Children’s Theatre, the Community Theatre in Weston and more.

With play practice being almost every day of the week, it can be hard for the actors to balance getting ready for their performance with other tasks such as finishing homework, spending time with family or even just relaxing. Time management certainly plays a big role in being successful.

Freshman Jane Gargano plays June, another of the five other Merry Murderesses in Cooks County Jail, where most of the musical takes place.

“In ‘Chicago,’ there is a jail where Roxie and Velma, the two main characters, go when they are convicted of their murders. Then there are five other murderesses in [that scene], and I am one of those characters,” Gargano said.

Gargano participated in all of the musicals at WMS, and she heard middle school drama teacher Katherine Lopez talking about the fall musical last year. She also remembered WHSTE Director Aidan O’Hara selling his pitch about the musical when he visited the middle school. Ever since, she knew she wanted to be a part of the fall production.

With many different character choices in the cast of “Chicago” to audition for, one would think that it would be hard to choose a character to play. But Gargano knew that being a Merry Murderess would be right for her.

“I thought the Merry Murderesses would be a good part to play.They are really fun, and I really like the song,” Gargano said. 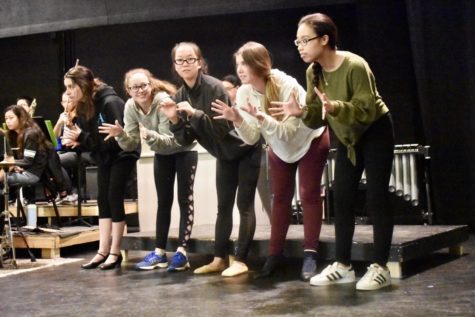 As the performances of “Chicago” get closer and closer, practices have become more intense. Now, practice for Merry Murderesses and other characters in the ensemble happen four times a week from 3:30 to 6 p.m. and from 6:30 to 9 p.m. on Wednesdays.

“As it gets closer to the performance, things sort of start ramping up, and we have more practices,” Gargano said. “Usually, since I’m in ensemble, I would be there for two or three days a week, and now I am there for four-ish [days a week].”