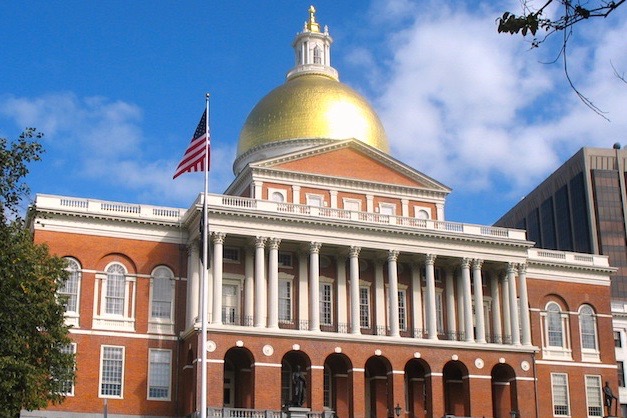 Pictured above is the Massachusetts statehouse in Beacon Hill. WSPN's Taylor McGuire shares her opinion on the proposed bill to ban the b-word in Massachusetts.

Picture this: You’re in the car blasting your music with the windows down when “Truth Hurts” by Lizzo comes on. You sing the lyrics with fluency: “You coulda’ had a bad bitch, noncommittal…” Suddenly, red and blue lights reflect off of the rearview mirrors, and the next thing you know, an officer is writing you up for a $150 fine. Was it for parking the car in a bad spot? Or for playing music too loud? No, it was because you said the “b-word.”

This past May, Massachusetts state representative Daniel Hunt proposed a bill to ban the “b-word” statewide that has garnered much attention in recent weeks. Yes, the same b-word that your friend jokingly called you because you wouldn’t give them your homework during your free, and the b-word that your grandma called your female dog yesterday.

The bill proposes that a first offense will incur a $150 fine, and a second offense warrants a fine of $250 or a sentence up to six months in prison.

The proposed bill would specifically apply when someone uses “b****” in an “annoying, accosting, or demeaning way.” But who decides when the word is being used in a demeaning way? Could I call the police when my friend calls me a “boss b****” when I thought she was harassing me, but she was really just complimenting me? The criteria for what could qualify as being “annoying” or “demeaning” is just too broad to make a law on.

While the word can be used offensively, it can also be empowering. Some of the most influential women in the music industry such as Cardi B, Nicki Minaj and Lizzo often refer to themselves as “b*****’s” in their songs. When used in this empowering way, the b-word really just means a hard-working, successful and diligent person. It can also be used in a non-demeaning way as just another form of saying “girl.”

I’m not saying that the b-word is this fantastic word or that you should go around calling everyone you know a b****, but I am saying that when considering all words that could be banned, why b****? Before banning a word that is a synonym for a female dog, maybe consider banning one of the many other words in the English language such as the n-word or any other derogatory words for other minorities or members of the LGBTQ+ community. Compared to some of those pejoratives, the b-word comes up short as worthy of being banned.

If we ban words such as b**** that aren’t necessarily offensive or demeaning, then the door is open for banning a much wider variety of words that also don’t necessarily deserve it. Banning the b-word would be a big mistake for our state, and it would cause more problems than it would solve.