Directors begin preparations for the class of 2020’s senior show 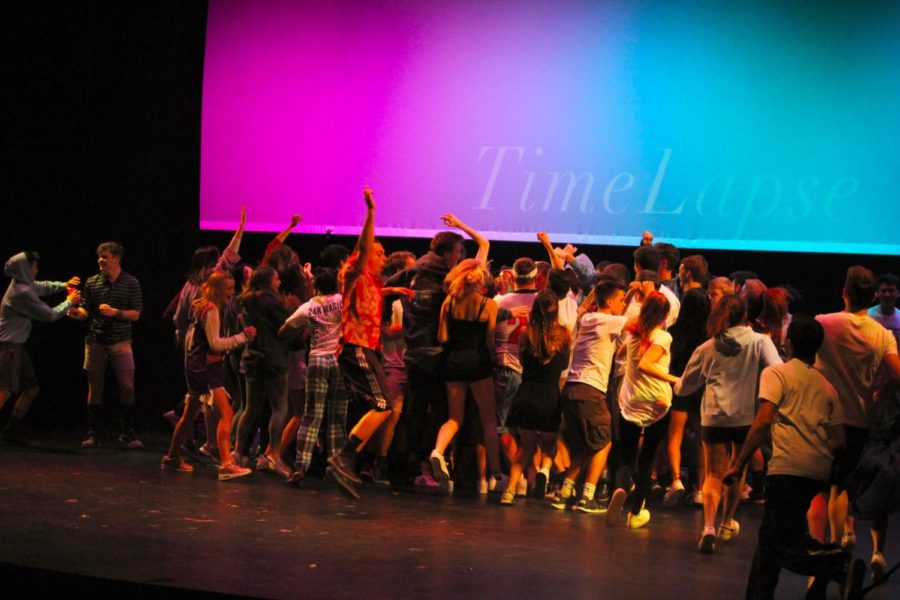 For seniors who are wrapped up in the peak of college applications and school work, senior spring may seem like a far off fantasy. However, senior show directors Fatma Sayeh, Owen Smith, Emma Kiernan and Stone Harris are already working to organize a senior spring highlight: the class of 2020 Senior Show. This year’s directors have put a great emphasis on starting the planning process early, something past seniors have struggled with.

“I hope that we can improve on preparedness from past shows. I know that there’s been a history of skits and videos not being together in time,” Harris said. “We had our first director’s meeting, [November 14th], so writing and planning [started] very soon.”

Senior Fatma Sayeh shares Harris’ intention to get to work early, in an attempt to save the Class of 2020 from scrambling a show together last minute. After their first meeting, Sayeh was very optimistic.

“We have already started planning, so we are actually ahead of all the other grades in past years,” Sayeh said. “I just hope we are organized, that no one feels rushed and that we put on the best show we can.”

From this meeting, the directors have already started assembling a timeline for scheduling and discussed their intentions.

“We will start creating videos and skits in February and then rehearsals [are] all of March, but it will all be planned before February,” Sayeh said.

Along with making sure the show is prepared and on schedule, another concern of the directors is managing the differing involvement, schedules and skills of their classmates. The directors hope to make sure everyone is satisfied with their involvement so the show is a positive bonding process for the class of 2020.

“We will determine who is acting in what skits by taking into account who wants to do what, and doing our best to make everyone happy,” Harris said. “I definitely think the biggest challenge will be time management. It’ll be tough for a lot of kids to fit time to work on the show.”

To promote inclusivity and collaboration, the directors plan to have students involved in forming ideas, writing skits and performing.

“We ask everyone to send us skits and if they want to be in that specific one, then we can ask other people if they would like to be in it,” Sayeh said. “We are going to try to be as inclusive as we can be.”

Through this collaboration, the directors hope to develop a humorous and entertaining show that is appealing to the audience.

“I think taking ideas and translating them into the show will be tough and making sure that both parents and students watching the show enjoy it,” Sayeh said. “We have to appeal to two types of audiences, and I hope we do.”

The directors must also appeal to a third type of audience: the administration. The administration will oversee the senior show process and approve content to make sure that it is appropriate for performance.

“[A challenge is] making sure everyone thinks it’s funny and that it’s not too inappropriate or that it’s not something the school wouldn’t be okay with,” senior Owen Smith said.

Sayeh, however, is confident that this won’t be a problem for the directors.

“I have a pretty good relationship with administration so I’m not nervous about meeting with them,” Sayeh said. “We will go over skits and everything and have it approved by them. I think it will be smooth sailing.”

Working with the administration and their peers, the directors hope to use their individual experiences and skills to create a great show.

“I direct films and produce films, and I also have a lot of experience videoing and editing, [as well as with] motion graphics and animation,” Smith said. “I’m hoping that I’ll be able to bring some new stuff to the show and that everything will look really nice and be of high quality.”

Reflecting on the entertainment of past senior shows, Harris also hopes to use his own humor in the show.

“I have really enjoyed the creativeness and humor from past shows,” Harris said. “I hope to bring my creativity and passion for comedic skits to the show.”

Most importantly for all of this year’s directors, is not the performance itself, but the unifying effect it has on the grade.

“I want to bring our grade together for this amazing event and have everyone have fun, that’s the whole point of this, to have fun and enjoy the end of the year together,” Sayeh said.