Opinion: WHS Field Hockey has been playing for much more than a state championship 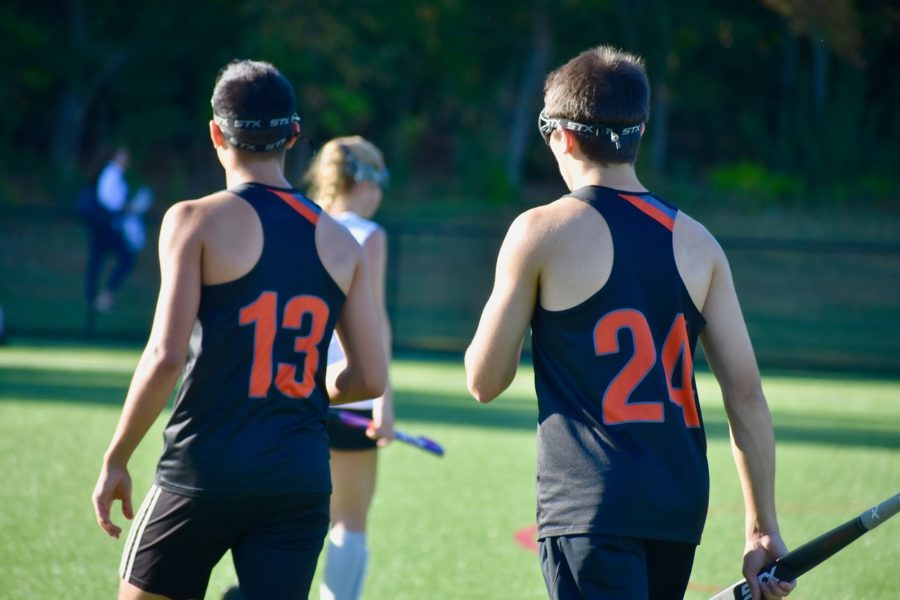 Seniors Zeke Betancourt and Aiden Chitkara walk in unison during a game versus Weston on Sept. 25. Both seniors, as well as Zeke's twin brother Ethan Betancourt, decided to play field hockey this year despite it being a predominantly female-played sport in the past. WSPN's Jimmy Paugh offers his perspective on their decision and the resulting backlash they have received.

Although the fall sports season is over, many WHS teams clinched a playoff berth following a successful season. One of the more controversial playoff berths, however, was that of Wayland High’s varsity field hockey team.

The team looked vastly different this year, most notably due to the fact that seniors Aiden Chitkara, Zeke Betancourt and Ethan Betancourt joined the team. In the past years, Wayland’s varsity roster has primarily consisted of female athletes.

This wasn’t the first time that men have played field hockey. In fact, there are numerous Olympic and national men’s field hockey teams that compete on the world’s biggest stage every year, though there is one noticeable difference between these professional athletes and the three seniors at Wayland High School, when it comes to their involvement with the sport: Aiden, Zeke and Ethan have received an excessive amount of criticism from neighboring towns because of their decision to break a social barrier this past fall. This resentment had filled their season with many distractions, most notably when a Waltham parent took his frustration to Twitter, saying he was disgusted by what he saw.

In fact, the three Wayland seniors haven’t broken any rules to deserve this much judgment from opposing athletes and parents. According to MIAA guidelines, although field hockey has been primarily played by females, it is a coed sport.

Most people make the assumption that field hockey is a girls-only sport, but it isn’t. Any high school athlete could have tried out this past fall, much like golf, cross-country and football.

This leaves many perplexed by the excessive criticism surrounding the three seniors: Why have these boys received so much hate for deciding to play a co-ed sport?

The answer lies within the societal standards between high schools for the past several years. Aiden, Zeke and Ethan have received so much hate because they have broken a trend that too many people have become accustomed to. Parents don’t agree with the Wayland team because it is unfamiliar territory for them. They aren’t accustomed to seeing high school female and male athletes coexisting on the same field and are threatened because of it.

The truth of the matter is that Aiden, Zeke and Ethan deserve to be on the playing field just as much as any girl does. They aren’t breaking any rules, and don’t deserve to be criticized as a result.

Regardless of the criticism they faced, all three seniors deserve recognition for their willingness to do what hasn’t been done at Wayland High School in recent memory. They faced an overwhelming amount of adversity, and as a result, they were playing with a much bigger goal in mind.

“We wanted to prove to other towns that we can play the sport too,” Chitkara said. “And hopefully, we’ll see a trend where more boys will try out in [the following] years.”