Strapped to a Burden: The toll of heavy backpacks on students 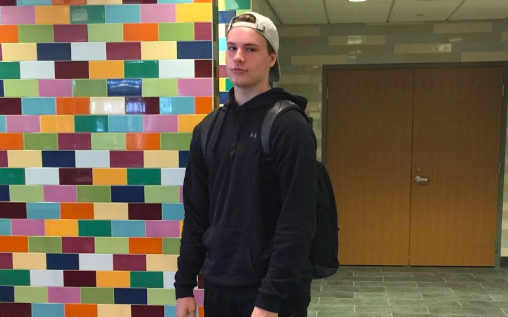 Many students at WHS find that their backpacks become increasingly heavier throughout the school year. Junior Harrison Kiesman demonstrates the ease that comes with a lighter backpack as he heads to his third block class. “I don’t think I’ve had any adverse effects thanks to a lighter backpack,” Kiesman said.

Students at Wayland High School are just over one quarter into the new school year, but have already started to struggle with the increasing weight of their backpacks.

The American Academy of Pediatrics recommends that school backpacks should not exceed more than 20 percent of the student’s total body weight. It also recommends that, when wearing a backpack, to always use both straps, tighten them and pack lightly.

According to some students, backpacks become heavier as the year progresses because papers accumulate throughout the year.

“At the start of the year, the weight of the backpack is pretty light because it’s just filled with new binders,” junior Burke Spencer said. “When you get to the middle of the year, papers will start piling up in the binders and it’s just [going to] get so heavy on your back.”

Teachers have tried switching to digital means rather than old-fashioned notebooks and pencils in an attempt to alleviate the vast amount of papers being accumulated in students’ bags. While logical, these attempts have proved to be ineffective.

“A lot of teachers have been trying to go digital for most of the curriculum, but they’re still handing out papers,” Spencer said. “And, day after day, many classes’ [work] will start piling up and it’s just [going to] add so much weight to your backpack.”

Each day, teachers are giving numerous handouts to students. In fact, sophomore Ames Hwang feels that currently, her bag is the heaviest it’s ever been during her school career. She reasons that, because she’s taking harder classes, she receives more handouts and has to take more notes.

What’s more, students at Wayland High School find that science classes are the main contributing factor to the weight of their bags.

“You get a lot of papers for chemistry, and you get a decent amount for biology, but not [as much as] to chemistry because they just give you packets on packets,” Hwang said.

Students task themselves with organizing all of their papers in an attempt to be able to find things more easily; however, this often means adding more weight to one’s backpack.

“I have binders for every class because I like to keep my papers organized, so my backpack becomes heavy,” Hwang said. “There’s a lot of handouts and notebooks; I have two notebooks: one for homework and one for notes.”

Students have already begun to see the impacts ranging from back pain to their bags breaking. Despite what many people believe, the weight of a backpack on a mundane day can be exceedingly damaging.

“It causes so much pain on your back,” Spencer said. “Freshman year, I had so many papers and binders that my bag actually broke because it was so heavy.”

But, for those students who have lighter backpacks, moving around school feels less restrictive and they feel that their posture isn’t hindered.

“It helps with posture perhaps; I don’t know if, when people bend over with their heavy backpacks, they’re harming their backs,” junior Harrison Kiesman said. “[But] it’s a lot easier to move around during the day.”

Some students that are experiencing minor back pain in the status quo hold qualms about the future.

“Right now I’m not really worried,” said Hwang. “Sometimes my back hurts, but back problems could happen in the future.