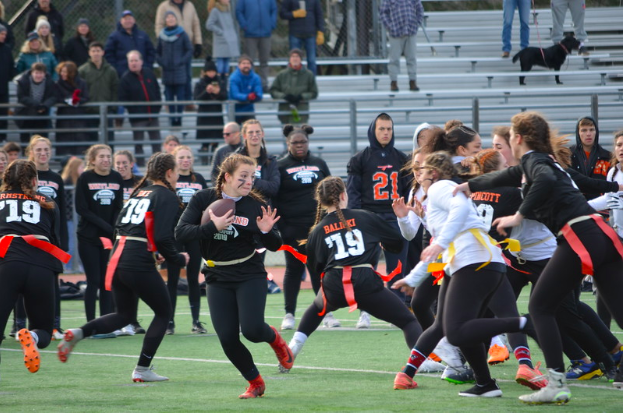 Wayland graduate Abby Mitty runs the football down the field in the 2018 Wayland vs. Weston powderpuff game. Wayland hopes to keep up its longstanding winning streak. “This experience is a very fun thing for girls to do,” senior Kayla Poulsen said.

Powderpuff is a longstanding tradition among many high schools, including WHS’ own annual game against Weston. Senior girls from both high schools participate in a flag football game, which requires a significant commitment as they practice multiple times a week to learn the ins and outs of football.

A major reason why powderpuff appeals to so many people is because it’s a chance for the girls of the senior class to have a team bonding experience while playing a game relatively foreign to them. Many play different sports, so they may not be used to playing together.

“Powderpuff is a fun way to create team bonding,” senior Ciara Murphy said. “I think it’s a great experience to have only the girls together in our grade, and it’s pretty cool to meet in the morning and bond with each other, to learn a little bit more about everyone.”

Many of the seniors have been looking forward to powderpuff ever since their first year at the high school and have been anxious to get the chance to play.

“As a freshman, I was introduced to the game of powderpuff because I saw all the seniors doing it,” Abi MacDonald said. “It was an annual thing that I was excited about and was always thinking about since freshman year after watching the game and seeing how fun it looked.”

As a tradition, the captains of the varsity football team become coaches for the girls powderpuff team. The coaches take their new roles very seriously, having planned out a strategy to prepare the girls for the game.

“We have practices twice a week, and we started really early, so we’re excited because we have had a lot of time to prepare and a lot of time ahead of us to spend on doing a lot of the basic stuff because we got a lot to work on,” senior football captain and powderpuff coach Cam Jones said.

Throughout the practices, the coaches have had to adapt to different experience levels using different ways of explaining each play, strategy and technique.

“One thing that I found is that stuff that seems so second nature to me, I have to explain in great detail because some of the girls don’t watch football and have never played football,” Jones said. “Obviously, they don’t talk about football with their friends like I do. Some things that seem simple to me are not as simple to other people. Fixing that gap has been pretty difficult.”

The amount of football knowledge varies between each player as some regularly watch football and therefore know the basics.

“Something I’m nervous about is definitely not knowing much about the game,” senior Emma Kiernan said. “I don’t really know much about it, and I’m trying to remember all of the plays.”

Although there are some nerves for the upcoming game, both the coaches and players are feeling confident about the outcome of the game.

“I think we will play pretty well,” senior powderpuff coach Marcos Pereira said. “One really positive thing about our grade is [that we’ve] got a wide variety of athletes. There is not just one girl that we’ll have to lean on, so I think we will be pretty well-fit around the field in terms of strength. I think there won’t be any major weaknesses.”

The girls are willing to sacrifice the time and effort needed to hone their athleticism. With experienced coaches guiding them through the ways of the game, Wayland is looking to repeat last year’s win.

“We have a pretty solid group,” Jones said. “We have a lot of good athletes. It’s really interesting to see people from across the other sports come together. [For example,] we have the basketball players, we have the soccer players, a bunch of different people. We have a really good group of athletes, so we’re really excited.”