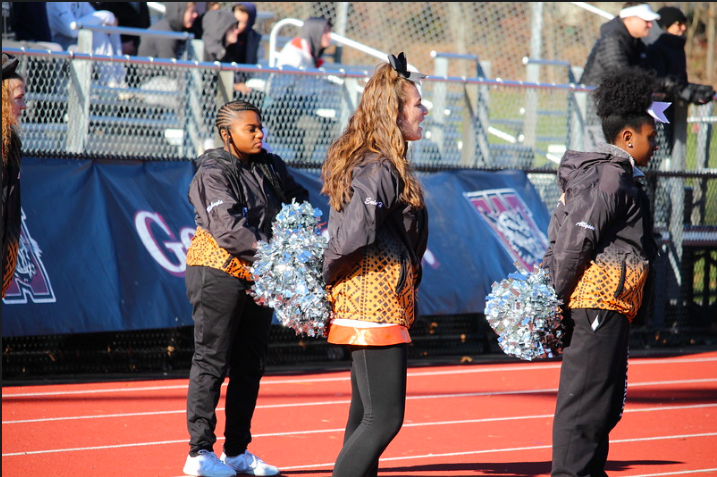 WHS cheerleaders watch intently as the football team plays against Marblehead. The cheerleading team recently placed third in the Division 3 DCL Competition. "This year's team is more engaged in [the football team] and what's happening with the team," senior cheerleader Michayla Mathis said. "We really get excited when they win but I feel like our enthusiasm is really high this year. "

As the fall season is wrapping up, this year’s WHS cheer team is finishing with a win after placing third in its DCL league. This having been its first high placing in the DCL in years, the team required much hard work and dedication throughout the whole season.

“We have really grown as a team, and our strengths have increased with our skills and abilities,” senior cheerleader Michayla Mathis said.

In order to place in the DCL, cheer teams perform in competitions where they are able to show off their skills and routines. The Wayland Cheer team participates in many of these events, hoping to place as high as they can in their division.

“During the fall season, there are two or three competitions, but the most important [competition] is obviously the DCLs,” junior cheerleader Maddie Greene said. “This year we only competed in one competition, the DCL, because for the most part, we focus on what we do at the football games. This year we actually qualified for Regionals for the first time in five or six years for Wayland. The most important [competition] to us is the DCL’s because it’s the biggest competition, and if you get a qualifying score, you go on to regionals.”

At these competitions, the Wayland team faces against many other high school teams who have also signed up to perform. Depending on the dynamic of a team, the teams are placed in a certain division where they compete against similar teams of skill.

“At competitions, there are a bunch of different schools and it’s a different place for every competition,” junior cheerleader Annabelle Cummings said. “There are a ton of teams for who you compete against, it depends on the size of your team and what division you’re in. A lot of other school’s football teams [go] to the competitions to support the cheerleaders and a lot of parents.”

This year, Wayland was placed in Division 3, and was the only team in the division. While the competition may not have been as difficult in the regular season, regionals involve many other cheer teams in different divisions, making it much more challenging and competitive for Wayland.

“We were the only team in our division, so we automatically go to regionals anyway,” freshman Amy Nagesha said. “Because it was only our district, we will compete against other districts at regionals, so we will have more people in our division to go up against.”

The competition takes place in a high intensity environment where judges have the final decision on who gets to take home the trophy.

Over the past few years, the cheer team has had a decrease in participation. The amount of athletes dropping WHS cheer caused a decrease in success and morale for the team.

The cheerleaders hope that their improved performance at competitions will increase the respect for the sport not only at high schools, but also in the sports community.

“Cheerleading is underrated for how much physical work it is because we’re lifting 100 plus pound girls in the air, and we’re doing full out routines,” Cummings said. “We’re constantly moving for two minutes and thirty seconds, doing our routines, lifting people [and] jumping.”

This season, the cheerleaders and coaches have bonded. They attribute better relationships within the team to their success.

“We all just really wanted to do well because the high school cheer reputation is not the greatest for our history in competitions,” Cummings said. “We all worked really hard and we kind of bonded more as a team this year than we bonded last year. I think we just all work better cohesively.”

With freshly gained momentum from this season’s success, cheerleaders hope to bring more participation into the team. In order to keep improving, it is vital for the team to gain new members as others graduate and leave the team.

“For next year we are really trying to recruit more people,” Nagesha said. “We are mainly trying to get the incoming eighth-graders and current freshmen. We really want more people because once the current juniors leave, I don’t want it to just be me and [freshman] Jasmine [Hasan]. We need at least a team of seven to compete.”