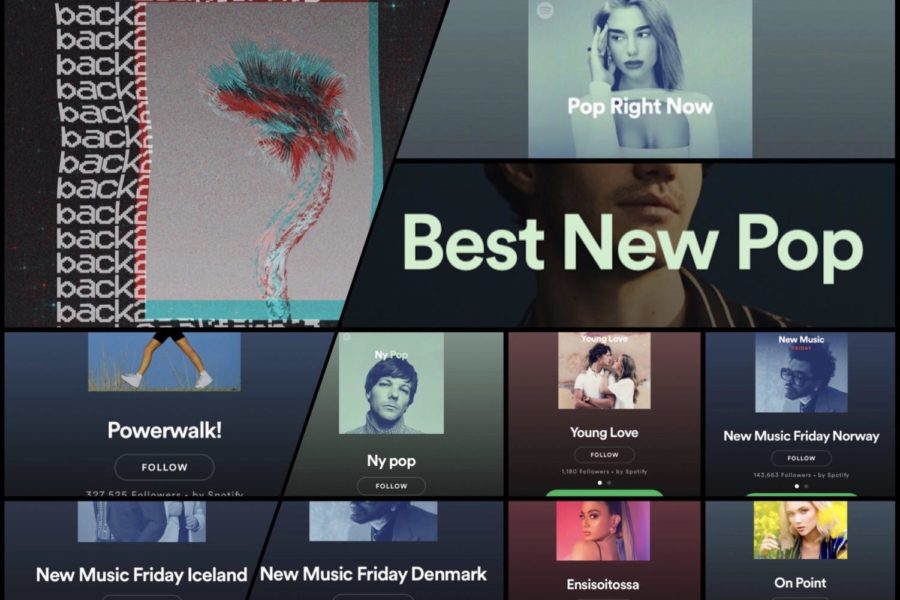 Senior Ryan Dowling releases a new song with artists Hannah Hausman and "fortune." The record was included on 11 Spotify editorial and personalized playlists. "I feel like this is the song I’ve been anticipating on making for the past three years now, and it was such a long process that I was really happy when it turned out the way that it did," Dowling said.

While WHS students got an exclusive preview of senior Ryan Dowling’s newest song “back2california” during the Spirit Day pep rally, the song was officially released on Thanksgiving day. Since the release, its popularity has expanded well outside the WHS community, earning spots on 11 Spotify editorial and personalized playlists that reach millions.

“This is the biggest milestone I’ve had in music so far,” Dowling said. “Usually, without connections through a record label or a management team, you [don’t] get placed on [any] playlist[s] if you don’t have those connections.”

For a high schooler without the support of a record label, it can be difficult to get noticed. This makes Spotify’s recognition of Dowling’s song a rare and extraordinary achievement.

“I don’t want to say it’s nearly impossible to do without those connections, but it’s extremely hard to get placement on at least one,” Dowling said.

“I was extremely surprised when we got placed on 11 [playlists] without being signed to a label,” Dowling said. “[This] means someone at Spotify listened to our song and really liked the idea. Out of those 280,000 or so songs that are submitted each week, they heard ours and thought it would be a special record to put in these playlists, which is an honor.”

The inclusion of “back2caifornia” on these 11 Spotify playlists has contributed greatly to Dowling’s success and popularity.

“[The record] was marketed to a total of 1.5 million people across all the followers of the playlists, which is really insane,” Dowling said. “I’m about to hit 50,000 monthly listeners, which is so insane coming from like 40 monthly listeners just two months ago. I know obviously that they are going to go up and down, but it’s cool to see that.”

However, the success of “back2california” was not an easy or a short journey for Dowling. The process extended over a year, beginning in summer 2018.

“I started [making] the song when I was 16 in the summer of 2018, and I worked on it for about a year-and-a-half on and off in between other projects and whatnot,” Dowling said.

Dowling’s idea of a West Coast beach song inspired “back2california,” so he began the process of creating a song to fit his vision.

“The initial part is coming up with the concept,” Dowling said. “When I came up with ‘back2california’ back in the summer of 2018, I wanted to make a fun, beachy, California-esque record, which is why I came up with the guitar melody that I played in my room.”

For the next step of structuring, writing and recording his song, Dowling worked with vocalist Hannah Hausman.

“I actually went through six different vocalists on that song before I found Hannah [Hausman], who I’m working with on this entire EP,” Dowling said. “I tried to write the song myself for like six months, and I just couldn’t do it properly. I don’t know, there was just something about the song that was difficult for me to write, so I had her write the song and then I ended up co-writing it with her toward the end.”

Dowling and Hausman also collaborated with the artist “fortune” to record, mix and create the desired sound for the track.

“I worked on the song with an artist named ‘fortune’ [whose] real name is Chris Atkins,” Dowling said. “He lives in Georgia. He actually reached out to me because we have a mutual friend named Drew Chadwick. “[Atkins] is actually really talented in terms of songwriting and recording and mixing and stuff, so he did his vocals at his house and sent them to me. I rewrote the verse of the song because it had to make sense with the guy-girl singing back and forth.”

The mixing of the track didn’t end there. Dowling next sought out a mixer to continue working with “back2california” – however, he was not completely satisfied with the results.

“I ended up paying a mixer,” Dowling said. “They did an okay job, but I had them send me the files back so I could finish the mix myself and be the executive on that end of the project. I kind of realized that if you want something done right, do it yourself.”

The price of the mixer was not cheap, leading the artists to use the song’s profits to reimburse themselves.

“We are making some money, but any money we make, we’re putting [it] directly back into the project and trying to pay it off because it is costly to find the mixers to do the right job,” Dowling said.

The financial aspect of producing a song hasn’t been the only struggle for Dowling. Managing his time to include academics while simultaneously working on his music has also been a challenge.

“In the month of October, it was quite stressful because I was applying to some colleges, I had to keep up my grades, but I also had to plan all these releases,” Dowling said. “I basically dropped everything besides music and applying to colleges so I could focus on getting the mix perfect.”

Dedicating himself to his music, however, is not a new practice for Dowling, who has been involved in creating music since he was a freshman.

“I started making music in the fall of freshman year,” Dowling said. “I kind of put everything aside in my life and stopped skateboarding, and I just kind of just fell in love with music. I just tried to master that craft, and through many years of trial and error, I’ve gotten to a more elevated spot in the music industry.”

As Dowling’s passion for music and advancement of the craft has progressed, he looks to role models such as the Chainsmokers to guide not only his musical success but also his business aspirations.

“It may sound kind of cheesy, but I do look up to the Chainsmokers just because of their evolution, and I can kind of see parallels of where I can fit in,” Dowling said. “It’s good to have someone to map your business plan after, and I feel like they’ve always had a strong business oriented side to them, which is something I admire.”

Inspired by the Chainsmokers, Dowling’s interest in the business side of the music industry is a driving factor in his plans for the future.

“In college, I hope to study music business wherever I go,” Dowling said. “I might minor in music technology, but I feel like I could keep pursuing that as a side thing and just learn the business side of [music] in more depth and detail.”

“back2california” is available on both Spotify and SoundCloud. WSPN’s initial 2018 article on Dowling, who goes by RYANVIII, is available here.