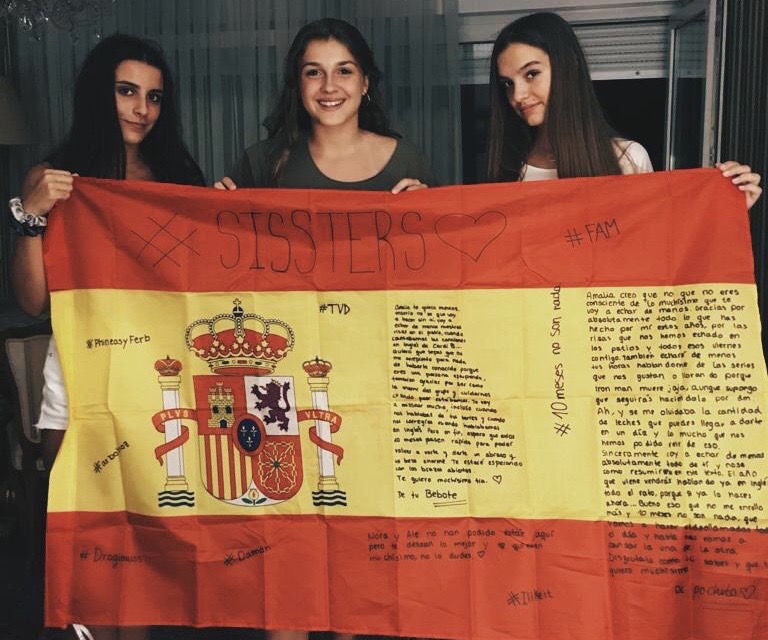 Sophomore staff reporter Amalia Rial pictured with two friends in her native land of Spain. Rial shares her experience of learning languages at a young age and argues that Americans are disadvantaged by learning languages so late.

I am one of thousands of Spanish kids that leave home to study abroad in the U.S. or Great Britain because they’ve been taught English from a young age. Few American students, with the two to three years of studying a foreign language required in high school, would be able to go to Spain and speak Spanish fluently.

Why don’t most Americans speak a second language? In America, most people don’t learn a foreign language at an early age, which makes the process of learning really hard for them. Americans should start learning a second language in first grade and continue studying that language for the rest of their years in primary school, middle school and high school.

In Spain, students start speaking English at the age of six. Most of the schools start by teaching one class in English. There are two types of programs in the same high school. The first one is that students have the majority of their classes in English. Usually, these classes are physics, chemistry, geography, history, physical education, art and, obviously, English. Apart from Spanish and English, students can study another language like French or German. In the other program, even though students don’t study the same amount of classes in English, they still take an English class. Studying English so rigorously has made me love it. Of course, there are some people who don’t like English, but you have to push yourself into learning in a way that you like.

I don’t like studying English grammar, but I love watching shows, movies and listening to music in English. So, I took a show that I had already watched in Spanish, and I started watching it in English, but with subtitles. Because I knew what was going on in the show and I remembered some of the parts, it made the work easier, and eventually, I didn’t have to use subtitles anymore. I’ve watched so many shows and movies in English that doing so now is normal for me, and every time I want to start a new show or watch a movie, I do so in English, even if I’m in Spain.

I’ve also started listening to more American music instead of Spanish, and I learn the lyrics, which helps me understand what the songs are saying. Now, I can listen to fast songs – like rap – and know what the artists are saying. If you know me, you know that I know the lyrics to so many songs – when my friends ask me how I know all that they are saying, I reply, “I just listen to the songs.”

Most of the American teenagers I’ve talked to want to quit the languages that they are taking because they feel that it’s too hard, even if it’s one of the easiest languages to learn, like Spanish. Since I arrived in America, I’ve heard friends say they don’t like their Spanish class, so one day I decided to go to my friend’s honors Spanish class. The class was fun and the teacher did a great job. The material that they were covering wasn’t hard, but some students felt stressed and overwhelmed. Because the students are older, teachers think that it is going to be easier for them to learn, so they teach a lot of material really quickly. But in reality, the fact that students started learning their second language later makes learning harder for them. In Spain, we started at an early age with really easy material and with time. Although it got harder, we had had enough exposure to the language that we were ready for the increase in difficulty.