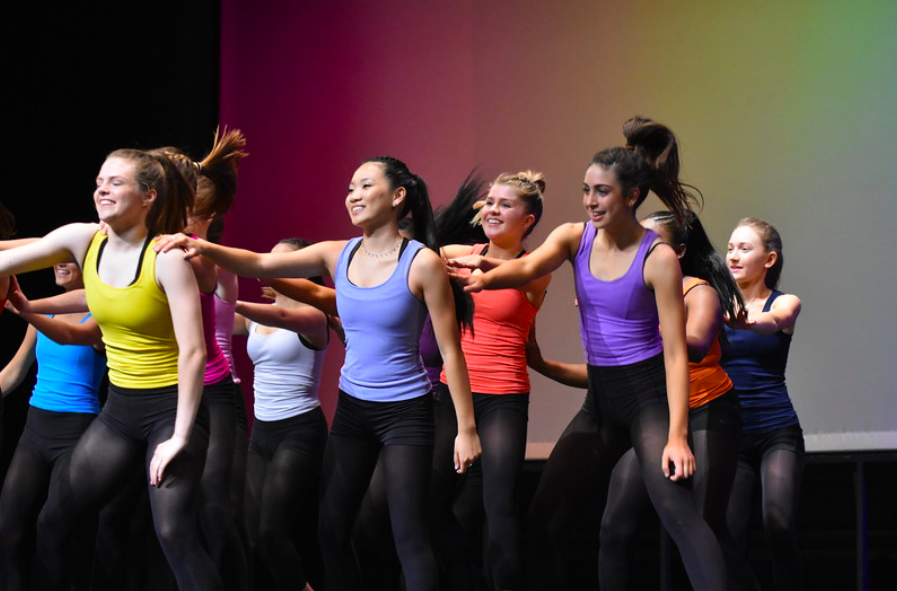 The Window Dance Ensemble dances in unison during their 2019 spring performance. “We work really hard and I think that our performances are our time to show that,” senior director Joyce Wu said.

As Winter Week approaches, the Window Dance Ensemble begins to prepare for their annual performance. Although Window is a spring extra-curricular activity, the ensemble begins earlier than most other spring activities because they perform during Winter Week.

“We’re starting the week before December break,” senior director Joyce Wu said. “We’ll be practicing about two to three weeks leading up to the performance for about two hours each.”

Window’s Winter Week performance is different from their other performances in more ways than one.

“The Winter Week performance is different from our other performances [because] it’s a lot shorter and the production isn’t as big,” Wu said. “For our spring show, we had different lighting for everything, but this [performance] is a lot more focused on the dance rather than costumes and everything else.”

Although this performance isn’t as long as long or as decadent as other performances, senior director Lily Jenzeh believes it is one of their most important shows of the year.

“Our Winter Week performance is supposed to get people to want to join Window,” Jenzeh said. “Our goal is to just show [the students] what we’re about.”

The Winter Week performance is Window’s time to spread awareness of the club and get people interested in auditioning.

“This performance is also really special to us because it’s our time to get people interested [in Window] and hopefully get new people to tryout,” Wu said. “It’s really important for us to get younger grades interested in the team to help build a future.”

Jenzeh and Wu have already begun planning the dances for the upcoming show.

“We’re planning on performing all three of our hip-hop dances, modern, lyrical, opening, closing and [the] underclassmen [dance],” Jenzeh said. “But we’re still making final decisions on the specific dances.”

“I definitely want to give the school a really good impression of our team,” Wu said. “We work really hard, and I think that our performances are our time to show that.”

Jenzeh also holds expectations for the returning Window dancers to step up and perform well in order to get others interested.

“I’m definitely just hoping that the dances look as good as they did in the spring,” Jenzeh said. “It can be kind of hard to relearn them, but I think we’ll be able to do it.”

Wu wants to fill the shoes of previous directors and lead the group to success.

“The past directors have all done a really good job, but this year, we’re really trying to be more organized about things,” Wu said. “We want to put everything on the same calendar to make sure everyone is on the same page and to stay on top of rehearsals.”

Jenzeh also wants to spend time this season focusing on activities outside of rehearsals and get quality bonding time.

“We want this season to be more than just going to rehearsals and [then] leaving,” Jenzeh said. “We want to do stuff outside of practice to get close with the team because it really makes the experience much better.”

Wu wants to make rehearsals more enjoyable this year, so her and Jenzeh plan to be more organized this year. They began the process of booking space to rehearse as early as possible.

“We’re definitely looking for more theater time to rehearse because in past years we’ve had to rehearse in the Lecture Hall a lot, so we figured that out really early on,” Wu said. “We’re also really trying to be as organized for the season to run smoothly.”