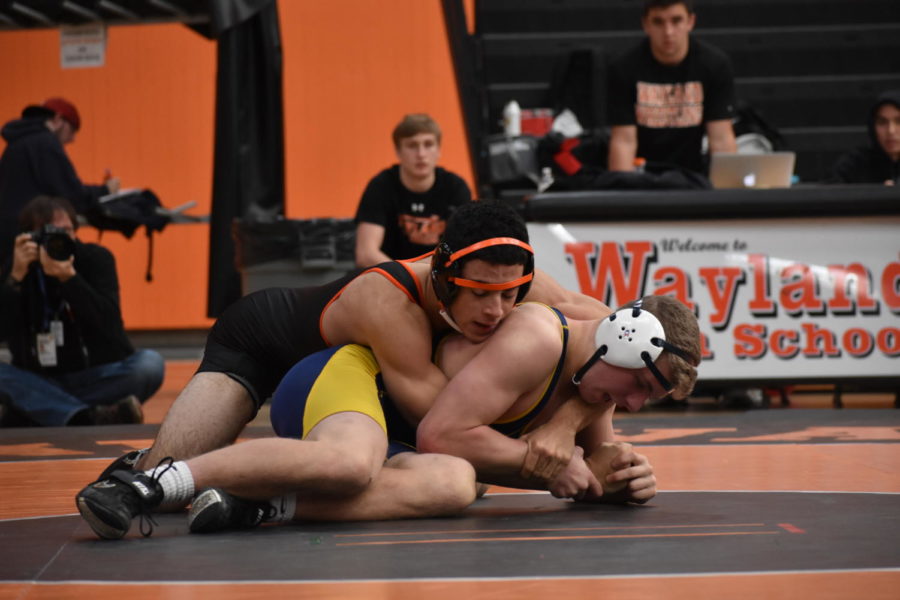 Junior Marcos Pereira holds down his Lexington opponent. "We have a lot of talented guys, so pushing each other during practice and getting each other better would be huge to get us ready for the big matches,” Pereira said.

After winning the individual state championship last winter, the WHS wrestling team is going into this season with a changed perspective. Since last year, the team has grown, and athletes are hungry for more wins.

Although the team lost some valuable wrestlers after graduation, the athletes are still optimistic and confident in their ability.

“We still have a lot of talent throughout our team, and I think we’re planning to go far in playoffs in the tourney and also individual states,” junior captain Matt Morris said.

According to Pereira, even with a loss of athletes, the team has improved its ability through gained experience.

“I think last season, we had a lot of guys who didn’t have as much experience,” Pereira said. “Last year was a lot of people’s first year, so I think that we have a lot more confidence going into this year.”

With this season just beginning, the captains are pushing the athletes to work with intensity, which is required to win another state title. For Morris, this means leading by example during workouts, thus facilitating team bonding.

“Wrestling is a very peculiar sport, so one thing that helps our team bond is that we all struggle through workouts together, and it makes a closer bond because we all know we’re going through the exact same thing in the room and on the mat,” Morris said.

The Wayland wrestling team has historically had a competitive culture in terms of strengthening the athletes and the bonds between them.

“I think the key to success is just how hard we work in the room, and that’s something that’s been with Wayland wrestling [for] as long as it’s been at the high school,” senior captain Cameron Jones said. “It’s something that just happens every year. You have a tight group of guys pushing each other in the room and working really hard and working out together and going through all this stuff together. It creates a really tight team, and we work really hard, and we push each other.”

According to Jones, Wayland’s wrestling team is set apart from other towns’ teams by this culture. The WHS wrestling Wall of Fame, which includes WHS wrestling alumni records and achievements, mirrors the attitude of the team.

“There’s such a history with winning and doing well and working hard that you kind of can’t help but to live up to that expectation every year,” Jones said. “There’s the Wall of Fame in the wrestling room, so you see all the people that have wrestled for Wayland in the past. You’re kind of competing against them because you want to do better than they did, and so there’s a lot pushing you to do well, I think in a way that not a lot of other towns have.”

The athletes also attribute their success to a fun, engaging and challenging coaching staff. By helping the athletes enjoy wrestling, the coaches produce motivated and successful athletes.

The wrestlers are ready to work hard and push each other this season in order to produce the playoff results they are hoping for.

“We have a lot of talented guys, so pushing each other during practice and getting each other better would be huge to get us ready for the big matches,” Pereira said.