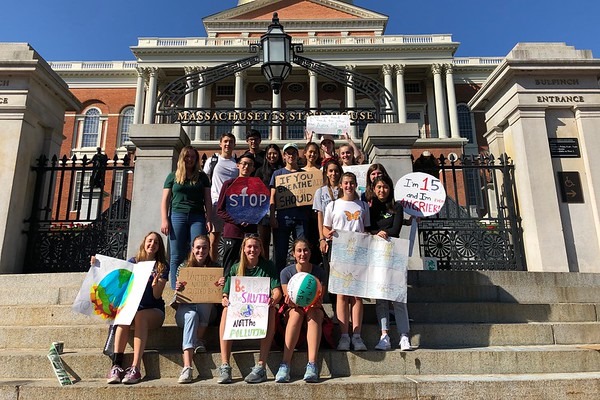 WHS students outside the Massachusetts State House during the September climate strike. WSPN's Atharva Weling analyzes the effects of climate strikes and what else students can do to help save our planet.

September 2019 was a record-breaking month in more than one way. Global temperatures were the highest ever recorded during the month of September since the federal government began collecting data 140 years ago, at nearly a full degree Celsius higher than the average for the 20th century. It’s a blatant reminder that the issue of climate change is not going away any time soon. We probably can’t prevent its effects from occurring, but we can at least take steps to mitigate them by drastically reducing our emissions.

Unfortunately, politicians across the world and especially in the U.S. seem to have forgotten the urgency of the issue of climate change. It’s been over two years since Trump pulled out of the Paris Agreement and Republicans in Congress vehemently oppose the passage of renewable energy investment initiatives like the Green New Deal. But this September, people across the globe decided that enough was enough and on Sept. 20, the biggest climate strike in world history took place, with millions of students and adults in 185 countries skipping school and work to come together and demand that politicians address climate change.

Since then, there have been several more strikes, usually confined to individual cities in which protesters pressure state politicians to take action. It was only a week ago that there was one in Boston, and several WHS students participated both in it and in the September strikes. There is no question that these strikers are motivated and that their actions are indicative of a growing segment of the population that sees climate change as a major threat. However, the question of the day is not how wonderful it is that these strikes are happening, but how effective they will actually be in changing politicians’ minds?

The unfortunate truth is that the answer, at least in the U.S., is likely not very much. Outlets like Fox News have vilified the Green New Deal for many, both inside and outside the government, and Republican and even conservative Democratic lawmakers are unlikely to change their minds anytime soon, regardless of how large the protests may be. Filibusters and other bureaucratic maneuvers by these politicians mean that climate legislation has a minuscule chance of getting signed into law if politics remain in their current state.

The only solution is for the climate movement to become an electoral movement. Every single climate advocate that is eligible to vote has to be there in November of 2020 to cast their ballot or our gridlocked Congress will continue to resist change. However, while such a solution works well for adults and students who will be 18 or older when November rolls around, for the vast majority of us this is not a viable option. So what can those of us not eligible to make a change electorally do to light a fire under politicians and make a difference?

Well, we can start by making the strikes a little more effective. The truth is that many strikers at our school and across the country are either given an excused absence by their parents or are permitted to leave by the school itself. This is not activism. Strikes require leverage for them to have an effect, meaning that there have to be consequences for the institution that are being left behind for the strike. A few students deserting the high school with their parents calling in ahead of time doesn’t sound like leverage to me. Even if a greater number of students joined and didn’t get an excused absence, the fact is that the only people feeling pressure will be the teachers who have to change their lesson plan.

But protests not having national leverage doesn’t have to be a bad thing. If a truly significant portion of our school were to participate in a climate strike, it would represent considerable leverage against our school as well as our town. While we are lucky to live in a community that is quite forward-thinking when it comes to issues like pollution and emissions, there is still much work to be done, and local strikes can be used to pressure those in power in our local society to take whatever action they can to limit climate change.

However, most people agree that the real solution can only lie with the federal government. This is something that’s not very practically accomplished in Massachusetts, a left-leaning state with a strong backing for climate policy. It would make more sense to join or contribute to strikes in swing states like Ohio or Florida, where the next round of elections is up for grabs and thus politicians are forced to adhere to the will of the people if they want to keep their positions. By putting pressure on these lawmakers, we can ensure that more climate aware representatives are put into office.

While it may seem disheartening to hear that the strikes that students have so passionately participated in had minimal effect, this should not be a point of dejection for climate activists. Instead, this should be a wake-up call. The reason that governments of all shapes and sizes are not addressing climate change right now is that they don’t think that its impacts will ever affect them and future politicians can deal with the effects down the line. If we show them that we are willing to sacrifice more to save our planet, then a short term incentive like staying in power will finally make them address global warming. Just because things look bleak right now doesn’t mean they have to stay that way, and with the commitment students have to saving our planet right now, change is not just possible, but guaranteed.