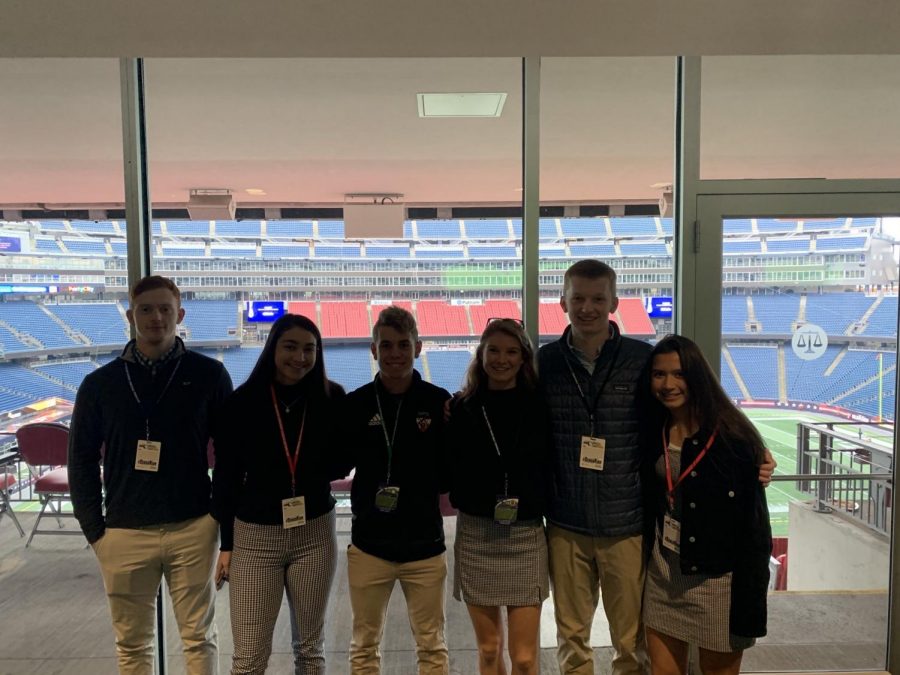 Sportsmanship is defined as, “fair and generous behavior or treatment of others, especially in a sports contest.” But this definition covers only a small part of a bigger picture of what sportsmanship really means to an athlete.

Recently, several WHS students, including myself, attended the Massachusetts Interscholastic Athletic Association’s annual sportsmanship summit with Athletic Director Heath Rollins at Gillette Stadium. The event highlighted the importance of being an athlete, but more specifically, being a leader both on and off the field.

Every year, Rollins chooses a handful of student-athletes to attend the event. When making the decision on who should go, Rollins considers the qualities an athlete should possess.

“I try to pick a wide variety of student-athletes: ones I see that I think exhibit qualities of leadership from a young age to seniors,” Rollins said. “From freshmen to seniors, I try not to be too specific, and I spread out the opportunities to as many different student-athletes as we can.”

Having been picked as one of the Wayland representatives for the event, I not only felt honored but also grateful to be a part of such a great sports community. Adding onto that, I was able to work and cooperate with other students from a wide variety of schools who have also demonstrated leadership skills.

“This is the 26th year [of this Summit], and we are basically celebrating the sportsmanship of different schools and communities and bringing everyone together here,” MIAA assistant director Robert Pearl said. “Since it is at Gillette Stadium, we have been able to open it up to over one thousand students as well as many adults. The purpose is to spread the message of sportsmanship, but also to break out workshops for the students to attend.”

We started off the summit by being introduced to a few student representatives who had received awards for their written papers defining what sportsmanship means to them. Having heard many different perspectives of the meaning of the word, I learned that showing good sportsmanship is more than just being a good teammate.

Following the introduction, students split up into two separate groups where we then met with a group of referee officials from all different sports. We watched a series of videos on the perspective of what it is to be a ref, and even got the chance to ask follow-up questions.

From that meeting, I got some insight into all the difficulties of being a ref and controlling all aspects of the game. As an athlete, I can easily get frustrated – specifically at the ref – for making a bad call or ‘favoring the other team.’ But in the end, the ref doesn’t care who wins, and is only there to make sure the rules are being followed.

“I think it’s good to hear from speakers [who have] some other personal experience of what athletics meant [to] them and really how leadership changed them at some point,” Rollins said. “I think that for a lot of people, there is an event that happens that highlights that they’re a leader and the sooner they realize that, I think that the more impactful you’re going to have, not only in athletics, but in life.”

The summit continued with another speaker performance by American track star Eddie Slowikowski. In his early years, Slowikowski came away as a Gold Medal winner for the USA Track and Field team in an international competition, became a 3-time NCAA All-American and has now mastered the role of a dynamic professional speaker. After years of experience and the hardships of an athlete, Slowikowski has generated a powerful message he hopes to spread through his speeches.

He presented the audience with a well-conducted speech that touched upon his experiences growing up as an athlete and even included some interactive parts to his presentation.

“My speech is about performance, how we live, empowerment, learning that the most important person you need to lead in your life is you, living your best life, striving to be the best version of you,” Slowikowski said. “In order to do that, you got to be aware of who that is. They just have to understand and connect with the power they have to influence others, the power of service in this world. I really want them to contribute their authentic selves to the world because I think they’re the only ones who can.”

One of his key tips was to always tell yourself that you can achieve your goals, even if they are realistically not possible. The idea is that you’re pushing yourself to actually try something out of your comfort zone, which in the end, makes you a better player, regardless of whether you succeed or fail. After reflecting on this point, I realized how this type of mindset could really benefit me in both sports and life. Whether it’s making a good skill move or having the game-winning play, it is a life lesson that all athletes should takeaway to help them in their future.

“Sports, whether you like it or not, are a very big deal in our world, and student-athletes are really looked upon as leaders already,” Slowikowski said. “So, what they do and how they act matters and it’s like the face of the schools and the community. They really have to be constantly aware of if we’re being our best here, and that’s really important.”

Despite the exclusivity of the summit, by releasing this advice to a small group of people, the message can be passed on from one teammate to another. It’s impossible to have a team with just one leader, and it is important for these leaders, especially those who attended the summit, to help others gain the confidence and qualities of a leader.

“If [students] take away one of those skills and put it into practice, and put it into use, other people will see that and will learn from that, and it will keep growing and growing,” Rollins said.

Sportsmanship: a person who upholds the qualities of a leader. A leader is someone who is able to influence others to push themselves to give their 110 percent. It is someone who is reliable, kind, strong, confident and resilient. As cheesy as it may sound, showing leadership can be summed up as never giving up, under any circumstances. Being a “leader” is being the best athlete you can be.

Before the Summit, I came in with the widespread belief that sportsmanship is just being polite to your opponents. Little did I know how much more there was to it, and the importance of sportsmanship as an athlete. Knowing all of this information, I am going back to my team as a leader, ready to help others become the best version of themselves.