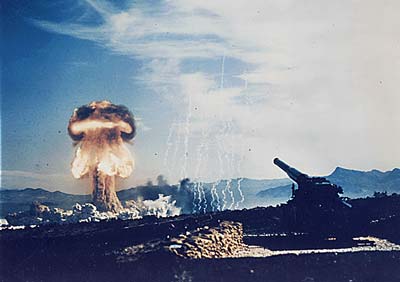 WSPN's Atharva Weling discusses the likelihood of World War III and the value of jokes about it.

New Year’s resolutions are stupid. Every time the first of January rolls around, some family member or friend will invariably ask me what big change I have decided to make to my life in celebration of the passing of an arbitrary unit of time. My response is always the same: nothing. Just because it has been 365 days since the last time I was forced to answer this question doesn’t mean that I’m a different person, and 365 days from today, that will still be true. Neither I, nor you, nor anyone or anything else in the world will change just because you’ve put on a pair of ridiculously impractical sunglasses and won’t stop blowing that darned party horn in my face.

But I was wrong. Three days into the year 2020, the U.S. launched a missile strike to kill Iranian general Qassem Solemaini, and the face of global politics was changed forever. Since that strike, Iran has launched its own missiles on Iraqi military bases with US personnel and shot down a Ukrainian airliner, killing the nearly 200 people on board. The US has imposed more economic sanctions on Iran in response. War seems inevitable.

At least, it certainly seems inevitable to the good people of Reddit. The internet has been abuzz with memes of the forthcoming “World War III” which will result from the inflamed tensions between the US and Iran. All males who are 18 years or older and in good health will be drafted into the armed forces to ensure an American victory. Jokes about the war and the draft have become commonplace both on our screens and in our conversations.

But how much truth is there to the notion that our quarrel with Iran will spark a full-out world war? Little to none, fortunately. Iran’s comparatively weak military is unprepared and unwilling to enter conflicts willy-nilly, much less against the most powerful nation on Earth. Iran’s ability to produce missiles means that it could theoretically start a regional war as evidenced by its aggression regarding the airplane incident and the Iraqi military bases. However, the actual likelihood that it carries out an attack devastating enough to provoke a third world war is minuscule. Even if Iran did, major powers like China and Russia have shown no inclinations of taking sides in this conflict, meaning a truly devastating world war could never happen.

As for the draft, it was eliminated following the end of the Vietnam War. There is almost no popular support for its return, so chances are that an already gridlocked Congress will never pass a bill bringing it back, at least not before the war is already over. Regardless, exemptions over who can be drafted mean that your chances of actually being selected if the draft were to go into effect are actually smaller than you may think. If you are still in school, obese or have a criminal record when the draft rolls around, you are ineligible.

So, if the war and the draft are all a fever dream, then these memes should come to an end, right? I mean, they are not only counterfactual but also could be considered offensive to those that had to live through actual drafts like that for Vietnam. This all may be true, but the truth is that these memes represent something more than just far-flung jokes – they represent the ability of America’s youth to use humor to comment on the situations around them.

As high school students, many of us are ineligible to vote or lack the resources to organize a wide-scale protest. We cannot make our voices heard on a more national level easily through obvious political action. However, the Internet, society’s great equalizer, has provided us with an effective method for communicating our opinions and emotions with a global audience.

The jokes about World War III that you see every time you open social media are not just jokes. They are conscious commentaries on the absolutely ridiculous situation our nation has found itself in. One year ago, tensions reaching the point they are at right now was unthinkable. Now that we find ourselves in a situation this outrageous, people have created these memes as portrayals of how crazy it really is. We live in a world where one has to be worried enough about the prospect of getting drafted that they had to look it up in the first place. Whether they actually will be? Probably not, and in that way these jokes can disrespect the sacrifice made by those who actually were drafted into the military all those years ago. But regardless of the social ramifications, the idea that this entire conflict is even a possibility is mind-blowing.

Humor has the capacity to do more than just provoke laughter. In truth, it makes you think more than a standard paper or blog post would. There’s some reward at the end for understanding the message that the joke attempts to make, so we are more inclined to attempt to do so. The message that World War III memes attempt to spread is deep down, one of fear. People are genuinely scared of the world our current government has created, one in which launching a missile at Iran was something more than the plot of a terrible action movie. Through humor, we can grasp the magnitude of their anxiety. It may not be much, but it is more than it really should be.