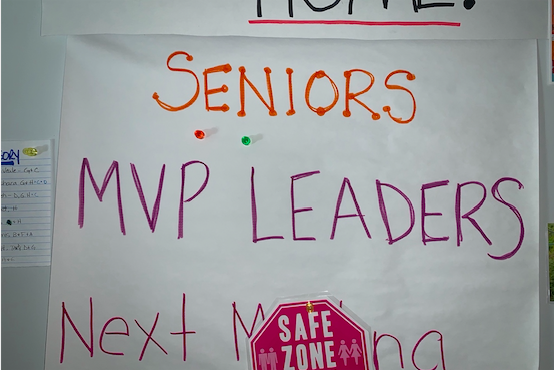 On Monday, Jan. 27, a group of senior MVP leaders presented to the Class of 2021. “I joined because this cause is a really prevalent one in today's society and I thought that by joining, I could help,” senior Stone Harris said.

For seven years, juniors at WHS have participated in the MVP program through their wellness curriculum and have later had the opportunity to join the club senior year. The goal of this club is to learn about domestic violence and how to prevent, identify and put a stop to it. The MVP model is well-respected and taught to students around the country. It allows students to have a voice against domestic violence as bystanders as well as spread awareness by talking about it.

Seniors from the high school presented to the Class of 2021 on Monday, Jan. 27.

“MVP stands for Mentors and Violence Prevention. It was initially put into place by the Northeastern football team to help educate male college and high school student athletes to use their status to speak out against violent situations,” senior George Natsis said.

The WHS method for teaching about domestic violence and the MVP class itself has inspired schools around the area.

“This is our seventh year bringing this program to Wayland High School juniors,” K-12 Athletic Director Scott Parseghian said. “Not necessarily this club, but [there are] other clubs that travel throughout the state throughout the last seven years [that] have presented what we do in our wellness classes to other high schools. Other high schools are trying to take on our model of what we’re doing here, so we’re really proud of that.”

The MVP program is not limited to the MetroWest area, as it’s a widespread method for people who are dealing with domestic violence. It allows everybody involved, especially bystanders, to take some action towards helping those in an unhealthy relationship.

“[The MVP program] has expanded into over 50 different universities nation-wide, and it looks to address sexual assault, abuse, rape and domestic violence situations. The way they do this is by focusing on this bystander model idea that even as a bystander, you can do something to prevent violent situations,” Natsis said.

MVP has a critical impact on high school and college students because they are some of the most common victims of domestic violence.

“This [cause] is important because more people than we think experience this,” senior Caitlin Newton said. “Almost 20% of women in college will experience sexual assault at some point in their four years, so it’s pretty common.”

“I joined because this cause is a really prevalent one in today’s society, and I thought that by joining, I could help,” senior Stone Harris said.

The club members hope that this continues to be a meaningful program to involve students in, and they hope the students can continue to spread awareness and mentor their peers about the fight against domestic violence.

“I joined this club because I feel like this is an issue that needs to be addressed because it’s affected my life, and I feel like it’s important to be involved in the fight against [violence],” Natsis said.