WW’ 20: “Nothing’s going to change if you don’t change something” 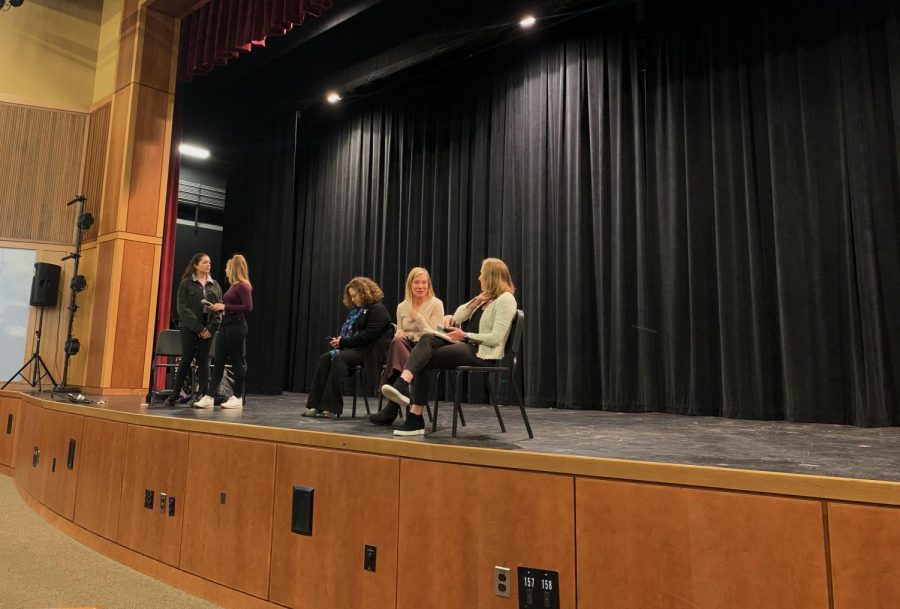 The Women’s Empowerment Club at WHS invited Becca Rausch, Angela Ferrari and Foster Newcome for a “Women’s Professional Panel,” on the third day of Winter Week 2020. The panel was a sequel to the “Women’s Empowerment” presentation, presented on Tuesday by Lauren Rikleen. Rausch, Ferrari and Newcome spoke about overcoming challenges in their workplaces as women.

“Where I work now, our corporate goal is that half the amount of people who work at Gingko have to either be female or some other underrepresented minority,” Newcome said.

In an attempt to diversify the company’s work environment, Ginkgo Bioworks has created quotas for the company. Newcome, who works at Ginkgo Bioworks as a bio technician, has challenged herself to overcome stereotypes that her male colleagues have.

“One time in a meeting, my colleague told me that I look like his elementary school daughter,” Newcome said. “He was seeing me as someone who’s much younger than my age, like his daughter. So, I researched more information and made sure I’m totally ready to talk with them and make it known that I am a professional.”

After Newcome was exposed to this belittling experience, she pushed herself so as to challenge the mindset of her colleague. Similarly, Rausch also faced experiences in the workforce as Massachusetts’s state senator that left her outnumbered by accomplished older males.

“If there isn’t a seat, then bring your own chair,” Rausch said.

Rausch didn’t give up and demonstrated the importance of perseverance by taking matters into her own hands. As a Jewish woman, she said that she has two minorities already working against her, so it was a necessity for her to strive for what she wanted, and what she knew she deserved.

“Part of it is just keeping your head down and to just keep going because there’s nowhere to go but through,” Rausch said.

Although perseverance is important, it wouldn’t be as much of a necessity for women to seize what belongs to them if the workforce treated men and women equally.

“Right now, the insurance companies in Massachusetts are allowed to reimburse less for birth if it’s midwife-attended instead of if an Obstetrician Gynecologist(OB/GYN) attends it,” Ferrari said.

Ferrari works as a midwife, a person who helps women through childbirth. Ferrari’s job is similar to that of an OB/GYN, however, the OB/GYN workforce is dominated by males. Ferrari explained that since the hospital makes less money when a midwife delivers the baby than when an OB/GYN delivers the baby, the hospital has a reason to pay midwives less.

With Ferrari doing the same work that many OB/GYNs are doing, one would expect her to earn the same salary, but this is not the reality in many cases.

Newcome thinks that the biggest obstacle is not being afraid to fail and thinking that you can be fine without being perfect.

“You might not get it the first time or the second time, but you can still succeed,” Newcome said.

Rausch agrees with Newcome that success isn’t handed to someone on a silver platter. Success comes with hard work and the support of others after failing.

“You have to be resilient. Keep coming up. You might fail, you might stumble, but you have to keep going,” Rausch said. “I really think the most important thing is to collaborate with your allies and make sure that you are not a woman on an island, standing alone, trying to fight this fight solo.”