Artist of the Month: Angela Yan 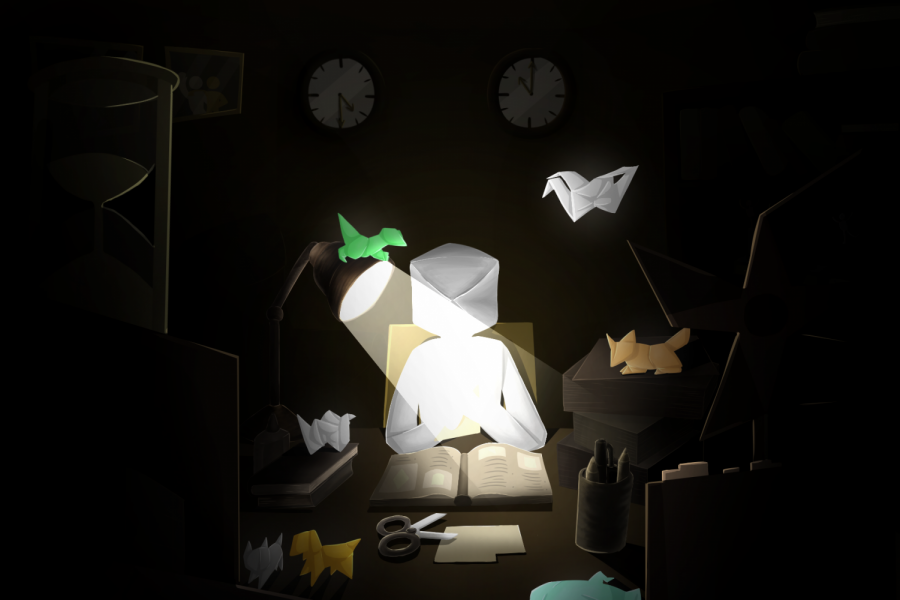 Pictured above is one of sophomore Angela Yan’s many drawings. Yan drew the picture for the Scholastic Art Contest in 2017. “I picked origami as the theme because I believed it fit really well and was a cool idea,” Yan said.

When sophomore Angela Yan was a kindergartener, she realized she had a passion for drawing. It started off as a fun pastime, but it soon developed into a talent that Yan will keep around for the rest of her life.

“I started drawing around kindergarten, so around when I was five to six years old,” Yan said. “The first [subjects] I remember drawing were books based around the pigeon from the book ‘Don’t Let the Pigeon Drive the Bus.’ I would make up stories about the pigeon and [then] draw them.”

Although Yan’s early drawings were parodies to children’s books, her drawings have since developed into much more than that. As time went on, drawing gave Yan an outlet to express herself. So, she stuck with it more and learned how to get better at it, and she realized that she really enjoyed it too.

“I started drawing because I had stories and ideas, and the best way to express them was via drawing,” Yan said. “Eventually, I started drawing classes for a couple years to get better at it, which was another motivator for me to really start trying.”

As Yan delved deeper and deeper into her newfound passion, she began to explore what the artistic world had for her. She noticed drawing styles and different patterns. Eventually, she found styles she wanted to replicate.

“I like drawing in a cartoony style, so my favorite styles revolve around more animated characters,” Yan said. “I’m really fond of Studio Ghibli movies and the atmosphere it manages to create through its’ stories. I also really like fantasy drawn in realism, because it’s so cool to imagine what worlds could be like in real life.”

Yan follows many other artists, one of her favorites being James Baxter, an artist that is known for the animations and drawings of different characters from Walt Disney Studios.

“I keep on drawing because I constantly have new ideas that I want to make into reality,” Yan said. “Sometimes I’ll see a cool idea or concept and want to see if I can pull it off, while sometimes I’ll find inspiration from videos or movies. I also just generally find it entertaining; it doesn’t take up that much energy and it’s a great way to relax.”

Yan truly enjoys drawing and is constantly trying to find her own method and style. Because Yan’s trying to find what’s most comfortable for her, she’s tried drawing both digitally and physically. In the end, Yan chose to modernize and switch over from pencils to a Wacom. Wacom is a Japanese company specializing in graphic tablets. However, Yan didn’t completely reject drawing with pencils. Every now and then she will still doodle with pencils in her free time.

“I switched to online drawing because, personally, I found it easier to draw with,” Yan said. “Being able to undo and pick multiple colors without switching pencils every few seconds made drawing a lot quicker for me. I also saw examples of digital art, and wanted to try it out.”

While Yan doesn’t quite know if she wants to pursue art professionally yet, she does know that through all the experiences that she’s had, drawing will continue to be a big part of her life.

“Regardless of whether or not I pursue art professionally in the future, I still want to keep drawing and improving,” Yan said. “Throughout the past couple of years, art has been such a big part of my identity, and I don’t think I could ever give it up.”