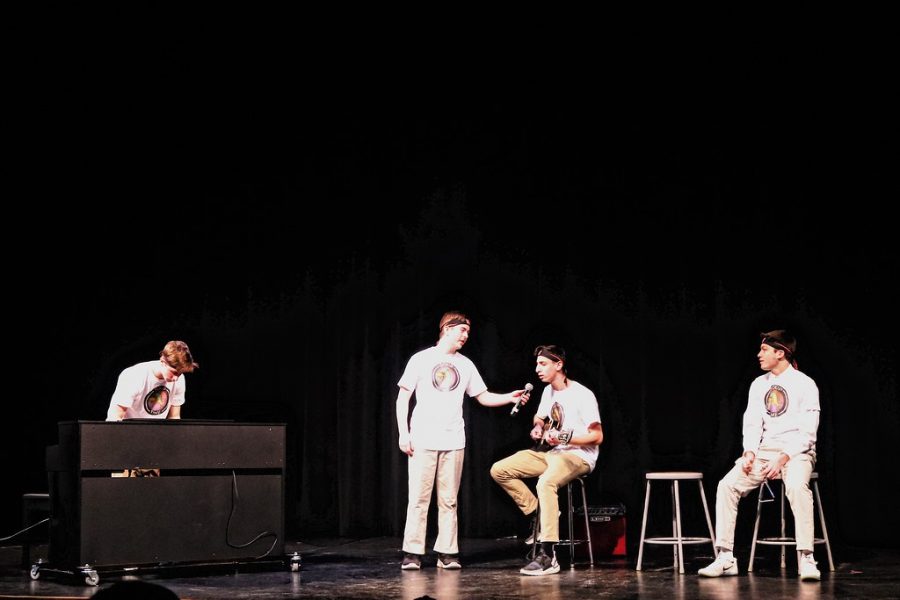 Seniors Josh Snyder, Harrison Veal, Rob Glazer and Michael Wegerbauer wrap up the talent show in their performance of "Bohemian Rhapsody" by Queen. “We all initially took [the class] because we all needed to fill our fine arts [credit] requirement,” Glazer said. “But, soon we found the class to be really fun so we started meeting up after school and eventually thought about playing in the talent show.”

WHS students enjoy the different types of performances that their peers and teachers have in store every year for the talent show, and this year, the students were especially excited to see WHS’ emerging local band, “Soup Time,” perform.

“We all initially took [the class] because we all needed to fill our fine arts [credit] requirement,” Glazer said. “But, soon we found the class to be really fun, so we started meeting up after school and eventually thought about playing in the talent show.”

The idea that the band would play in the talent show transpired years ago, but it became a reality when the group started to get together again to prepare for the show. While practicing, Soup Time also designed their own t-shirts for other students to wear.

“They did a really good job of getting the student body involved by designing and giving out their own shirts,” junior Brian Grasso said.

These shirts weren’t the only source of student involvement in Soup Time’s performance as they also implemented a t-shirt toss into the performance. This was the first time in recent memory that a t-shirt toss had been part of a WHS talent show act.

“[The toss] was cool,” Grasso said. “There was a lot of hype surrounding the band before their performance, and they kept that excitement alive by involving the crowd and giving out t-shirts.”

During the first of their two performances at the talent show, students in the crowd turned on their flashlights and waved their lit-up phones in unison, bringing the audience together in appreciating Soup Time’s performance.

“That was energetic and lively,” junior Jay Provost said. “I hadn’t seen that happen before at a school talent show.”

Now that they have accomplished their goal of performing in the talent show, many are curious as to what may be in store for Soup Time. Glazer claims that they aren’t done yet, and that they will still try to get together and make music.

“From here on out, we want to write some originals too and maybe get some stuff produced,” Glazer said. “We’re also adding a new member in, [senior Aidan Bonner], who plays the drums.”

Bonner has been independently playing percussion, specifically the drums, for a while, and he is excited to expand the band with his friends.

“Watching their performance at the talent show, it definitely excites me to join them on the drums,” Bonner said. “I hope I can help them out by adding a new instrument to the band.”