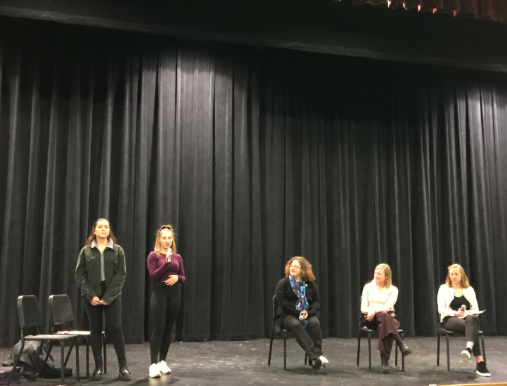 Juniors Maya Baranovsky and Zoe Sodickson present the members of the Winter Week women's empowerment panel. The panel was one of two events organized by Baranovsky and Sodickson to commemorate the 100th anniversary of the passage of the 19th Amendment. "We thought it was a really cool way to combine educational activities with something that can be interesting to watch," Baranovsky said.

As one of WHS’s most beloved traditions, Winter Week has often been prized by students, and popular events like the a cappella concert, the talent show, the hypnotist’s performance and the Window Dance Ensemble performance have become annual attractions for students to anticipate.

However, in addition to bringing back events of the past, each year’s student council is tasked with bringing in performers and speakers for new Winter Week activities. This year, students were given the opportunity to see presentations from an inspirational comedian, a naval electrician and the granddaughter of one of the first female Olympians.

This year’s Winter Week also differs from previous Winter Weeks because of its focus on social justice, especially women’s rights. Two special presentations, a speech from a female attorney and a panel of women from various fields discussing their hardships, were organized by the new Women’s Empowerment Club with support from the history department and the WHS administration.

“We centered [the presentations] around the theme of the 100th anniversary of women’s suffrage,” junior Maya Baranovsky, president of the Women’s Empowerment Club, said. “We wanted to organize a couple of events to commemorate [the anniversary] and explain to people the greater picture of how far women have come to achieve equality and how many strides we have to take to continue that process.”

This year’s emphasis on social justice caused junior Sam Goldstone to really enjoy Winter Week, with the Women’s Empowerment Panel being one of his favorite events. Overall, he considered the week to be a big step up from previous ones, referring to the comedian and hypnotist’s show as some of its highlights.

“This year’s Winter Week was pretty good,” Goldstone said. “It was definitely better than the past few years.”

Contrarily, senior Brendan Ho believes that there is room for improvement when it comes to student homework loads during Winter Week but acknowledges that teachers have certain rights when it comes to decisions regarding their curriculum.

“I don’t think a lot of teachers actually lighten the load of homework,” Ho said. “Yes, [some do], but also, they don’t really have to: it’s still school.”

Because it is their first year at WHS, the freshmen are new to Winter Week and they lack an experience to compare it to. Regardless, freshman Luke Caples thought that, while unexpected, Winter Week was still better than class, furthering that the events were quite fun.

“[The events we have] right now are pretty good and should be continued,” Caples said.

Caples believes that students’ displeasure during Winter Week was the result of other factors and that the teachers and Student Council aren’t to blame. For example, teachers have to sign up in advance so that their students can attend certain events. Due to the lack of participants allowed, often, students won’t even be given the chance to attend events.

“It’s the system rather than the actual events,” Caples said.

Still, some students with more than one Winter Week under their belt feel differently. Senior Simon Fidlin wasn’t impressed by this past Winter Week and believes that the school should bring back popular events like the k-pop performance.

“I think the [thing] that frustrated me the most was that it seemed that performance slots were used as opportunities to lecture us as opposed to [letting] us unwind,” Fidlin said.

Fidlin acknowledges the historical importance of women’s empowerment, a theme that was prevalent throughout Winter Week, but feels that it was a little hard to digest.

“At the time, I was worn out from midterms,” Fidlin said. “I honestly felt more drained after that week.”

Students were not the only ones affected by the changes in this year’s Winter Week. Teachers were also forced to make adjustments to their curriculums as well as their own in-class Winter Week relaxation activities due to the special structure Winter Week has taken on.

“We’ve gone to now all-school activities or all-grade activities, so that’s a major change,” Latin teacher Lee Krasnoo said. “Rather than specific blocks, it used to be every block there was something going on.”

With the new changes, Krasnoo believes students are able to watch more performances. The old system meant that many teachers couldn’t sign up for an event because it was full, causing many students to miss out on activities that they looked forward to partaking in.

Krasnoo also thought that this year’s Winter Week made an important improvement in its focus on social justice, believing that promoting diversity and women’s empowerment is a key part of the school’s mission.

Despite all these improvements, Krasnoo still believes that the negatives must be noticed and changed. While this year’s setup of Winter Week did allow for more student participation, it also prevented teachers from planning their own fun events as they are now forced to attend many more school-wide presentations.

“I think there’s less of an opportunity for us to do special things within our own classes,” Krasnoo said. “We’re dictated by a bigger thing. I could do something with my class that I thought was a fun thing to do, [but] now I don’t have that opportunity.”

Goldstone agrees that Winter Week could benefit from more activities in a classroom setting.