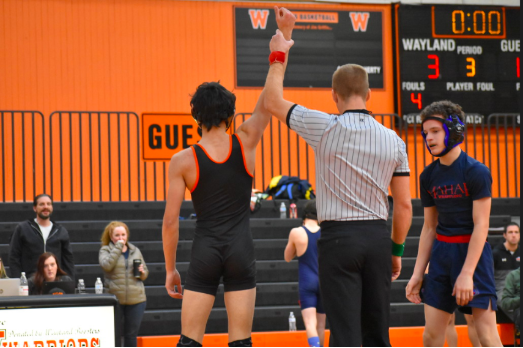 The referee holds up junior Walker Whitehouse's hand after Walker's victory in the match. The wrestling team recently won DCLs. "[Winning the dcl] is something that no one on this team has done before because the last time they won was in 2016, senior captain Cam Jones said. "It's really validating for all our hard work that we can accomplish things that we haven't done before ,so it's really good motivation that we can do pretty much anything."

After going 17-3 in the regular season, the varsity wrestling team secured its spot as winners of the DCL for the first time in four years on Jan. 29 with a victory over Boston Latin. Wayland last won the DCL in 2016 before going on to clinch states as well.

In the past few years, Wayland has come close to winning the DCL but never received the top spot because of one or two losses. Many of the wrestlers in the starting lineup are now in their junior and senior years, giving the team more experience than in previous years.

“I think because we’ve been a young team the past few years, all of these guys have been in the lineup for a long time, and I think now that we’re all older, it’s just a lot easier to get wins,” junior captain Matt Morris said.

Despite its success, the team faced its share of setbacks through the season with injuries and illnesses affecting most of the team.

“I think that we were underprepared [this year] because all the illness that’s been in the school has hit the team really hard,” coach Sean Chase said. “Every single person in the starting lineup has been sick, so one weekend you’ll have one guy out, another Wednesday you’ll have two guys out.”

Because of the team’s devotion to hard work, Wayland managed to get wins with the absence of its starters from their deep bench. The wrestlers recognize the importance of work ethic, and believe that it’s more important than the other aspects of the sport.

Other than the addition of new wrestlers replacing the sick or injured starting line, Wayland saw few changes throughout the season. The core of the team remained mostly the same, and coaches ran meets and practices similarly to previous years in order to maintain motivation.

“Every year as a team, we prepare well,” Morris said. “We definitely value a lot of hard work and teamwork together, bonding together, and working hard on the room, [which] really helps us on the mat.”

The only main difference the wrestling team experienced was the addition of tournaments along with the regular dual meets. The tournaments extend for a longer period of time and allow the wrestlers to participate in more matches.

“With more matches and tournaments, it kind of helps get them ready for the postseason,” Chase said. “The [tournaments] replicate the type of competition that they’re going to be seeing at the end of the year.”

The tournaments, however, were just one part of Wayland winning the DCL. The motivation and deep bench that the team had also allowed the athletes to feel good about their chances of winning.

“The team has a really good culture in the room, so everyone works really hard,” senior captain Cam Jones said. “It was really no surprise that we won the DCL. This is kind of our year, [and] we’ve been looking forward to this. We knew going into the season that we would have a really strong lineup, and that’s shown throughout the year.”

Following the success DCL, the wrestling team went on to sectionals – where the whole starting lineup was healthy for the first time – and then qualifiers went on to states.