Hannah Marton: I cannot imagine not playing an instrument 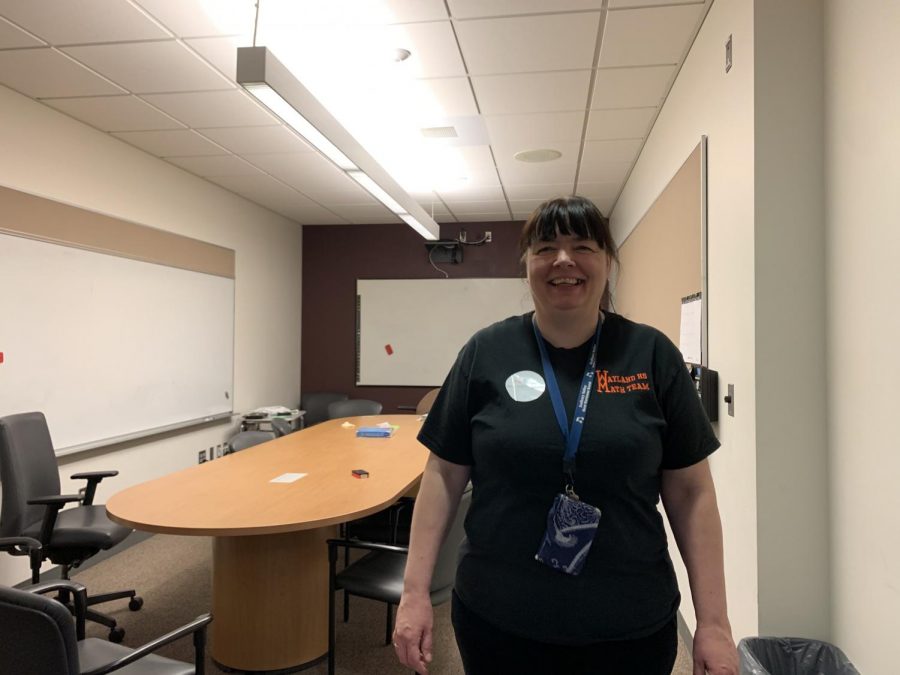 Math teacher and local aspiring musician Hannah Marton smiles for the camera. “I didn’t know what instrument to choose, so I asked Mr. O ‘what should I play? He said, ‘Smile at me. You have an overbite. Play the clarinet,’ and that’s how I ended up with the clarinet," Marton said.

For as long as she could remember, math teacher Hannah Marton wanted to play an instrument. When retired WMS band director Diane Muffitt started a band for adults who had never played an instrument or wanted to return to their instruments after a long hiatus, she jumped at the opportunity.

“Ms. Muffitt, who was the middle school band director, created a band for adults, and these were adults who either never played an instrument, or returned to their instrument many years later,” Marton said. “It’s a whole movement called ‘new horizons’ and it’s for people like us.”

Even though Marton had always wanted to take up playing an instrument, she was hesitant to join Muffitt’s band. In fact, she waited almost a year before joining some of her colleagues in learning to play.

“[Ms. Muffitt] was sending out emails that she was founding this new band, and I was really just too scared to start this, but I had always wanted to play an instrument, and after a year she sent out an email again saying ‘try it out, you have some colleagues who are doing this,” Marton said. “Like Mr. Chandler, [who] was practicing up a storm as he plays trombone in this band.“

After a year of receiving these emails, Marton was convinced that she should pursue her passion and learn to play an instrument. However, she still had one more obstacle to overcome: choosing which instrument to play.

“I didn’t know what instrument to choose, so I asked Mr. O, ‘What should I play?’” Marton said. “He said, ‘Smile at me. You have an overbite. Play the clarinet,’ and that’s how I ended up with the clarinet.”

Learning to play the clarinet has greatly influenced Marton’s life. She maintains that the learning process has been a life changing experience, as well as a source of happiness and a way to learn important life lessons.

“I learned a lot [from the clarinet]: first of all, to just embrace frustration,” Marton said.

Marton feels that her music has allowed her to connect with her students in a pivotal way. She thinks that her experience with learning to play the clarinet as an adult parallels the daily experiences of her students.

“I think that all of us teachers should try and do new things because it keeps us aware of how hard it is when you are trying something and not succeeding right away, which is what [students] do daily,” Marton said. “We are all getting very good at the stuff we teach and eventually it’s harder to see well why is this so hard, and it is very hard because learning something new is always hard.”
Marton goes further to say that not only has learning to play the clarinet allowed her to share in the experience of her students, but also served as a way to improve her teaching.

“It also changed my teaching a little bit because now just playing music allows me to have some music analogies in my lessons, which really catches the kids who are into music or are musicians, which is a nice connection,” Marton said.

According to Marton, there is an important connection between both facets of her life: math and music.

“There is so much of a connection between math and music that when I learn music, I think of [all of the] mathematical principles behind it,” Marton said. “So sometimes I actually create an entire class based on [one of these principles], and then sometimes I just pepper the [connection] in throughout the year.”

Furthermore, music has had more than just a subtle influence on Marton’s teaching. She feels that the connections she has found between music and some of the concepts she teaches need to be shared with her students.

“If I do an entire unit based on music, then I ask someone who plays a brass instrument to bring in it,” Marton said. “In the past, Ms. Muffitt came in to play french horn, and Mr. Oneschuk played his trumpet and we all [taught] the class together.”

As a teacher, Marton has an inherent love of learning. She feels that this love is, in part, the reason she took up the clarinet, but was the main influence in her decision to take up the trumpet as well.

“It actually keeps your brain young, because it is hard,” Marton said. “There are all these studies that say playing music makes you smarter anyways, because you have to pay attention to so many things at once, and that is actually why I think I picked up the trumpet too. Just to keep that ‘learning a new thing’ alive.”

Marton encourages anyone, regardless of age or level of expertise, to start playing an instrument.

“I didn’t know that something was missing from my life, and now I cannot imagine my life without playing an instrument.”