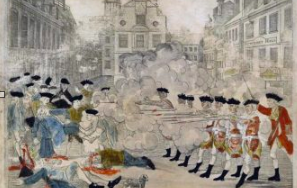 This engraving by Paul Revere depicts British soldiers firing into a crowd of Bostonians upon command from their officer and is widely known as the image that represents the Boston Massacre.

On the evening of March 5th, 1770, two-hundred-and-fifty years ago Thursday, a confrontation between British soldiers and a mob of Bostonians turned deadly. It would come to be known as “The Boston Massacre.”

For months leading up to the event, tensions were high between the citizens of Boston and British soldiers, who were tasked with enforcing new taxation laws. The death of five Bostonians, who became martyrs to the revolutionary cause, soon fueled further anti-British sentiment across the colonies. The massacre was propagandized by newspapers, and Paul Revere created the famous engraving of British soldiers shooting into a defenseless crowd within three weeks of the massacre. The event became even more controversial after John Adams volunteered to become the British soldiers’ defense attorney and won an acquittal for all but two men on trial.

The Boston Massacre is widely regarded as a defining conflict that helped spark the American Revolutionary War. To commemorate those killed, the Daughters of the American Revolution hosted a public service yesterday at the gravesite of the victims in the Old Granary Burial Ground in Boston. The tribute involved a musket salute and a wreath-laying ceremony.

The event is the first of several expected to be held across the country over the coming years to mark the 250th anniversary of the war for independence, according to the Daughters of the American Revolution.