A Voice to be Heard: WHS students play key role during presidential primaries 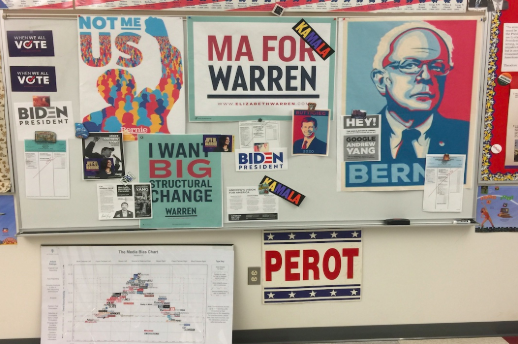 As the day for the democratic primaries approached, AP Governments students created a project in regards to the event. "Voting is essential to responsible citizenship and something I hope to be able to have each one of my students grow into," AP government and politics teacher Eva Urban said.

Voters from 14 different states flocked to the polls on Super Tuesday, and for Wayland, this meant the Wayland Middle School or the town building. WHS’s AP Government & Politics students volunteered and helped voters at these locations throughout the process.

“It’s very very powerful that every single voter has to make eye contact with a WHS student before they cast their vote,” AP government and politics teacher Eva Urban said.

The process of voting can be timely as voters must first report to a poll worker, put down the candidate in pen that they are voting for and finally bring it up to the exit where poll workers put it through a machine to record the vote. For some, this takes more time than others.

“The town hall precinct that I ended up voting in actually made me stay because I wasn’t on the voting sheet initially, so it took a long time, and I kind of had to jump through some hoops,” senior government student Josh Ellenbogen said. “I was there for a while. But once you are there, it feels good to vote.”

Voting has many different positive impacts on people. After all, residents cannot vote until they turn 18 years old. So, it is a moment people look forward to for a long time.

“In school, you learn about all of these different things – how you can vote and how to develop your political philosophies,” Ellenbogen said. “When you vote, you actually make a stance for yourself.”

Some students have experienced a gradual change starting at the beginning of the year where they couldn’t comprehend how powerful voting was. Now, however, they are able to embrace the voting process and grapple how important it is.

“Watching the progression and watching that growth has been really powerful for me,” Urban said.

The experience of working at the polls also helped students evolve as civil activists and establish a foundation of cherishing this role.

“WHS students can gain through the process [of voting] that this is something that matters,” Urban said. “And when voters cast their votes, it sends a strong message that every person’s vote is going to impact [the students] directly.”

Voting not only impacts yourself but also the entire community. In fact, it directly impacts the entire country during elections for federal offices.

“Politics affect every single aspect of our life whether you want to ignore it or not,” senior government student Zoe Hughes said. “It’s important to show people that you care about what you care about because the government is supposed to represent the people, and they’re not going to know what you want unless you tell them.”

Working for the polls is affecting students in the classroom as well. They are able to take what they learned in class, apply it to real life and then dive deeper into the topic.

“I think for our class overall, the experience of being able to engage in an actual election in a very real role [is important],” Urban said. “This is really civic action at its best.”

In other places around the world such as Puerto Rico and Guam, voting isn’t a right like it is in the United States. Many nations discriminate against various types of people in the voting process or don’t even give the citizens say over their government.

“It is 100% important to vote,” Ellenbogen said. “It is a right that not everyone has, and you should be more than willing to take 20 minutes out of your day to go.”

For those not old enough to vote or ineligible to vote, there are other ways to stay civically involved. This could mean attending rallies or researching topics of interest so that you can have an opinion when you can vote.

“I’m 17 right now, so I can’t vote,” Hughes said. “But, in the future, I really want to work on issues related to climate change, women’s rights and gun laws. Maybe one day I’ll get involved in a campaign, we’ll see.”

Hughes believes that voting is essential as a way to be heard by the government and offers advice to those who are ambivalent with regards to voting.

“Always vote,” Hughes said. “If you don’t vote, your voice won’t be heard.”