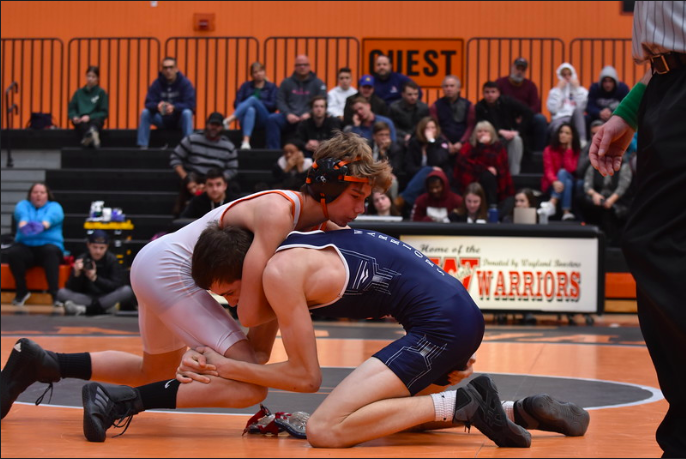 Sophomore Finn O'Driscoll wrestles a Lincoln-Sudbury wrestler. O'Driscoll, among others, gained a close relationship with former athletic trainer Chris Morash. "The next move should be finding someone like Chris because he was just a great trainer and a really good guy," O'Driscoll said.

After three years at WHS, athletic trainer Chris Morash has left the school. Athletic trainers at WHS are often the first to respond to potential injuries that happen on the field. In their close proximity to the athletes, the trainer’s office at WHS has become a place for athletes and trainers to connect with one another.

According to some students he helped, Morash had a unique bond with athletes. Where most trainers simply wrap and ice injuries and take care of wounds, Morash established a friendship with some athletes.

“Kids would just go into his office and sit and talk, and I doubt a lot of other trainers do that,” sophomore Finn O’Driscoll said.

As part of WHS’s use of ATI, a service that contracts athletic trainers out to schools and sports teams, it is subject to ATI’s decisions it makes with its trainers. In its decision, ATI has replaced Morash with new trainer Katherine Headley.

“[ATI provides] us our trainers and they monitor, do professional development [and] evaluate them as they see fit, so we’ve had Chris [Morash] here for three years, and in the evaluation process they decided to switch and put another trainer in who will start here,” Athletic Director Heath Rollins said.

According to Rollins, the switch was not only unexpected to the students, but also to the school. However, Rollins believes that the removal of Morash as athletic trainer was according to ATI’s processes as a company.

“That was kind of surprising to a lot of us [because] we weren’t aware that [the switch] was happening, so it caught us off guard,” Rollins said. “It [wasn’t] a safety issue, but [ATI] has a process it follows of who goes to what schools and how many injuries and what trainer they put in so they switched it up on us.”

While the athletic trainer’s departure opens many questions, O’Driscoll and senior Alex Kashian were confident in Morash’s ability.

“Some people kind of questioned trainer Chris [Morash’s]’ abilities, but every time I went in there with an issue, he always helped out the best he could and I felt like he never really let me down when I had an issue, so it was always a great experience with him,” Kashian said.

“He was a good trainer, but as always, he can’t, you know, perform surgery or anything like that. It was good whenever I needed a taped ankle or taped wrist. He was good at it,” O’Driscoll said.

During his time at WHS, Morash made an effort to create bonds between various athletes across different teams to create a community in his office.

“He was more in-depth with every person that came in,” Kashian said. “It didn’t matter if you were a senior or freshman, he would always try to buddy you up no matter what gender. He was always very outgoing in that regard. He was always there for you to talk to or help before a game.”

Students express sadness in the replacement of Morash’s presence at WHS as both a trainer and a friend.

“Obviously, losing him was really tough, personally,” Kashian said. “He was a great friend of mine.”