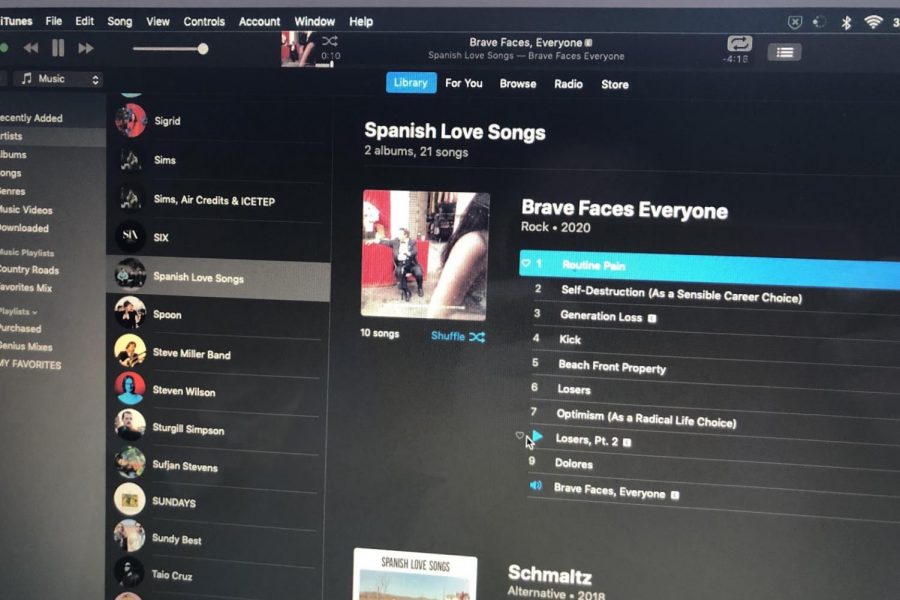 I have a bit of a confession to make–I never intended to use this outlet as a sort of “Recommendations Corner.” I wanted to be a proper critic, who not only trumpeted praise when it was deserved, but came down on records that weren’t up to par. With reviews of two records I adore already published, I was looking for an album which might challenge me as a critic, one in which I might also have the opportunity to flex some critical muscle and really tear into. Thus, when I heard about the new album from LA-based punk rock and emo group Spanish Love Songs, I pounced. Don’t get me wrong–I like the occasional Fall Out Boy and P!ATD song as much as the next guy–but I did not see myself praising Brave Faces, Everyone to high heavens.

Well, I was wrong. Brave Faces, Everyone is the sort of emotionally potent yet beautifully crafted record that also speaks to an entire generation in the vein of records like Double Nickels on the Dime or American Idiot. While their sophomore record Schmaltz, a great record in its own right, focused on inner turmoil, Brave Faces, Everyone turns its lens outwards to the tangible issues that plague many millennials.

On “Kick,” frontman Dylan Slocum sings from the point of view of someone surrounded by drug use. Whether it be his father using heroin before Sunday School or his friend who says he’s just dealing but is actually using, the narrator feels helpless in the face of something he knows he can’t control. This theme of hopelessness runs through the majority of the record. On the penultimate track, “Dolores,” the narrator reports from a hospital post-mass shooting. The beginning of this track is quiet, almost ballad-like, giving the listener a much-needed sonic respite from the constant heavy instrumentation from the rest of the album. That is, until you realize that the quiet is a sort of resignation. Why yell at the top of your lungs if no one is going to listen? He shouts at the end of the song, “They’re praying for you…isn’t that good enough?”

At the end of the day, as hard as it is to believe, this is an optimistic record. On the hook of the aptly titled “Optimism (As a Radical Life Choice),” Slocum sings:

“Don’t take me out back and shoot me
I know my circuits are faulty
and I’ve only ever been a kid
pointing out dead dogs on the road.”

This is an album not about wallowing in the seemingly never ending problems, but rather finding hope in empathy. This point is only further emphasized through the production. By using a standard pop punk sonic palette, Spanish Love Songs drive home the universality of the stories that they tell. That is not to say that the instrumentation does not deserve praise as well. For one, the bass and guitar interplay is stellar across the album, especially on songs like “Beachfront Property.” The drumwork courtesy of Ruben Duarte is also a standout, maintaining a slight off-kilter character throughout the album. And the hooks. My God. This album has hooks for days. Slocum is a force behind the microphone, bringing a warbling but powerful delivery to every track. What more is there to say? Stellar production, emotive writing, and one hell of a rockstar frontman. This is one for the history books.

And the note I made in the beginning about being a real critic? To hell with it. With a world riddled with problems and unpredictability, Brave Faces Everyone reminds us to never let go of an opportunity to do what we love. And what I love are good songs, not bad ones.