AP exams to be held online due to COVID-19 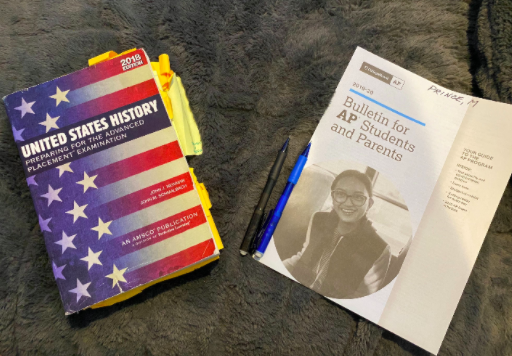 Two AP books and pencils lie on a student's bed. This year's AP tests are being moved to online and shortened to 45 minutes due to Coronavirus. "They should definitely keep the AP tests as many students take AP [exams] not only for the GPA boost but the college credit as well," junior Allen Zou said. "They also couldn’t administer tests in-person due to the current situation."

Unlike the usual three-and-a-half-hour advanced placement exam in May, the College Board has decided to make the annual exam a 45 minute at-home test due to COVID-19. The AP exam is an optional exam which most students who take AP classes opt to take towards the end of the school year.

Junior Sashwat Das will be affected significantly by this change since he takes three AP classes. Instead of studying each tiny detail, Das plans to change his study habits to looking at the major aspects of each curriculum.

“Because it’s only 45 minutes, they can only skim over most subjects and take the big ideas from each, so I won’t have to study as in-depth,” Das said.

WHS junior Allen Zou’s situation is similar to Das’ but not quite the same. Zou will be taking the AP chemistry exam in May, a test which the College Board has decided to only apply the first three quarters of content.

“College Board scrapped the last quarter of the curriculum and based the AP test on the 75% we learned,” Zou said. “There is definitely a bit less pressure on me to study because we don’t have to know the last 25% of the test. But, the test will likely make the questions harder since it’s an easier curriculum.”

Both Das and Zou are hopeful that their classmates don’t cheat on the exam, so that it’s not harder for the students who aren’t cheating to do well on the test. On the AP exam, a five is the best grade you can get, which usually corresponds to around a 60%.

“I know people are definitely going to cheat or at least try to cheat, but I really hope they don’t so the scale would be the same,” Zou said.

These changes to the test affect students from all over the country. However, Wayland students feel that they are better prepared than students from other schools due to the teachers at WHS.

“I think for most of us at Wayland, yes [we will do well] because our AP teachers have done a pretty good job cruising through the material so we know everything that will be on the updated AP test,” Das said. “Around the country, I think it could be a little unfair for some because not everyone is as prepared.”

Although these changes are unprecedented, they are not going to impact whether the majority of the students take the test. The main reason for taking an AP class is to get college credit, something that cannot be done without getting a four or a five on the exam.

“We all have studied hard in this and other AP classes, so we wouldn’t want the entire year to go to waste if we don’t take the test,” Zou said.

With the test switching to a new format, the teachers all around the country are preparing in different ways than what was necessary. If they knew that the test would be moved to this format at the start of the year, they would have taught their students differently.

“I definitely would have prepared students differently, but these changes are so specific that it seems difficult to speculate,” AP U.S. history teacher Katherine Bassen said.

Although students and teachers alike may be frustrated, many believe that this was the right move. After all, the world is in unprecedented times, and every major organization has to make changes. In order to give the students the credit they deserve, the test had to go on in a remote environment.

“Well, given the circumstances, it seems more than fair,” Bassen said. “Since everyone is doing their best to adapt to these difficult circumstances, I think the exam affords students an opportunity to demonstrate their knowledge with as much flexibility as possible.”