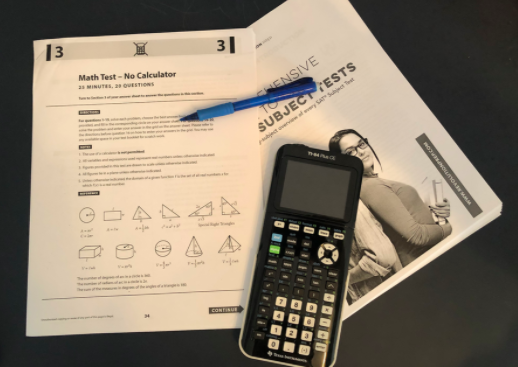 A calculator and pencil rests upon an SAT math practice test. In March, standardized tests began to cancel due to preventing the spread of coronavirus, so some colleges are moving towards becoming test optional. "I believe going test optional is fair," junior Brian Grasso said. "It wouldn't have been right to require standardized tests from everybody when most people have not had an opportunity to take them."

The coronavirus has led major standardized testing companies such as College Board and ACT to cancel their tests for the remainder of the 2019-20 school year. Consequently, colleges and universities around the world are becoming test-optional, leaving the future of standardized testing in question.

Often, students take the SAT and ACT in the spring of their junior year. However, due to Covid-19 concerns, the testing sites began to close in March, making August the next available testing date.

This year has thrown challenges at all grades because of the coronavirus. For juniors, they may have to apply to college without a standardized test score they are proud of, or no score at all.

“I believe the whole college process for the class of 2021 will be altered and optional tests will play a big role in that,” junior Brian Grasso said. “Without the ability to get a good ACT or SAT score, students’ GPAs and resumes will need to be better to compensate, and that is tough for a lot of kids to improve due to quarantine.”

As of now, the College Board is still planning to go on offering tests for the fall of 2020, even if schools are closed. It is a possibility that an online test will be administered. Although it is frustrating for students that have already studied for prior dates, many students feel reassured that there will still be a chance to take the test.

“Although my original SAT date was canceled, the College Board made a statement saying how there would be future dates,” Mastrangelo said. “So, my study habits [are] the same and I [am going to continue] studying.”

A handful of colleges and universities have announced new test-optional policies for next year’s class, however, students are afraid that if they don’t submit a test, it will work against them.

“Many of the schools I am going to apply to are test-optional already, but I am still taking [these] tests,” junior Nick Dresens said. “If I were to not submit my scores, the other parts of my application would be weighed more heavily, so submitting my test scores gives colleges a much better picture of me.”

Taking a test in the summer can be seen as much more challenging than taking it in the winter. Many students partake in summer activities with their families and friends that take up valuable studying time.

“I feel like the summertime can be a difficult time to take the SAT because of summer jobs, vacations and more,” Mastrangelo said. “Also, I assume it may be a time crunch to take them in the fall because [we are] starting the college application process [now]. I think test-optional is a good option because it can ease some stress for students not being able to take the test as many times as they hoped, looking for a better score.”

Not only are the regular SATs and ACTs canceled, but SAT subject tests have also been postponed to the late summer. The uncertainty presents unusual challenges as the tests are specific to one subject.

“I think June is the ideal time to take the [chemistry] exam because you’ve covered a year in one topic, and it’s still fresh in your mind,” sophomore Kylie Byrne said. “I believe if I decide to take the test in August, I wouldn’t do as well as I would in June because I’ll forget the little details.”

Junior and senior year present many challenges and full schedules, forcing some students into stressful situations. Because of the coronavirus, it seems that even more pressure is being put on students all over the country.

“I think it gives students fewer chances to get a good score and puts more pressure on students to do well on their first or second attempt taking the test,” Dresens said. “It may push applications back for some students.”