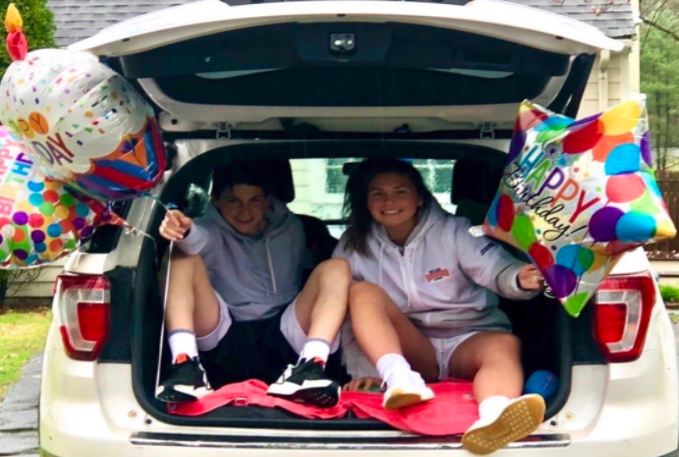 Freshman Charlie Johnson and sophomore Sammy Johnson are holding birthday balloons in the back of the car as a parade of cars go by honking and blasting music for Charlie's birthday. During this birthday celebration, many friends and families gathered to make the day special. “It’s a nice gesture to do by driving by, and should definitely be done for celebrating a person's birthday during quarantine,” Luke Caples said.

In spite of new social distancing measures that have been enforced by the government, members of Wayland and surrounding towns have found creative ways to celebrate the birthdays of friends and family members during this unprecedented time.

These celebrations typically consist of driving by a friend’s house with balloons and blaring music, though the party doesn’t last too long. These festivities have become popular within the past few weeks as they provide teenagers with a unique, memorable alternative to a traditional birthday celebration.

“These celebrations are really cool,” freshman Luke Caples said. “They’re just a simple way to express some joy instead of simply sending them a message on their phone.”

Not only do these celebrations provide teens with rare opportunities to interact in person, but they also allow families to come together in large crowds to express joy while social distancing.

“There were about 25 cars with multiple passengers in it, and it was fun because my friends and family drove by,” freshman Charlie Johnson said. “As I stood outside and saw the cars drive by, I realized there were more of my friends than I thought.”

Although everyone continues social distancing, this kind of group gesture can be an effective way to spread joy and brighten up a friend’s day, especially if it’s their birthday.

“I definitely think this made my friend’s day,” sophomore Lily Boyajian said. “I think that with everything going on, it’s really important to have the people you care about come together. There’s not much else we can do for people’s birthdays, so I think it’s awesome that people are supporting people on their big days, even if it’s just in cars.”

Now that this trend seems to be growing, many people can see these celebrations on social media. Regardless of whether people witness a drive-by celebration in person or online, many people don’t expect a celebration of their own.

“It felt really good that my family and friends surprised me like this because, although I have seen it all over social media, I never would’ve expected my own birthday to turn out this way,” Johnson said. “My birthday celebration this year is definitely one I will remember for the rest of my life.”

During drive-by celebrations, cars are uniquely decorated. Whether it be balloons, streamers or posters, there is no shortage of creativity on each car.

“Many people brought and decorated signs to hold out of their car windows,” Boyajian said. “Combine that with plenty of cars, and you have a celebration for the ages.”

Whether you’re standing in a driveway or driving by yourself, these celebrations are far from quiet. Drivers often honk their horns while blasting music and shouting out of their windows.

“It was incredible to see people do so many different things,” Boyajian said. “You could definitely hear the celebration from a few blocks away.”

With quarantine seemingly set to last for a much longer period of time than initially expected, many are hopeful that this trend will continue. The people think it is important for friends and family to come together and safely spread joy during these hard times.

“I think that birthday celebrations like this should be done more often because it made my birthday special,” Johnson said. “I want someone else to experience this.”