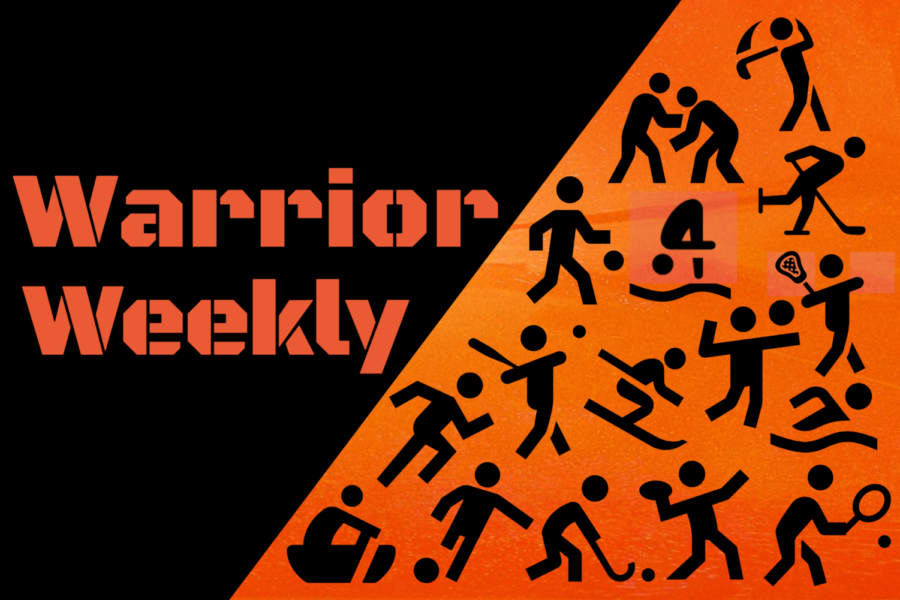 WSPN's Dante Coppola dives into how the sports world has transitioned into virtual competitions.

Madden NFL 20 Celebrity Tournament
Madden and ESPN teamed up to organize a live tournament consisting of current athletes, analysts and other celebrities. It began on April 20 and was streamed through ESPN’s digital and social media platforms. The tournament was part of ESPN’s commitment to bringing the sports community together through its #Oneteam initiative and EA’s “Stay Home. Play Together.” initiative. The baseline goal of both initiatives is to help the gaming and sports communities in finding more ways to connect during a time where people need to be physically apart.

There also were three ESPN employees: Katie Nolan, Omar Raja and former punter Pat McAfee. Not just one, but two UFC fighters joined them. One was Chris Weidman, a former middleweight champion, and Daniel Cormier, a former UFC light heavyweight and heavyweight champion. To top off the group, you had rappers Snoop Dogg, YG and Lil Yachty.

The first round saw Hopkins defeat Lil Yachty, Weidman over Freeman, Jordan over Gordon, Brown over YG, Diggs over Raja, Nolan over McAfee, Cormier over Lock and Snoop over Kelce. The finals occurred only a couple weeks ago, with Snoop Dogg and Marquise Brown facing off. And by the end of the first half, Snoop Dogg had a 12 point lead with the score 28-16. But in a blink of an eye, Brown had a 10 point advantage at the end of the third courtesy of Lamar Jackson. While Snoop put up a good fight, the result of the championship game was a 60-42 Marquise Brown victory. His reward: a $25,000 check in his name to Feeding America. And bragging rights, of course.

MLB The Show Players League
Major League Baseball had its own tournament, with a player representing each of the 30 teams. Games were aired on ESPN and MLB Network, starting in mid-April and ending in early May. The winner of the championship earned a $25,000 donation to the Boys & Girls Club affiliate in its respective community, in addition to the $5,000 already donated to each team’s cities B&G Club on behalf of each player by the MLB, MLBPA and Sony Interactive Entertainment.

In the quarterfinals, the eight teams competed in three game series’. Snell and Smith swept their respective competition, while Happ and Giolito needed all three games to advance. In the semi’s, it took all three games in both competitions for a victor to arise. Snell was down one after the first game against McNeil, before scoring 15 runs while shutting out McNeil over the final two games. Happ vs Giolito was more competitive, but Giolito still won with relative ease. This set up a Rays-White Sox finals, with the dominant Snell pitted against the underdog Giolito. Unfortunately, there was little fight left in Giolito, who was swept in the best of five series. Snell averaged over four runs per game in the series, while Giolito only averaged one.

There were seven awards given following the competition, with each award winner decided by the 30 participants and fan voting. The best player award went to Joey Gallo, thanks in part to an 11 game winning streak at the start of the competition, beating runner up Blake Snell. Best Twitch name went to Bichette with the moniker BoFlows, with Ty Buttrey and Snell coming in second and third. The best manager award went to the player who had the best record with a poor team. This honor went to Smith, who made it to the playoffs despite playing with the Orioles.

Another streaming award was also given, this one given to the most entertaining streamer. Brett Phillips took home that honor, winning on player votes but slightly losing to Garrett on fan voting. In-game MVP didn’t go to one of the competitors, but instead to whichever player played the best in the game. Aaron Hicks of the Yankees won it thanks in part to averaging one homer every two games, yet it still wasn’t enough to get New York to the playoffs. The best reaction award went to Hoskins, and best cameo, which was given to the player who played best with their video game counterpart, went to Joey Gallo. This competition may not have been the first of its kind, but it was the most successful one so far on this list.

While the seeding depended on their own player’s rating in the game, it was clear that actual talent did not translate to video game talent. After the first round Young, Ayton, Beverly, Drummond, Jones, Harrell, Hachimura and Booker remained as half of the matchups ended in an upset. That trend continued with two out of the four quarterfinals matchups ending as an upset. In the best of three finals, the two remaining players were 10th seeded Ayton and fifth-seeded Booker.

The series took place on April 11, as the Booker led Rockets faced off against the Ayton led Lakers in game one. Ayton played a slower-paced defensive game while Booker took a fast-paced offensive approach. Booker appeared to have made the right choice in game one, cruising to a 72-62 victory thanks to his hot hand from three. Neither player changed their approach for game two, though they changed their team. Booker played as the Nuggets, and Ayton played as the Bucks. The game ended almost exactly as the first one did, with Booker clinching the title with a 74-62 win. Booker, after not losing a game for the entire competition, chose to donate the money to Direct Relief and Arizona Food Bank Network in support of coronavirus relief efforts.

NHL Player Gaming Challenge
As of writing this, the NHL Player Gaming Challenge has yet to conclude, and a champion is yet to be crowned. But this video game competition is the biggest one we have seen so far. Nearly fifty athletes are participating, almost made up entirely of hockey players, besides NFL tight end Luke Wilson who is representing the future Seattle expansion franchise. There are so many competitors because some franchises have more than one player representing them, like the Bruins with McAvoy and Debrusk.

The games, which there have been three per week, have so far been streamed on the NHL’s official platforms and have also aired on NBC. At this point, weeks one and two have concluded. The first game saw the Tkachuk brothers, one representing the Senators and the other the Flames, and Noah Hanifin who was also representing the Flames. Despite being alone, Brady Tkachuk beat the Flames 2-0. That same day and time, the Stars crushed the Penguins 3-0, and a few days later the Predators defeated the Avalanche 3-0 as well.

Week two started with the Bruins, represented by McAvoy and Debrusk, against the Coyotes, Garland, and Keller. The game was much closer than the three from the past week, with the B’s winning a close one 2-1. The game pitting the Panthers against the Capitals had the same 2-1 result, with the Panthers coming out on top. The most recent game as of writing this was Anaheim’s Cam Fowler against the Shark’s Evander Kane, with the Ducks dominating 3-0. The NHL and EA Sports will donate $100,000 “in support of the CDC Foundation’s COVID-19 relief efforts,” according to a press release. This is something that should be interesting to follow as it continues to progress.

ePremier League Invitational
Electronic sports leagues featuring athletes are not just exclusive to the US. The Premier League also has held its own tournaments. Not just one, but TWO have finished. The first was in late April, and the second only just ended May 9. In the first tournament, we saw notable players like Raheem Sterling, Trent Alexander-Arnold, Wilfred Ndidi, and Wilfried Zaha representing their respective clubs. Even a few musicians joined the fun, like Tom Grennan representing Manchester United and Josh Franceschi for Arsenal.

What seems to be a common trend at this point, a talented team does not translate to success. Top five clubs Manchester United, Leicester, and Chelsea all didn’t make it past the round of 16, and Dwight McNeil’s Burnley made it to the semifinals despite the team being 10th in the league in real life. Joining him in the semi’s were Wolves, under Diogo Jota, Liverpool, and Manchester City. Liverpool made it past City 3-2, and Jota put an end to Burnley’s surprise run with a 4-1 thrashing. The finals, which had Alexander-Arnold competing against Jota, actually had Jota’s Wolverhampton team upsetting Liverpool 2-1.

The second tournament had new representatives for each team. The top five teams now had Liverpool with former left-back Jose Enrique, Man City with Phil Foden, Man United with cricketer Jofra Archer, James Maddison for Leicester, and Emerson for Chelsea. But once again, even more so this time, a good team did not translate to success. Out of those top five clubs, Leicester was the only one to make it to the semifinals. This time around, he was joined by Aston Villa’s Keinan Davis, Norwich’s Max Aarons, and Sheffield United’s John Egan. Leicester beat Aston Villa in a high scoring, 4-3 game despite being behind by two goals with only nine minutes left. Meanwhile, Egan beat Aaron’s 2-1 thanks to a late-game goal by Lungstram.

The finals were not as exciting, at least from a competitive standpoint. Maddison scored a first half brace with Vardy, then Iheanacho repeated the same feat to double their lead before Maddison added the icing on the cake by scoring with himself. Egan had a late consolation goal, but that mattered little against Maddison’s high powered offense. The prize fund was donated to the National Health Service after both competitions ended. All five of these leagues are having a massive impact with little effort needed. They are giving us a dose of sports we would have otherwise missed, while at the same time generating money to fight COVID-19 and aid people who have been affected. It is truly wonderful to witness, and let’s hope that these athletes and organizations can continue this success virtually as we continue to fight for them to one day take the field once again.