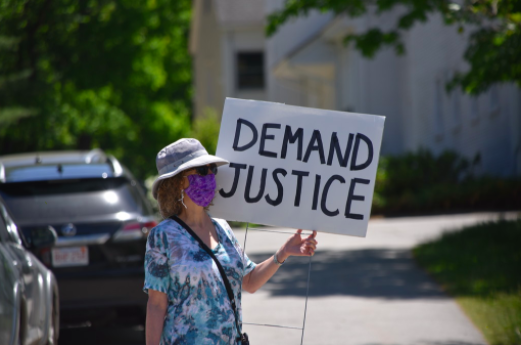 WSPN's Atharva Weling explains why the calls to "defund the police" by Black Lives Matter protesters like the one pictured below are critical to our nation's well-being.

When I first saw the phrase “defund the police” flash across my screen while scrolling through Instagram, I didn’t think much of it. It was just another hashtag amidst the host of demands and calls to action filing social media in the wake of the tragic death of George Floyd.

Then, I began to see it appear more and more every single day, and my thoughts on the matter went from apathy to skepticism. Defund the police… what? I understand that people might be upset at law enforcement; they have every reason to be, but we can’t take away their funding. What about all the crimes that need to be prevented? What about all the criminals that need to be apprehended? They certainly aren’t perfect, but we need to have police officers for our society to function; otherwise, there would just be chaos.

After doing a little research into exactly what people meant when they asked government officials to defund the police, I realized that what they’re demanding isn’t as outrageous as I initially thought. In fact, it’s a change that should have happened a long time ago. Not only do we need to send a message to our nation’s law enforcement that bigotry can not and will not be tolerated, but we need to seriously reevaluate exactly how much money our law enforcement really needs to do its job effectively.

State and local governments now spend, on average, twice as much on law enforcement than they do on cash welfare programs. In several major cities, this amounts to forty percent of their municipal budgets being spent on the police. You may think that this makes sense; you can’t put a price on preserving safety. However, whether that money is being put to good use is the real question we have to ask when considering exactly how much to allocate to police budgets, and the truth is that we don’t really know where police money is going.

We spend well over $100 billion on law enforcement every year. Still, because of the power of cop unions to preserve secrecy in police dealings and the antiquated methods used to collect data about the police, we don’t really have a good idea about where that money goes. For all we know, it could be going into technologies that are either unnecessary or inefficient that do nothing to keep people safe while wasting taxpayer dollars.

Even more distressing is that this much spending on police really isn’t needed anymore. We only began throwing so much money into law enforcement during the 80s and 90s, when the war on drugs came into full swing. State and local governments under federal pressure began enacting harsher sentencing laws for drug possession and consumption, forcing them to allocate more money towards police officers to catch offenders and prisons to lock them up.

But now, crime rates have fallen nearly fifty percent since the 90s, and the need for this much money to be spent on police is just nonexistent. Why should we funnel our resources into an agency that prevents crimes that don’t happen?

At the same time that crime rates have fallen, America’s rankings compared to our counterparts across the world in healthcare and education have dropped drastically. The problem is set to get even worse as the coronavirus pandemic rages on. Online alternatives to in-person classrooms have proven to be less effective, not to mention that millions of students who lack access to the internet cannot receive an education at all. Unemployment is steadily rising as the stock market collapses since most businesses are still not able to reopen. Poverty is set to rise dramatically in the coming years, but our leaders are choosing to spend our money on racist police officers rather than effective poverty-reduction solutions?

In fact, wouldn’t the best solution to crime be poverty reduction? Desperation and poor living standards are what drive people to commit crimes. If welfare programs meant to improve living standards and reduce poverty were to be put into effect, we could see crime drop even more than it already has. Our leaders are spending their money on treating the symptom of crime rather than poverty, the underlying condition.

Right now, it seems highly unlikely that the police are actually going to be defunded. As I said earlier, cop unions have a lot of power in our country and would likely prevent any defunding bill from getting passed. That’s why it’s more important than ever to let our voices be heard. Take to the streets, sign petitions, and make sure to vote this November. Our law enforcement needs to learn that it is not their job to waste our money committing egregious acts of bigoted violence. Defund the police. Now. Seriously.