Making up for lost time: Wayland athletes look to resume team sports over the summer 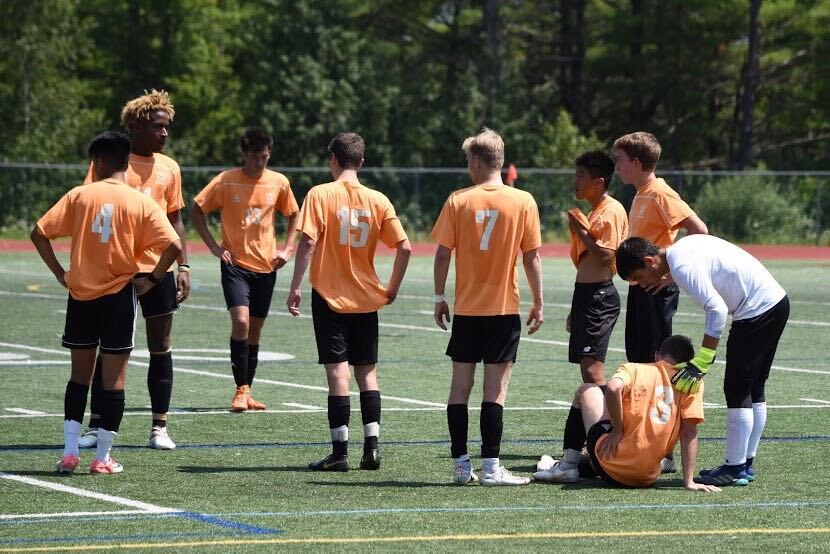 The Wayland boys soccer team talks during a preseason game up in Maine. This year's Maine tournament has been cancelled. "An invite-only soccer team usually goes to Maine at the end of July to participate in a New England wide tournament, however it was cancelled this year," varsity soccer captain junior Zach Campana said. "Instead, we are going camping with the boys who would have gone to Maine so that we can get a close bonding experience with those same guys."

With the spread of coronavirus slowly coming to a halt, Wayland athletes are planning on resuming their various sports training. Many fall sport participants are looking to work over the summer as if the season will start on time. Additionally, athletes who have missed out on crucial recruiting opportunities in the spring are looking to gain more exposure by club sports over the summer.

To prepare for the fall season, many different teams participate in a wide variety of events such as leagues, captains-practices, and camps. For the Wayland football team, this usually includes a week-long trip to Camp Caribou in August.

“Camp Caribou is a normal summer camp for kids up in Winslow, Maine,” varsity football captain junior Matt Morris said. “Because the football team has a connection with the owners, we usually take a trip down there the week after they send the normal campers home.”

Many camps, like Caribou, are canceling the beginning of camp, hoping to delay for enough time until they can safely re-open for campers. For the camp, this means that they must have adequate safety procedures in place.

“As of right now Camp Caribou is not opening for normal campers, but we are still waiting to see if they can get us in for our week later in the summer,” Morris said. “I’m sure the camp owners and counselors would try to follow the guidelines and restrictions put on summer camps to the best of their abilities.”

The football team’s recent successful seasons have been largely attributed to their bonds off the field. Camp Caribou helps form these relationships between players of all ages.

“Team bonding and brotherhood are some of the main focal points while up at [Camp Caribou],” Morris said. “This helps with our overall team coordination and commitment to both the team and your teammates on and off the field.”

Other teams choose to play in games against other towns over the summer. The Wayland boys soccer team participates in a scrimmaging league around the MetroWest area. The league, known as “Twilight,” is a great resource for the new members of the team.

“Including the whole program [in the league] is beneficial because it allows the new guys to potentially get some time to play with the returners to the program,” varsity soccer captain junior Zach Campana said. “[New players have the chance to] get their names on the captains’ and coaches’ radars.”

The Twilight League has already announced their protocols for the season ahead. The goal, to stay safe while providing opportunities for local soccer players.

“Twilight is, as of now, starting the week after July 4,” Campana said. “There will be social distancing and mask-wearing on the sidelines, and on the field, there will be less intense defense and less contact overall.”

Many athletes also choose to play their sports in a club setting. Club sports work around the high school season. For lacrosse players, that means playing in the summer. Club teams have been trying to begin practicing and playing in tournaments all over the country.

“There aren’t scheduled practices like normal, people have to sign up for individual ones and they’re optional,” sophomore club lacrosse player Lily Boyajian said. “I was signed up to go to [a tournament] in Maryland, but that was canceled.”

The objectives of playing in the summer are different from playing in the high school season. The immediate goal isn’t to win state championships, but to practice and work to get ready for the regular season, with this comes the opportunity to impress both high school and college coaches.

“The more you play and put yourself out there, the more opportunity will come your way,” Boyajian said.