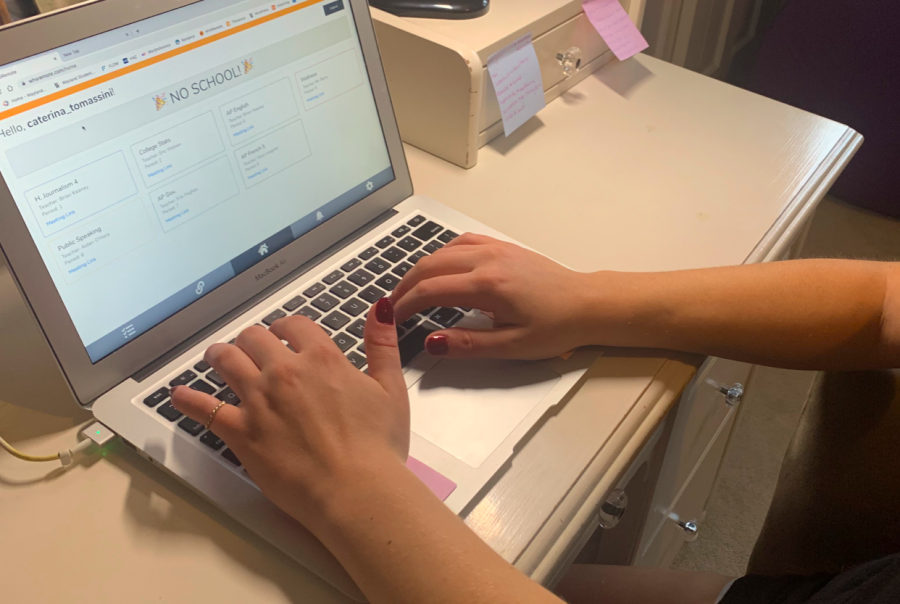 With remote learning approaching its third week at WHS, students are beginning to navigate a new way of learning. Some students are adjusting well while others are struggling to adapt, so WSPN's Atharva Weling and Caterina Tomassini sit down with students to discuss the pros and cons of online school. “Everything’s online, so it’s easy to sit down with my computer and get all of my work done," senior Luca Norian said. "I don’t need to take out a bunch of worksheets, so it’s very easy to get everything done in one session.”

With the coronavirus pandemic continuing to pose a serious risk to public health, on Aug. 31, Wayland High School Principal Allyson Mizoguchi announced the school board’s plan to start the year under a remote learning model, with the plan to switch to a hybrid model in mid-October if health conditions are favorable. Now that the first few weeks of school has ended, students have developed a variety of opinions regarding how effective online instruction has been and what effect it has had on their physical and mental health.

After last spring’s hastily put-together online learning strategy, which was a source of concern for students and parents alike, senior Luca Norian was hesitant about starting out remote this year, thinking it would be a disaster.

“I thought remote learning was going to go terribly because the way we finished school last year was so disorganized, and I was unmotivated since it felt like it didn’t even count,” Norian said. “Everything was just for credit.”

However, Norian soon found that this year’s online education would be very different from last year’s. He has greatly enjoyed the experience, especially because of all the new online learning applications he gets to use.

“[Online learning] forces teachers to update the way they teach, and they are using new tools and websites that I’ve never seen before but love,” he said.

For freshman Juliana Perdomo-Barrios, last spring’s remote learning experiences were encouraging, and those, combined with her independence, has made the remote model fairly easy to manage.

“Since we already had a couple of months on remote learning [last year], I think it was just easier to adapt especially since this year it’s nothing new,” Perdomo-Barrios said, “I don’t really need extra help or anything, so I can learn pretty quick so I guess that helps as well.”

Senior Sophia Mastrangelo feels similarly, as she feels that the transition to a remote model hasn’t been too demanding despite the changes from last spring.

“It was definitely different because it was a whole new experience,”  Mastrangelo said. “But, over time I feel like I’ve adjusted to it. It was slow at first, but I’ve found my way and started to adjust the best I could.”

More important than missing in-person classes, however, has been the effect of the remote model on Perdomo-Barrios’ ability to participate in extracurricular activities. Her volleyball season, which is traditionally in the fall, has been pushed back to February due to the pandemic, and the lack of any information about other activities has made it difficult for her to join remotely.

“A couple [of] high schoolers came to our school and just talked about clubs, but not so much that we knew which ones to do or how to sign up for everything like that,” Perdomo-Barrios said. “So I don’t really know what clubs are available right now.”

While her academic adjustment has been fairly easy, Perdomo-Barrios has shared one obstacle with that other WHS students may have experienced: frequent headaches. Although she has been caring for these headaches with medicine, she still believes that her learning would be much improved, especially in the afternoon, if they weren’t an issue.

While the physical effects of remote learning have been an issue, Perdomo-Barrios has had little in the way of mental health issues. She attributes this to the time management skills she learned in middle school and finds that the remote model helps her get more of her work done the day it’s assigned.

Norian, like Perdomo-Barrios, feels that the remote setting provides new opportunities to be independent. He found that, unlike during a pre-COVID-19 school year, he has more freedom regarding when he has to do his homework. In this schedule, classes don’t meet every day, so Norian does the majority of his homework on Sundays and on Wednesdays, which are meant for student independent work and office hours.

“It’s the feeling of independence that helps me get my work done,” Norian said. “Everything’s online, so it’s easy to sit down with my computer and get all of my work done. I don’t need to take out a bunch of worksheets, so it’s very easy to get everything done in one session.”

While Perdomo-Barrios may not be experiencing mental health problems, a significant portion of WHS students have expressed otherwise. In a WSPN survey of nearly 270 students, 43% say that their mental health has declined under the remote model and 73% say that going back in the hybrid model would cause an improvement. Norian agrees.