Mingle Li: Joining a meeting is as simple as clicking a button 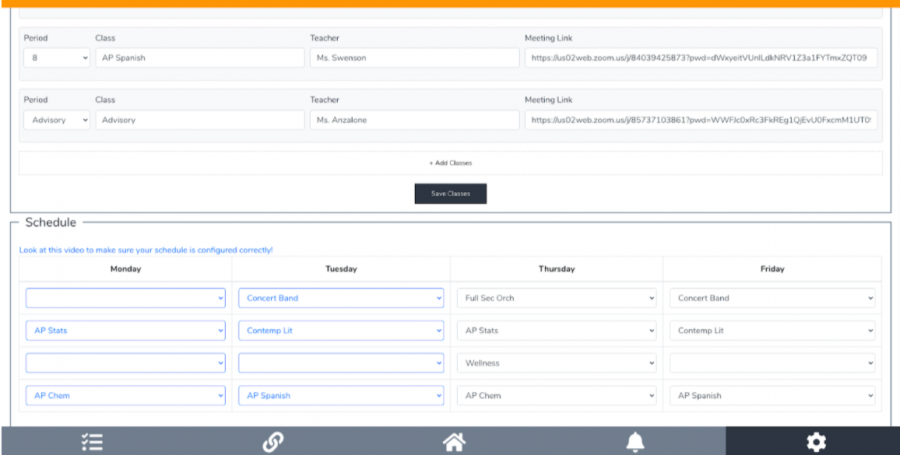 Senior Mingle Li developed an application called WHSRemote that allows students to configure their classes and Zoom links in one simple spot. “Say on Monday, you have four classes. I [needed] to represent that with some sort of structure,” Li said.

When school went remote this past March, our way of learning changed as we knew it. Students went from remembering classroom numbers to having to keep track of endless Zoom and Google Meet links. For many, this became a hassle. For senior Mingle Li, this became an opportunity. Mingle Li developed an app called WHSRemote that allows students to keep track of remote learning in an easy, simple spot.

“The essence being managing zoom links was a hassle and very disorganized,” Li said. “And so the app allows you to configure your own classes [and] configure your courses that you’re enrolled in.

It’s only fitting that someone would create an app to track a remote learning lifestyle, but Mingle Li did it more thoroughly than expected.

“The app will figure out which class you have based on how you configure your schedule, and then a simple button will pop up prompting you to join the meeting,” Li said. “Then there are some additional functionalities like a page for quick links [ItsLearning, Google Classroom, Eschool, Naviance, etc.].”

This is not Li’s first rodeo when it comes to creating apps as he has created several in the past, but WHSRemote was his first one that took off. This app has gotten immense attention from Wayland community members. People have posted about it on Facebook, spreading the news by word of mouth and beyond.

“One of [my other apps] was called WHS Helper, which is essentially like WayTab where on a normal school day it could manage your eight-block schedule,” Li said. “And then I had an idea to make a bus tracking app that never launched because of COVID-19, unfortunately.”

An app with such complexity doesn’t come to fruition overnight. It takes time, knowledge and patience.

Coding has become increasingly valuable in today’s age. Finding places to learn to code isn’t always easy, so given its value, it shouldn’t be taken for granted.

“I learned the skills to create this app through two software internships, in the summers going into my junior and senior year,” Li said.

These internships provided Li with all the information he needed to create his app along with knowledge he will take with him for the rest of his life.

“I learned the front end part which is what’s ‘displayed’ on the website [appearance],” Li said. “I coded it with React.js, which is the programming language I learned at the software internship going into junior year.”

While the appearance of the app may seem like the most important part because it’s what users see, the backend of the process happens to be the backbone of the whole project.

“I learned authentication and authorization during my second internship,” Li said. “This helps keep everything secure and only let the right people in. This uses the Java programming language for the backend of the app.”

From a young age, some people want to leave an impactful mark on their community. This is something that Li values and has wanted to carry out through the process of developing and delivering WHSRemote to the greater Wayland community.

“Ever since middle school, I have wanted to leave an impact behind on the community,” Li said. “The best way I could think of doing that is using my technological skill that I have been accumulating for the past ten years.”

Many people have considered Li to have done something monumental for the community, and that is something he values greatly and takes a lot of pride in. Creating an impact on Wayland is what Li has been hoping to accomplish for years, and to finally do it, means everything to Li.

“I’ve had the initiative to try and leave an impact on the community for a while,” Li said. “When I see the 500 students that are signed up and using WHSRemote, it makes me feel empowered because this is how I’m leaving an impact on helping others. This will be something that people will remember long after I’m gone.”