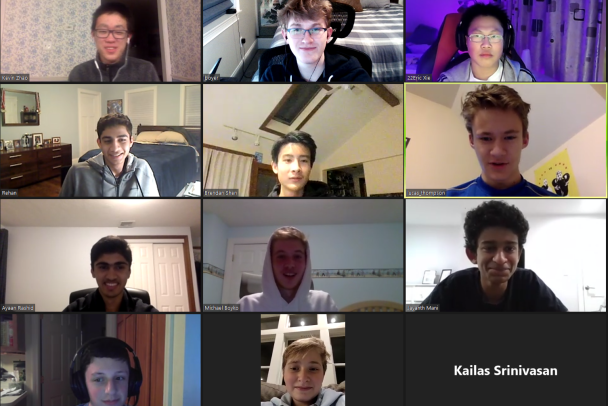 The Wayland High School Computer Science club comes together to plan for their upcoming hackathon. It will take place on Friday, March 26, and all the planning is completely student run. "This is the first time the people in the club have to make a hackathon," junior Eric Xie said. "I think we're doing well. There's a lot of work put into this, and we hope it doesn't go to waste."

The Wayland High School Computer Science club, led by juniors Eric Xie, Andrew Boyer and Kevin Zhao, is creating its very own virtual “hackathon,” an event where many people come together and code. If all goes to plan, it will run from Friday, March 26 to the end of Saturday, March 27. There are many difficulties in creating such a huge event, so they decided to split up the workload between three groups: marketing, website and sponsorships.

“I think the most important thing is to first explain what a hackathon is,” Xie said. “People probably think you just ‘hack’ something, but it’s [very] different. There is one overarching theme for everyone there, and then all participants do their best to develop just about anything related to that theme. For the hackathon that we plan on starting, the theme will be remote learning.”

The name “hackathon” might seem mischievous and misleading, but it really does fit when considering the various definitions of the word “hack.” It’s called a hackathon because the participants develop a “hack” related to the theme, similar to a life-hack video, where creators find an easier way to deal with an everyday nuisance.

“Our plan is to have [March 26] be an opening ceremony, [and] maybe have some speakers,” Boyer said. “A few keynote speakers, maybe just one, and then we drop the prompt like ‘hey, this is what you’re gonna do.’ After that, we let them loose, and they can ‘hack’ all night and all of Saturday. Most of Saturday, though, is [going to] be some speakers/lectures and workshops, and finally, on Saturday night there will be judging. So far, we have Mr. Hopps as a judge.”

While the initial planning for the event is complete, hackathons require more than just a general schedule. The hackathon needs sponsorships for prizes, a website to have people sign up and marketing to get people to attend in the first place.

“We have to make a website that lets people sign up while also giving them the logistics of the hackathon,” Xie said. “The website also has to be able to show the sponsors we have.”

The task of creating a proper website was tackled by a team of the CS club members.

“We’re doing our best, but right now it’s a bit difficult,” Zhao said. “We’re using Google Sites as a structure for the website, so we can get the design and setup of it done. We have our repository setup, [a storage location for code], but it’s hard to get it done.”

Even when they’re able to connect their code onto an actual website, they still need the information from the sponsor’s team to polish the website. Sponsors are also required to fund the prizes of the hackathon.

“Last year we had the Sudbury Coder School as a sponsor,” Boyer said. “We’re also promoting sponsors by having workshops that are run by the sponsors. We’re also asking for speakers to come and have talks on topics like machine learning. These workshops will mainly happen on Saturday.”

There are also pre-hackathon workshops that the CS club will run to help people that don’t know how to code participate in the hackathon. In order for the club’s efforts to not go to waste, they need people to attend the event. In hopes of gaining recognition and interest, they joined a collective group of computer science clubs called Hack Club.

“We were hoping some of those clubs [from Hack Club] could join our hackathon,” Boyer said. “I really hope that Hack Club can help with the hackathon, but even if it doesn’t, it seems like the hackathon can still run smoothly without them.”