Athlete of the Month: Luke Tacelli 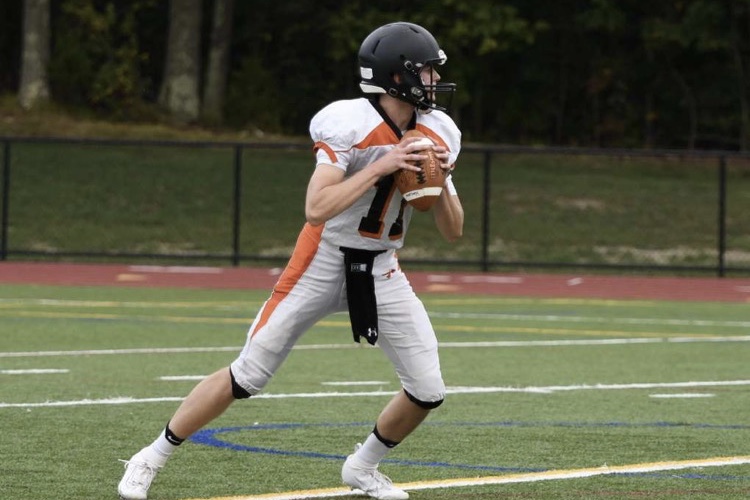 Senior Luke Tacelli prepares for the upcoming season. The football season was pushed back due to COVID-19. "I am really excited for this upcoming football season because I have worked really hard for it and been waiting for a long time," Tacelli said.

As the football season approaches, senior Luke Tacelli reflects on his love for the game. Tacelli will be continuing his career after high school at Rhodes University in the fall. Tacelli believes his drive to become better and his love for the sport has helped him succeed. In the upcoming season, Tacelli hopes to finish off his last season strong.

From a very young age, Tacelli became interested in football. His dad was a big part of this interest and helped him become a better player.

“I used to watch football games with my dad when I was younger, and he taught me how to play,” Tacelli said. “I officially started playing in second grade.”

Hard work and dedication are not the only things that make a player successful. Tacelli believes a good understanding of the game can make a player great. A team can flourish when they have players who can read the field and know what to do and when to do it.

“I would say my football IQ and knowledge of the game make me a good player,” Tacelli said. “I would say I’m best at understanding the game and reading the defense, which helps me succeed.”

Tacelli enjoys the competition aspect of the sport most. Wayland football competes against hard teams, which test their abilities and strength as a team.

“The competition and the excitement of just playing are my favorite parts,” Tacelli said. “Competition is what makes playing sports fun because, without it, it wouldn’t be exciting or interesting.”

The work behind the scenes at Wayland is where some of the players generate their success. The weight room, where the team trains, is bustling with players completing workouts. Every day, there is usually a workout for the team to complete, and there are rarely any off-days.

“The hardest part is how much work goes into it behind the scenes, with off-season workouts and off-field activities,” Tacelli said.

Tacelli is looking forward to his upcoming season, but this will not be his last season playing football. He will be playing at the collegiate level next year as a Division III recruit. Although the recruiting process became more difficult with the rise of COVID-19, Tacelli was able to find a school where he can play.

“The process was very different because of COVID-19, which didn’t help,” Tacelli said. “There were no camps to show my capabilities and not having a senior season at the beginning of the year hurts too because the senior film is very important in recruiting.”

Many schools across the country offer Division III football, but Rhodes was an easy decision for Tacelli because of its location.

“When I visited my sister in North Carolina, I really liked the south, and I wanted to go to a good academic school in the south,” Tacelli said.

Although COVID-19 moved the football season to later in the school year, Tacelli is still excited. The team has been preparing since the summer for this season and has high hopes.

“I am really excited for this upcoming football season because I have worked really hard for it and been waiting for a long time,” Tacelli said. “One last ride with my guys all the way from second grade.”