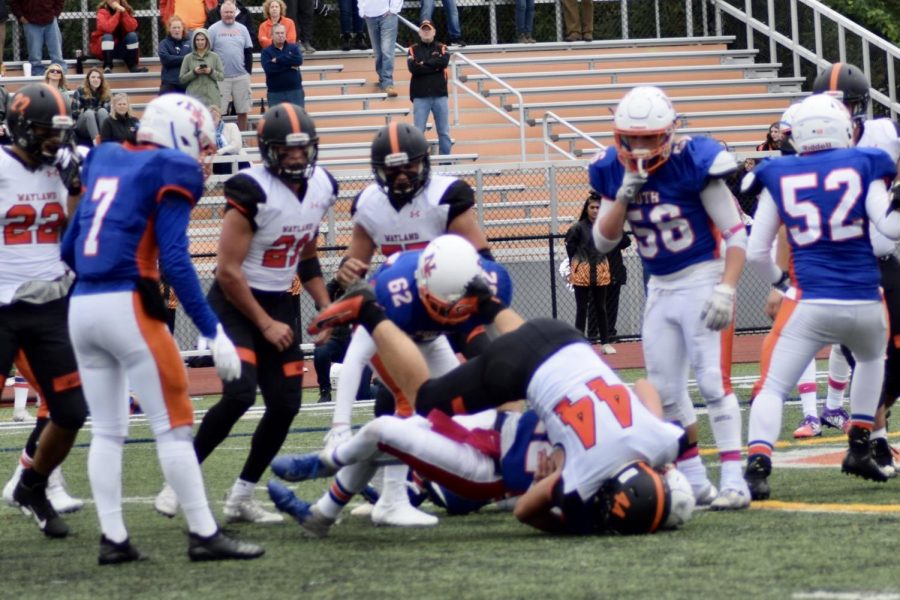 Senior varsity football captain Nick Dresens grapples for the ball with a member of an opposing team. This year, Dresens, along with the rest of the football team, have been made to wait for their opportunity to compete. “Everybody I've talked to on the team is extremely excited to get back out on the field,” Dresens said. “It's been over a year since any of us have been able to play meaningful football, and everybody is itching to get back out on the field.”

Recently, the Massachusetts Interscholastic Athletic Association (MIAA) confirmed that a football season would take place from Feb. 22 to Apr. 25. This announcement was delivered several months after the organization’s prior statement, which recommended that certain sports compete later in the year due to concerns for sustained contact among participants.

To take advantage of the additional off-season time, the WHS football program has been training relentlessly in preparation for the postponed season.

“We were able to get in 15 practices this fall to [learn] plays and work on our conditioning,” varsity football head coach Scott Parseghian said. “We also have been working out in our fitness room four days a week to get ready for the season starting on Feb. 22.”

However, preparing for the season wasn’t always easy. For senior football captain Nick Dresens, the largest challenge for the football team was the uncertainty of the situation. The program practiced for months, all the while unknowing if they would have the opportunity to play.

“The biggest challenge that we faced was the uncertainty of the season happening,” Dresens said. “Not knowing whether or not the season was going to take place was very challenging. It was certainly a relief when MIAA voted to allow the season to happen.”

Dresens’ sentiment concerning the lack of certainty around the season was a shared one.

“The main challenge we’ve faced because of the delay due to the coronavirus has been the chance that there wouldn’t be a season,” sophomore Connor Sheehan said. “Up until a few weeks ago, the MIAA hadn’t officially approved our season, and I know a lot of people were skeptical that the season would still be on, especially with the recent surges in COVID-19 cases.”

That’s not to say that the season being pushed back didn’t have its benefits, according to the football team. With extra pre-season time on their hands, the football program was able to schedule various workouts and exercise sessions to gain an edge over their future opponents.

“Having more time to focus on getting better has been beneficial,” Dresens said. “Also, we were able to have non-contact practices during the fall, which has put us ahead of many other teams who have not been able to have practices like these yet.”

Parseghian concurred regarding the team’s ability to maximize the extra pre-season time.

“We have had an eight month off-season program that most of our athletes have taken seriously and [are now] ready for the season,” Parseghian said.

Some players also benefited from the extra time before the season and were able to improve multiple areas of their game.

“In the fall, we were able to focus heavily on working on our skills as well as learning plays,” Sheehan said. “In past years, each week was focused on building up until the next game, whereas our whole fall this year was structured around knowing we had time to get better and using that time well. There was more time for reps and pure genuine practice. In addition to that, we had the entire winter to get ready for the season in the weight room.”

Although they’ve been forced to endure an extremely long wait in the build-up to their 2020-2021 season, the football team is eager to compete again.

“I’m super excited to play and see how the season turns out, however it ends up looking,” Sheehan said.