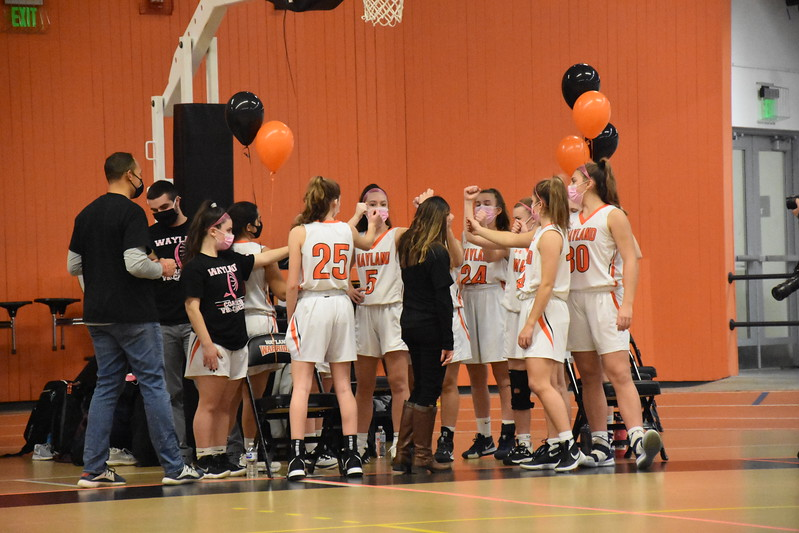 Girls varsity basketball head coach Amanda Rukstalis prepares to end a huddle before the Warrior's game against Boston Latin on Feb. 5th. The Warriors were unsuccessful in their attempt to beat the Wolfpack, but the impact of the game - a Coaches vs. Cancer event - extended far beyond the team's record. "It is about raising money for the American Cancer Society through the Coaches vs. Cancer program," Rukstalis said. "We have been doing it for eight years now and each year [the team] has the initials 'JG' on their sleeves in memory of Jim Griffin, former Wayland High School guidance counselor and freshman girls basketball coach."

On Friday, Feb. 5th, the WHS girls varsity basketball team took on the Boston Latin Wolfpack in a fierce, back-and-forth defensive tussle. The Warriors came up just short, losing by a score of 41-36. However, the match itself was only a small part of the far larger, more important struggle that the team engaged in that night – the battle against cancer.

For the last eight years, the Wayland girls varsity basketball team has organized a Coaches vs. Cancer event, which raises money for those affected by cancer.

“It is a regular league game, [the game] counts towards our record and final standings, but we wear our Coaches vs. Cancer t-shirts in warm-ups and dedicate the game to someone who is fighting cancer or losing their battle to cancer,” girls varsity basketball coach Amanda Rukstalis said.

The Coaches vs. Cancer event was first held during the 2013-14 season in honor of Jim Griffin, a former WHS guidance counselor and girls basketball coach who passed away from pancreatic cancer. Nearly a decade later, honoring Griffin’s legacy is still a large part of why the event is cherished.

“The reason that we play in this Coaches vs. Cancer game and the reason why this event has always been so special is because we all play in memory of Jim Griffin,” sophomore girls basketball player Morgan Warner said. “He was a girls basketball coach here, and he passed away of cancer. This game is something that means a lot to all of us, and the game is bigger than just basketball.”

In past years, one of the primary sources of fundraising for the event has been the funds generated from spectators’ ticket sales. However, after the MIAA deemed that spectators would not be allowed to watch basketball games in-person this season due to concerns regarding COVID-19, many worried about the event’s ability to collect a considerable amount of money.

“Unfortunately, COVID-19 greatly impacted this event because we [couldn’t] have any fans at our games,” Rukstalis said. “With no fans, that meant no ticket sales and no concession stand profits to donate. We solely relied on our donation page and the sale of the Coaches vs. Cancer shirts online.”

The fans weren’t just sources of fundraising, though. Previously, spectators were able to cheer on the players in the game, reminding the players that they have support.

“In a usual year, my favorite part of the game is all the fans who attend,” senior girls basketball captain Abby Gavron said. “Coaches vs. Cancer is usually the game with the most fans, and the field house is always packed.”

Despite the gap left by the lack of ticket and concession profits, the Wayland community intended to match, if not surpass, previous fundraising efforts.

“My favorite part of this event is seeing really the entire town come together to make this a special night for everyone,” Warner said. “Many families in Wayland, including many families outside of the basketball community, donate very generous amounts of money that we are then able to donate to finding a cure for cancer.”

Ultimately, this year’s fundraiser was a success in the eyes of the team.

“This year, we have raised $4,450 between our donation page and t-shirt sales,” Rukstalis said. “It is incredible how many families and community members generously donated this year.”