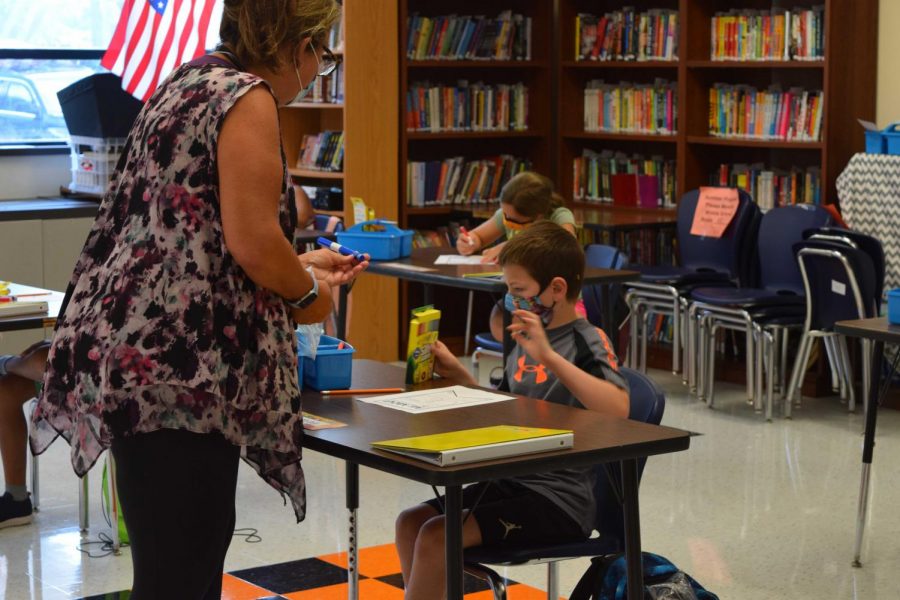 An elementary teacher assists a student with his work. The School Committee voted almost unanimously for elementary students to return to school all in person, five days a week starting April 5.

The Wayland Public Schools School Committee voted to move all three elementary schools to all in-person learning, five days a week, starting the week of April 5.

The vote came after a presentation and Q&A from Joseph Allen of the Harvard Chan School of Public Health. Allen is a public health expert and director of Harvard’s Healthy Building Program.

Allen said that three feet of social distancing, along with correctly fitted and properly thick masks would be safe for students.

Allen also emphasized the importance of air ventilation in classrooms, noting that “as the weather turns,” kids will be able to spend more time outdoors and classrooms can keep windows open.

School Committee members relayed questions from community members in attendance to Allen in addition to their own questions.

One parent of first and fifth grader said in a read aloud written response said that there “was not a day in [their] house without screaming, crying or slamming doors…”

In general, School Committee members echoed parents’ and students’ concerns and leaned toward getting students back in classrooms five days a week. Governor Baker proposed a mandate for all elementary schools to be all in-person five days a week starting April 5. The plan indicates that middle schools could phase into the all in-person model and the Massachusetts Board of Elementary and Secondary Education will vote on this on Friday.

Assistant superintendent Perry Graham gave the School Community a presentation on high school students’ mental and emotional health. Included was data on students’ grades, which student groups are at risk to underperform in the hybrid model and student and teacher feedback.

The School Committed decided to postpone the vote about whether to send middle and high school students to the all in person model until next week.

Unobskey said it’s likely that the middle and high school will return to the all-in model after the week of April 5th. He said staggering each school’s return in a “phased in” plan will ease the logistical processes needed to return to all-in, including traffic and arrival and dismissal considerations.