Restaurant Reviews: The real scoop on the takeout from 110 Grill 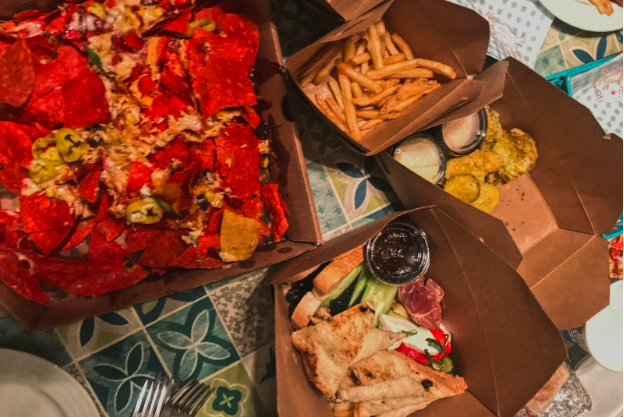 Wayland’s 110 Grill offers takeout and dine in. WSPN’s Sophia Oppenheim shares her and her family's insights on some of the takeout menu items.

Wayland’s 110 Grill is open seven days a week serving American food tailored to any customer. When taking your order at the 110 Grill, hostesses are always attentive and want to be cautious that you receive exactly what you ordered. My family and I decided to order 110 Grill for takeout. Even though my family and I have only been to 110 Grill a couple of times, we are always pleasantly surprised by the new menu items we try. Our family unknowingly received a few extra food items, but this allows for more opinions to be shared on the menu!

BBQ chicken nachos: We first tried the BBQ nachos. This is definitely not something my family usually gets because we are not a big barbecue sauce family. The nachos arrived in a small pizza box, much larger than expected. We found the nachos to be sweet, providing a unique twist on the typical style. Yellow peppers, corn, chicken, black beans, cheese and chives accompanied vibrant red tortilla chips. I thought the yellow peppers added a really unexpected and delicious taste. Overall, I would give the nachos a six out of 10.

Fried pickles: Personally I am not a huge fan of fried pickles, however, these fried pickles were great. The pickles arrived with two different sauces, one was a honey mustard sauce and the other a sriracha aioli. I felt the restaurant fried the pickles nicely, not overdoing the fried coating to make them light but crunchy. Overall, I would rate these a seven out of 10.

The antipasto: The antipasto came in two different containers, one holding the ciabatta bread and jam and the other with the meats and cheeses. The antipasto’s ingredients came looking and tasting fresh. There were even blueberries added to the mix which I thought added an unexpected flavoring. A large variety of meats, cheeses and sides arrived with the plate. However, I was not overwhelmed with any great flavors. I would give the antipasto a six out of 10.

The steak and cheese: My dad ended up having the steak and cheese for his meal. He found the food cooked just right and labelled it as one of the best things he’s tried at the 110 Grill. The sub came with onions, peppers and plenty of melted cheese. Overall, he rated it a nine out of 10.

The Brussels sprouts and shrimp: This meal came together, but it’s unclear if they were meant to be paired since it was not part of our original order. The Brussels sprouts arrived well cooked and soft. I would give them a six out of 10. They paired well with the shrimp even to me, someone who doesn’t love shrimp. Because of the travel, we weren’t sure if it was meant to be warm or room temperature. However, the shrimp was good and tender and had a good lemon flavor. I would give the shrimp a seven out of 10.

Bread & butter: This was the last item on the menu we tried. The bread was a homemade artisan bread which was great. The bread that paired with the butter was the best part. The butter was whipped, and it had a really strong flavor of garlic. Overall, I would give this a nine out of 10.

Crista (mom): Her overall rating was a six out of 10. She really enjoyed the bread but was not pleased by the sweet nachos and thought the pickles could have had a stronger taste.

Grace (little sister): Her overall rating was a seven out of 10. She really enjoyed the pickles and antipasto. Again, the sweet nachos were not a favorite by the family. Grace was also not impressed by the sauces accompanied by the fried pickles. She felt the honey mustard pairing with the pickles was too abstract with the sweet and savory combo.

Andrew (dad): His overall rating was an eight out of 10. He enjoyed everything but especially enjoyed the steak and cheese sub.