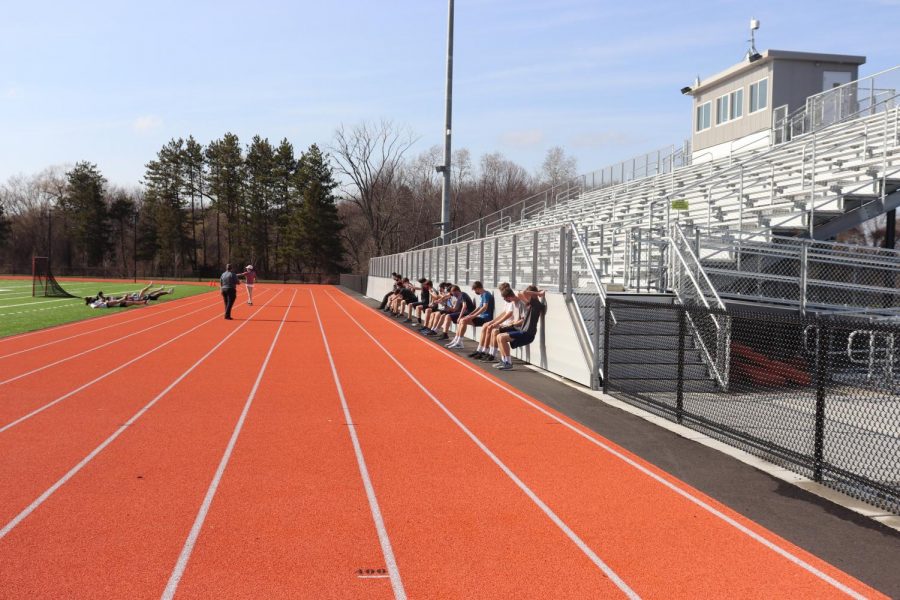 WHS track athletes exercise in front of the newly renovated home stands. The bleachers, which have served as a vantage point for family members to watch athletes compete, have also housed unauthorized spectators. "We will allow two parents or household siblings as spectators for every participating player," athletic director Heath Rollins said. "The governor has increased the maximum number of spectators allowed at outdoor venues, which has caused a little confusion with the general public."

As a result of social distancing requirements imposed due to the onset of the COVID-19 pandemic, WHS has been unable to allow significant numbers of spectators to attend sporting events for the last seven months. To be specific, athletes of certain sports, such as soccer and field hockey, have only been permitted to invite two immediate family members to each game. However, many have recently watched home football games in-person despite not being invited by a player. This has raised safety concerns amidst the ongoing fight against COVID-19, as well as confusion as to whether the rules regarding fans being present at games have changed.

One of the foremost reasons why rules concerning spectators at outdoor sporting events have stayed the same is the difficulty in bringing about agreement between the various parties involved in planning out games and matches.

Another one of the challenges involved in allowing more fans to participate in athletic competitions is preserving basic social distancing requirements between fans when at the games.

“If we allow students into games, we need to provide direct supervision for masks, 6-foot spacing and be able to contact trace in the event someone tests positive,” Rollins said. “We have found it difficult for students to follow the spacing requirements in this environment.”

Although the vast majority of students have not been permitted to attend games, many have taken to doing so anyway. Student A, a sophomore at WHS who wishes to stay anonymous, went to at least one football match without authorization. However, Student A cited the fact that they had not been informed of the rules regarding spectators.

“I wasn’t aware that the rules were in place,” Student A said. “I had heard that the week before students had come to the previous game.”

Other students felt the same way, adding that they had been informed that students were allowed to attend events.

“I don’t really think that anyone knew about the rules since everyone was told [that student fans were being allowed again in a limited capacity],” Student B, a junior at WHS who wishes to remain anonymous, said. “We all knew that there was a limit to the number of student fans but were never explicitly told that we couldn’t be there in the first place.”

After being informed of the actual regulations, students differed in opinion on whether they would attempt to watch games in the near future. Some, such as Student B, felt that students had taken ample safety precautions to stay protected from the transmission of the COVID-19 virus.

“I think I would [go to another game] since even at the game, we weren’t kicked out,” Student B said. “I was working with myself and other student fans to find safe, socially distanced spaces to watch the game.”

That being said, some fans noted that they wouldn’t have watched a live game had they known about the regulatory guidelines.

“I would not [have attended the game] because the rules are implemented for a reason,” Student A said. “However, I believe that it was safe because everyone was wearing a mask and socially distant.”

Despite the lack of certainty that has surrounded this athletic year, one thing is for sure. Fans have, and will continue to play a prominent role in WHS sporting events – after regulations are eased that is.

“As we move forward this year, students will have more opportunities to watch the teams play,” Rollins said. “We want to be able to get ‘back to normal’ with students at games as soon as we can safely do so.”