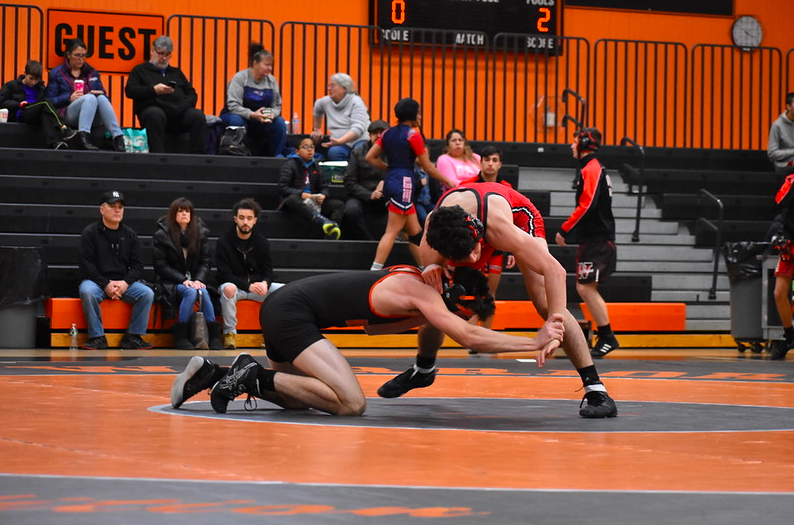 With the wrestling season canceled due to COVID-19, wrestlers reflect on their feelings regarding the decision. Many will miss the season and all its components. “I will miss the team and the group of guys that I hung out with after tournaments and dual meets," junior Finn O'Driscoll said.

During a year without COVID-19, the wrestling season for WHS would be well over. This year, however, the entire season itself has been up in the air for quite some time. It was first pushed back until the spring because cases were very high in the winter, but ultimately the DCL canceled the season. It was just recently announced that the season would not be happening due to COVID-19.

Many of the players, who also play football, were at a football team dinner when they found out. They received an email from Wrestling Coach Sean Chase, who announced Wayland would not be offering wrestling this year.

It didn’t come as a surprise for many since wrestling is such a close-contact sport; however, the decision took quite a while to become official.

“I had a feeling in the back of my mind that it wasn’t going to happen,” junior Finn O’Driscoll said. “I had heard about how the group of people deciding whether it would happen kept delaying the process and not coming up with a decision.”

With the pandemic, wrestling is nearly impossible. With so much contact, social distancing is not practical.

“It’s such a contact sport, so there is so much touching,” senior captain Matt Morris said. “You are all over each other basically the whole match, and it would be pretty much impossible to wear a mask while wrestling with the headgear and everything.”

There are ways for wrestlers to social distance and wear masks but this would completely change the way athletes play the sport.

“Even though we can use masks, the chances of the masks staying on our faces while wrestling is low,” Bolivar said.

Although O’Driscoll believes the season could have happened if everyone did as they were supposed to, he knows that would’ve been difficult.

“I think it could have happened, but everything would have to go perfectly and cooperation from every kid in every town would be necessary,” O’Driscoll said. “[That cooperation] seems highly unlikely.”

Wrestling is an individual sport that allows players to compete on their own, which is rewarding to many when they win. This feeling is something that many will miss without the season.

“Winning is the best feeling ever, especially when you know it’s all because of you,” Morris said.

Without the season, O’Driscoll explains how much he will miss the team itself. There is lots of team bonding that goes on in the sport.

“I will miss the team and the group of guys that I hung out with after tournaments and dual meets,” O’Driscoll said. “The team is a great group of guys, and it was going to be a really fun year.”