Athlete of the Month: Nick Dresens 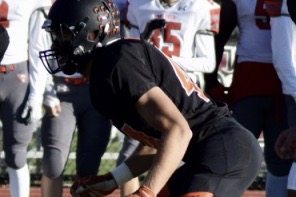 Senior football captain Nick Dresens readies himself for his opponents' next play. For the past three years, Dresens has been a largely unstoppable defensive force for the Warriors. "I see my greatest strength as being well-rounded," Dresens said. "I’m able to defend in the run game as well as drop back into pass coverage and cover receivers and running backs."

WHS senior Nick Dresens, a three-year varsity football player, has established himself as one of the best players for the Wayland Warriors, as well as in the entirety of the DCL. After his graduation later in May, Dresens will continue his football career at Tufts University.

Dresens began playing football in 6th grade, which is a relatively late age to start one’s career. He credited the sport’s enjoyment as a dominant factor in his choosing to embark on an athletic journey of several years.

“Out of all the sports I had played [growing up], I simply had the best time playing football,” Dresens said.

One interesting aspect of Dresens’ football journey is that he has never opted to play for any “club” teams as he grew up. Instead, he elected to workout and train individually.

“I have never played for any club football teams,” Dresens said. “I put the time into the weight room with workouts and spent a lot of time on the field training as well.”

Dresens first made the Wayland Warriors varsity squad as a sophomore. The following year, he had his breakout season, transitioning from rarely playing to earning accolades at the season’s end.

“I began starting on varsity during my junior year, but I [also] played in a limited fashion sophomore year,” Dresens said. “After my junior year, I earned defensive player of the year for our team, as well as a DCL All-Star spot.”

Due to his large contributions to the Warriors highly successful run during their 2021 season, Dresens further established himself as one of the premier players in the DCL.

“After my senior year, I was named defensive player of the year for the DCL Small as well as a DCL All Star,” Dresens said.

Dresens’ lightning-quick transition from a bench player to key starter on the WHS team directly coincided with his shift in position. He attributed his increase in impact to his position change.

“When I switched from defensive end to linebacker following my sophomore year, that’s when I felt as if my play really elevated,” Dresens said. “I found a lot more success at linebacker than defensive end.”

In fact, Dresens is very proud of his successful position change.

“I see my biggest accomplishment as switching positions, and then being recruited to play in college for that new position,” Dresens said.

As a result of his valiant efforts for the WHS team, Dresens attracted vast amounts of attention from college scouts.

“My recruiting process [consisted of] a lot of phone calls, text messages, and emails,” Dresens said. “There was one camp I was able to go to over the summer, which took place in Connecticut.”

Eventually, Dresens made the decision to attend Tufts University as a member of their class of 2025. He will soon join multiple of his family members in becoming a Jumbo — Dresens’ older brother, Zach, is currently a member of the mens soccer team at Tufts, and his father, Paul, played football there as well.

“I am planning on playing linebacker for four years at Tufts University,” Dresens said.

Numerous reasons contributed to Dresens’ commitment to Tufts, including the strengths of their academic and athletic programs.

“I had visited Tufts a number of times before, and I really liked the campus, as well as their football program,” Dresens said. “Along with having top-notch academics, Tufts was a clear first choice.”

Although much of Dresens’ future is uncertain, there’s no question that he will continue to do what he does best — torment unfortunate opposing players with monster tackles.

“I love delivering big hits and making tackles more than anything else,” Dresens said. “There’s no other sport like football in that regard.”