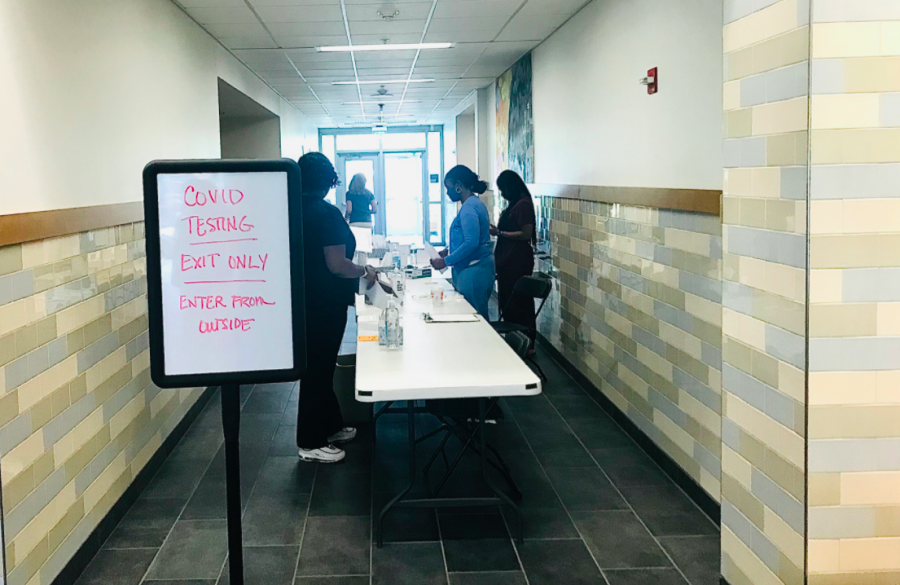 Pool testing centers have been set up in two school hallways as a new COVID-19 preventative. It is now mandatory for students participating in extracurricular activities to get tested. “It checks weekly to make sure people aren't sick, and [students] could catch an asymptomatic case which might not be noticed otherwise,” sophomore Patricia Pak said.

As spring sports and clubs begin for Wayland High School students, Wayland has implemented a new system in hopes of stopping the spread of COVID-19. This system is called “pool testing,” and it is now mandatory for all students who wish to participate in an extracurricular activity to partake in the testing.

Five swabs from five students are placed in a tube tested at the same time at designated stations, and if a test pool comes back positive, those five students are tested again. This seems like a logical approach to speed up the testing process, but its effectiveness and purpose have been debated across the student body.

“I think pool testing is a good idea for students because it’s pretty painless as it’s not that difficult to participate in,” sophomore Ann Tom said. “I don’t think there are harms from participating in the program to begin with, but the benefits of knowing if you’re in a positive pool or not is very helpful. It’s a good method to know personally if you are infected, and it’s not cumbersome at all so there’s no reason not to do it.”

Other students appreciate the safety features and thoroughness that this precautionary pool testing provides.

“It checks weekly to make sure people aren’t sick, and [students] could catch an asymptomatic case which might not be noticed otherwise,” sophomore Patricia Pak said.

It’s important that Wayland students remain safe while together in the all-in learning model, and some students feel that pool testing is one of the best ways to keep COVID-19 cases at a minimum.

“I think that pool testing is a very good idea for students,” freshman Adam Lange said. “It helps provide us with valuable info for contact tracing which could potentially stop a massive spike from occurring.”

The purpose of pool testing has a lot to do with easing the worry that students can have with participating in extracurricular activities during the pandemic.

“It feels good to know every week that I am negative,” freshman Amy McCormack said. “It is a simple thing to do to get peace of mind.”

However, this testing system is not without its flaws. With the majority of students vying for a spot in line on the same day, students find that it can be hectic.

“The line is really long during lunch,” McCormack said. “It might be better to set up times during lunch for different people to go in by alphabetical order or something or, since the line used to be shorter when the testing was happening in the morning, the time could be changed back to the staggered entry at drop off.”

Other students concur that more testing sites would make the testing process easier, but they still have faith that its benefits outweigh the negatives.

“I think it might be more helpful to know if you specifically tested positive or not,” Tom said. “But other than that, I don’t really have any criticisms of the current testing program. I think people take the pool testing program seriously. I feel like generally, the people participating in it know its importance and how useful it can be, regardless if they’re obligated to do it or not.”

Other students share the opinion that mandatory pool testing is a process that should be adjusted to increase its effectiveness by changing the “pools.”

“I think the way we are in a pool with random people who we have not been in contact with is really not ideal,” sophomore Ashley Rice said. “I wish they would test individually or have people pool with their friends or teammates.”

The concept of the random students being grouped for pool testing itself also is a controversial point amongst students.

“It’s helpful to know when someone tests positive, but it’s not helpful to quarantine when you’re in a pool with someone who you have not been in contact with who tested positive,” Rice said.

The amount of stress that COVID-19 testing brings some students has not been considered much since pool testing has been made mandatory for those with extracurricular activities.

“I don’t think it should be required, even for kids who do extracurriculars, because for some kids it causes a lot of anxiety and many people have Tomophobia, and it’s not worth it,” freshman Amelia Furlong said.

Those who participate in activities outside of school that don’t require testing may bring in positive cases that are going unnoticed. The idea of testing each student has been suggested to prevent this.

“I think that pooled testing should be required [for all students],” Lange said.