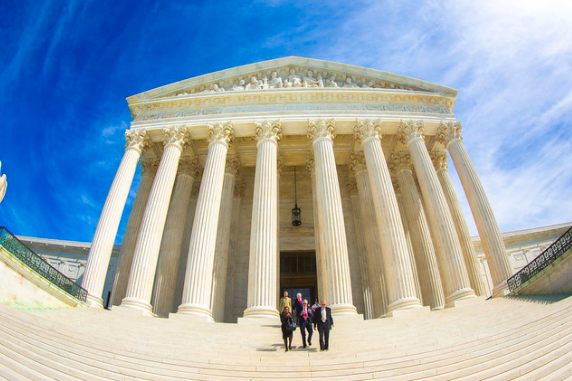 The Supreme Court building in Washington, D.C.. Later this year, the nine justices of the Supreme Court will weigh in on a case concerning the limits of student expression when off-campus. "I do not believe a school should have the ability to limit student speech off-campus," Student B, who wanted to remain anonymous, said. "Students are expected to maintain high standards in school, and I believe it to be unrealistic to expect these standards to be extended to every facet of a student's life."

The United States Supreme Court is set to decide a ground-breaking lawsuit, entitled Mahanoy Area School District v. B.L. The suit, which questions the power of the First Amendment concerning student expression away from public school campuses, is expected to set a new precedent for online, off-campus student speech. Should the district find success in its attempt to reverse prior rulings on the case, students across the country will be forced to further stifle their views to avoid negative repercussions.

The initial issue occurred in early 2017, when Brandi Levy, a then-sophomore at Mahanoy Area High School in Pennsylvania, posted a profane mess.

She posted on her Snapchat account while not at school. The post contained numerous expletives in reference to her school’s varsity cheerleading team, which Levy had failed to become a member of. After someone viewed Levy’s post, which was deemed inappropriate and in violation of school rules, they notified her cheerleading coach, and school officials suspended Levy from the cheerleading program for one year.

Levy, along with her parents, filed a lawsuit against the Mahanoy Area School District, claiming that the district infringed on her constitutional rights. She argued that her speech was not disruptive to her school environment and was thus protected by the First Amendment. The district maintained it was under their jurisdiction to respond to the student’s post, a view that lower courts did not share.

The case promises to expand upon the ruling given by the Court during their 1969 Tinker vs. Des Moines decision, in which justices announced that students did not “shed their constitutional rights at the schoolhouse gate.” Over fifty years later, the debate over whether or not students should be forced to forfeit First Amendment rights beyond the schoolhouse gates has sparked conversation amongst members of the WHS community and beyond.

An opinion shared by numerous students was that the school’s jurisdiction regarding student speech should end once students are no longer physically present on campus.

“I don’t think that the schools should have the ability to limit student speech off campus because the purpose of school is for learning and education,” Student A, who wished to remain anonymous, said. “There is no need for the school to be watching out for students outside of school and keeping track of their speech.”

Others thought that schools would be rash to attempt to regulate student conduct in off-campus environments.

“In my opinion, a school should be concerned with what happens at school,” Student B, who also wished to maintain anonymity, said. “But, it is not the place of a school to police the conduct of students outside of campus. Personal lives and school lives are distinct and entirely separate, so blending the two is a mistake.”

Sophomore Jacob Crawford concurred, further noting his belief that parents and guardians are the sole persons who should be able to restrict youth speech away from school campuses.

The sentiment that people should expect to be held to distinct standards in different locations was a shared one.

“Something inappropriate in school may be entirely acceptable elsewhere,” Student B said. “[How do we know] what standards will be enforced on students both in and outside of school?”

One of the more interesting aspects of Levy’s situation was that her incident occurred as a result of her actions on a social media platform. The idea that one’s arguably harmless social media use could be scrutinized and condemned by schools was a cause of concern for many.

“[If the Mahanoy District wins], students may be unfairly punished for seemingly insignificant remarks or actions off-campus, especially those on social media,” Student B said. “What is a punishable offense is an arbitrary system, as most everyone has done or said something out of school that wouldn’t be acceptable within a school. Are students to censor themselves at all times, lest they upset the school?”

However, while a majority of students empathized entirely with Levy, some did mention that a ruling in her favor might reduce the ability of schools to regulate offensive or harmful actions, such as certain types of harassment and bullying.

“It’s obvious that the decision will be very consequential for students,” sophomore Prash Subbiah said. “If the Supreme Court sides with the student, then we at WHS will no longer have to consider in-school repercussions for the things we say outside of school. On the other hand, such a ruling might reduce the coercive power the school has to fight things like cyberbullying.”

Subbiah did note his skepticism as to whether or not Levy’s actions were harsh enough to warrant punishment, but he maintained that schools being able to protect individuals from harassment was necessary.

“While I do think that deriding your coaches on Snap [Snapchat] is in poor taste, it doesn’t rise to the level of substantively impacting what happens in school for me,” Subbiah said. “[That being said], they should absolutely be able to prevent students from bullying and harassing each other because that will impact things like academic performance in a notable way.”

Ultimately, though, most students felt unsettled by the questioning of their Constitutional rights.

“Should schools be allowed to punish students for behavior off-campus?” Student B said. “And if that’s the case, where does the line stop?”