Serena Field: “Creating my own school taught me that kids can love academics.” 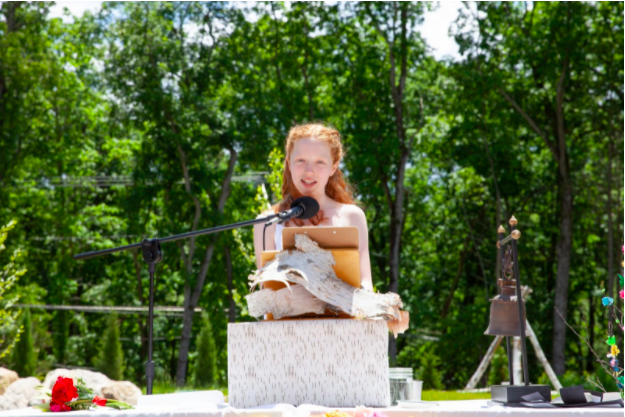 Sophomore Serena Field gives a speech to her fellow students at her eighth-grade graduation ceremony. "We were constantly forced to look at our relationships with each other and hold each other accountable," Field said.

As a child, sophomore Serena Field had a love for learning and the outdoors. With the help of her parents and a few other families, Field was able to channel these interests through creating an alternative-learning school in Lincoln called “Birches School.” The founders established the school in 2012 and Field herself attended it from third to eighth grade.

Field is currently attending WHS, but previously attended Birches School for most of her academic career. Since the Birches School ends at eighth grade, she switched to public school her freshman year of high school. Field’s role in Birches School was initially as a student, but as the years progressed, Field began to teach her own classes. She created a few curriculums and taught them to other students, including one about East Asian studies.

The academics at Birches School are unconventional compared to public school—instead of following a typical curriculum, Birches School focuses on incorporating aspects of nature into their academics.

Birches School has gained popularity over time; however, the school’s beginnings were humble.

“We started in a one-room schoolhouse; we rented a room from a church in Lincoln,” Field said. “It was founded as going from Kindergarten to third grade and with each year that I went [to the school], we went up a year until we were a K-8 school.”

Birches School started out of a frustration with public schools. The founding families wanted a more student-led curriculum than what was offered at Lincoln Public Schools, where Field attended.

“Kindergarten through first grade I went to Lincoln Public Schools and it didn’t work, so my parents started looking for other options for schools,” Field said. “We found two other kids who were feeling equally annoyed at the Lincoln school system, and together, the three parents and kids decided to see if we could find a teacher, a principal and a building.”

Birches focuses on students’ passion for learning and largely lets them dictate their education. Students are free to study what interests them rather than what the school wants them to learn.

“My class [included] one other person, so it was very free-for-all. All classes could be done outside and students had the choice to replace an academic block with a nature hike,” Field said. “People were so interested in all their academics that it never went out of balance.”

This education style is unconventional, but beneficial for student’s mental and emotional health according to Field. The small student population also allowed for a tight-knight community in which to grow relationships.

“We were constantly forced to look at our relationships with each other and hold each other accountable.” Field said.

Although the school is currently successful with a large number of students, the steps towards this accomplishment weren’t easy. Field acknowledges the risks it took to establish the school and the initial difficulties in creating a new curriculum.

“It could have been a total failure,” Field said. “Not that many people wanted to risk putting their kids in this really weird-sounding school that might go out of business in a year. Not many teachers wanted to move from stable jobs to go teach there.”

Rather than following the approach of a traditional school in regards to grading, the Birches School used a different technique to account for student’s achievements: a thorough report of the students’ progress throughout the year replaced the conventional grading system, a method that drastically sets the school apart from others.

“My school didn’t have grades,” Field said. “Instead, once a year the teachers would write six pages—two pages on how [the students] do socially, two pages on emotional growth, and two pages on academics. The progress reports for each kid would be an inch thick. It was way more attentive on student’s progress.”

One of the biggest differences between the school systems that Field noticed was the students’ attitudes towards learning. As a current Wayland High School student, she is cautiously hopeful for the future of public schools.

“I see steps somewhat into trying to make education more student-led, but they’re very small steps,” Field said. “The amount of kids that hate school is still so large, I don’t think there’s enough. I saw at that school it’s possible for students to love academics,” Field said.