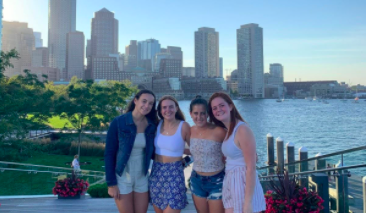 College freshman Kayla Poulsen and her friends visit Boston on a weekend night out. Because their college Northeastern University is so close to the city, it allowed for fun getaways on the waterfront. "When I moved on to campus in September, it had been about five months since lockdown started, so I mostly remember feeling excited to get out of my house and explore a new environment," Poulsen said. "Being in the heart of Boston is perfect for visiting restaurants, museums, clothing stores and so much more."

After a devastating senior year, college freshmen have endured the effects of COVID-19 at school. This was a new experience for everyone, full of positives and negatives.

Before the start of the semester, many were unsure what college would look like. There was worry that officials would shut schools down and COVID-19 would affect the social lives of students. However, Kayla Poulsen, a freshman at Northeastern University, was just happy to experience something new.

“It was weird,” Poulsen said. “When I moved on to campus in September, it had been about five months since lockdown started, so I mostly remember feeling excited to get out of my house and explore a new environment.”

Colleges created many rules regarding social distancing that made it hard to socialize with a lot of kids. With rules about the number of people in your dorm, no parties and some classes online, making friends was something that seemed like it was going to be difficult.

“COVID-19 rules were pretty strict at Northeastern,” Poulsen said. “Throughout the whole year, students were tested every three days and masks were worn at pretty much all times. Initially, we weren’t allowed any guests in our dorm rooms, but eventually, they allowed one guest from our residence hall, and then mid-spring, they allowed one guest from any residence hall.”

These new rules made it difficult for students to attend classes all in person. Many professors used Zoom or a hybrid model to meet with their students throughout the year.

“My classes were hybrid, so you could either be in-person or remote,” Poulsen said. “Most of my professors would only come to campus once or twice a week, so I usually would go into the classroom when they were there and do class remotely when they were teaching from home.”

Although students worldwide faced new ways of learning virtually or hybrid, most still created some connections with their professors. It was more of a challenge this year due to the restrictions, but it wasn’t impossible.

“There was only one professor that I developed a strong connection with,” Poulsen said. “Most of my professors were teaching completely remotely, and my classes were probably 80 students, so they had no idea who I was. The professor I got close to I had for both the fall and the spring semester, and he was in person the majority of the time, so I think that made the difference.”

At some schools like Maryland University, COVID-19 cases dropped throughout the year, creating an environment where students felt more comfortable. This is partly because students were eligible to receive the vaccine.

“With numbers dropping, I was able to feel safer at school and felt like I could be around more people, especially because I got the vaccine earlier than most students,” college freshman Jenna Ferrick said. “At times, I felt that we had a somewhat normal year. However, Covid was still very prominent, so I am unsure what a true ‘normal college experience’ is.”

For athletes, there was a whole other obstacle: risking the season. If kids went out and didn’t follow the rules, they could be putting their team at high risk. Kyle Mabe, a freshman soccer player at Bryant University, believed that going out was selfish.

“During the first semester, it wasn’t hard to make friends given we didn’t have a season, so we were able to go out and meet other people without potentially risking our season,” Mabe said. “On the other hand, the second semester was hard to meet new people because we had a season, and if we went out and met people, we ran the risk of getting [COVID-19] or placing ourselves in close contact.”

Not only was the college experience different, but being a student-athlete was a whole other experience. Seasons looked very different. COVID-19 and contact tracing impacted the ability to compete against other teams.

“Our very first game was supposed to be a preseason game against a non-conference team, University of Rhode Island, but there were complications with COVID-19 for both teams where we weren’t able to play,” Mabe said. “Our season only consisted of eight games in conference. We would play each team twice in a regular season, once away and once home, but given the circumstances, we only played each team once. At the end of the season, the top 2 teams would play for the finals, and the winner would be the champion of our league and get a spot in the NCAA tournament.”

After a year full of unknowns for students worldwide, students’ first year of college finished with lots of memories and experiences to reflect on.

“This was a unique year, and next year I am looking forward to living in an apartment with friends, being able to go to all in-person classes, and making more connections with my professors,” Ferrick said. “I am also excited to have the opportunity to participate in intramural sports.”