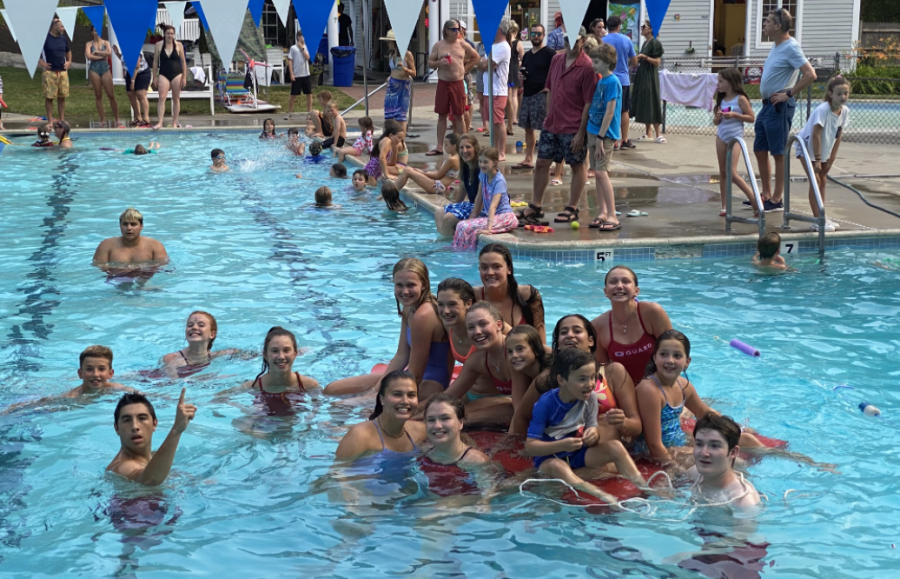 Wayland Swim and Tennis club lifeguards gather in the pool. Many WHS students started working this summer at many different places, including WSTC. "Working [at WSTC] just seemed fun and like a good job opportunity," sophomore Sophie Roman said.

As summer winds down, Wayland High School students’ summer jobs have come to an end. Many WHS students chose the working path this summer and worked at various places to spend their free time while doing something worthwhile.

Now that many WHS students are at the age where they can apply for various jobs, many are choosing to work. While being a student is quite taxing in itself, many students took on the role of a coach, lifeguard, caddie, counselor and many more positions during the months they were not in school.

Summer Adventure, a day camp at located at WHS, ran from Monday, June 21 to Friday, Aug. 6, with counselors watching up to 100 campers each day. To apply to be a counselor, students have to be at least 16 years old, and the application process includes a form and an in-person interview. When students return to work there each summer, their hourly wage rises.

Junior Piper Cinti worked as a counselor at Summer Adventure this past summer.

“I love kids, so I knew I wanted to be around them because it’s really fun, and I also just needed something to do this summer,”  Cinti said. “Ideally, since Summer Adventure ended, I will find another job at a restaurant or something. I also babysit for a lot of the kids that attended the camp now.”

“I was able to be a [swim] coach because I know my boss really well, [and] he is my high school swim coach,” Burke said. “I also swam for this program for a while, so I’m happy I can come back to it as a coach this time and teach kids as I was taught. It was super fun, [and] I was super grateful to allow kids to learn and teach them about a sport I love so much, while being paid for it.”

There are more than 40 guards part of the staff, ranging from rising high school sophomores to Wayland graduates. There are two to six guards on duty at once, and the guards are assigned shifts based on their availability to work. To apply to be a lifeguard, applicants must first take a generally week-long course to get certified. After the course, applicants take a test to officially become lifeguard and CPR certified.

WHS sophomore Sophie Roman received her certifications and then got interviewed by a WSTC manager.

“I thought lifeguarding would be a good idea for work, and I also wanted money and am a member at WSTC,” Roman said. “I haven’t been a member for that long, but it just seemed fun and kind of like an easy job opportunity.”

Another popular spot for students’ summer jobs are golf courses all around the MetroWest area. Many golf courses hired high schoolers, in and out of Wayland, to be golf caddies. At Weston Country Club, there are four to eight caddies working at once. The jobs of the caddies include carrying clubs for members, watching and locating players’ balls after they hit them and fixing any marks made on the course by players.

Junior Nikkie Kapadia took up the opportunity to apply to be a caddie at the Weston Country Club. The application process included emailing the caddie master and attending training sessions. After two training sessions, applicants are able to begin working.

“I chose to work at Weston Country Club because it is close to my house, and I can work whenever I want to since there is a lot of flexibility,” Kapadia said. “I also play golf, so I felt like it wouldn’t be very difficult to learn how to do the job properly.”

Ranging from golf courses to pool clubs, students found themselves in different places carrying out different lines of work all over the state. As summer comes to an end, some students will choose to focus on their studies. Others, however, will continue to work throughout the school year.

“I plan on working into the school year with a different job due to this job ending. I really enjoyed this job and hope to do it again next summer,” Burke said.