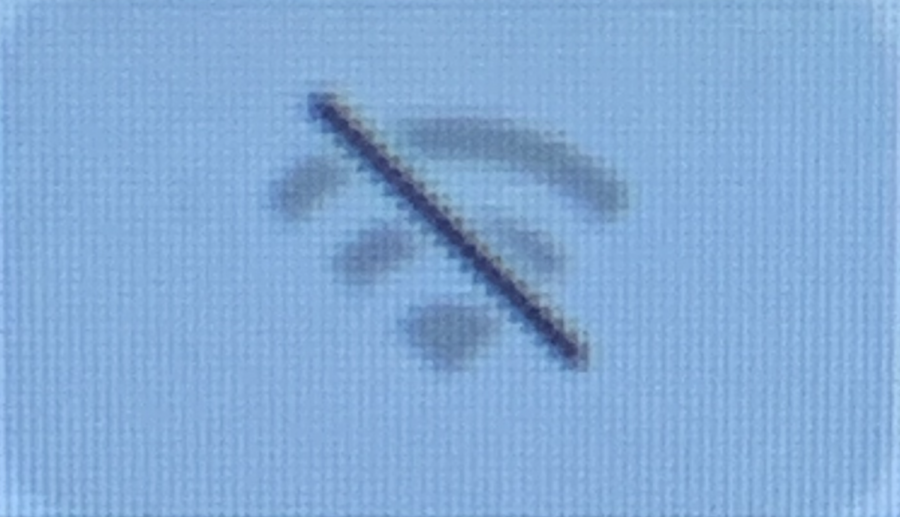 The “no WiFi” symbol shows up on a WHS provided MacBook when trying to gain connection. The issue hasn't been resolved yet.

Many members of Wayland High School have struggled to connect to the school WiFi since the beginning of the school year, causing many difficulties with learning in the classroom. After opening a laptop, a connection may take up to 10 minutes or be immediately gained. This has been happening for the entirety of the year, and has yet to be fixed.

This issue has impacted all of the students and faculty, but some more severely than others. Since attendance has moved online for teachers, this has created a delay with the start of class. Classes are only 55 minutes long compared to last year’s 80 minutes.

“[The WiFi being down] takes away from the first 15 minutes of every class I have,” junior Julia Mente said. “It’s really frustrating to me because it’s the fourth week of school.”

Students have noticed that their WiFi connection depends on the location of their classroom. Sophomore Ciaran Murphy has found that there may be a pattern to the level of connection he receives based on where he is in the school.

“When I study in the library, I connect instantly, but I’ve had a few issues on the far sides of the school, like the English and history wings,” Murphy said.

The WiFi issue is not only affecting the efficiency of the MacBooks, but also student’s cell phones. Unable to connect to cell service at school, most students rely on WiFi to contact friends and family in case of an emergency.

“It is impossible to contact other people because text messages don’t go through, and phone calls are always glitchy. It makes it so hard to navigate rides for sports practices during school,” sophomore Kyra Spooner said.

However, tech specialists have been experimenting daily with different parts of the network, hoping to find the main cause of the issue.

“We went down to one DHCP server, we stopped logging for a period of time, we removed the guest network and we took the controller and moved it back to the backup controller,” Simon said.

But teachers and students are still trying to find ways to adapt. This could involve methods such as switching to a technology free start of the lesson.

“There is a lot of frustration because teachers are at the mercy of the WiFi for a lot of their lesson plans, and we have to learn in a more old-school fashion for some classes,” Murphy said.

As the issue persists, there are certain steps students and staff can take to increase their chance of connectivity.

“One of the things that is really important is that we make sure students are not using hotspots in school, which is against the Acceptable Use Policy and can interfere with the network,” Simon said. “We also need to make sure students are not gaming, because we know that that is happening on occasion, and that takes up a bandwidth [which] can cause issues within the network.”

Simon, along with others from WHS, are still working hard to try and fix the WiFi problem that is present. Tuesday, Oct. 5, a list of hotspots that could potentially be interfering with the WiFi was sent to students in hopes that asking students to turn them off would help the network’s problem.

“We’re peeling back the layers to figure out what the problem is,” Simon said. “[We’re] hoping that we can figure it out, and [the issue] can be resolved.”