Athlete of the Month: Adam Goodfellow 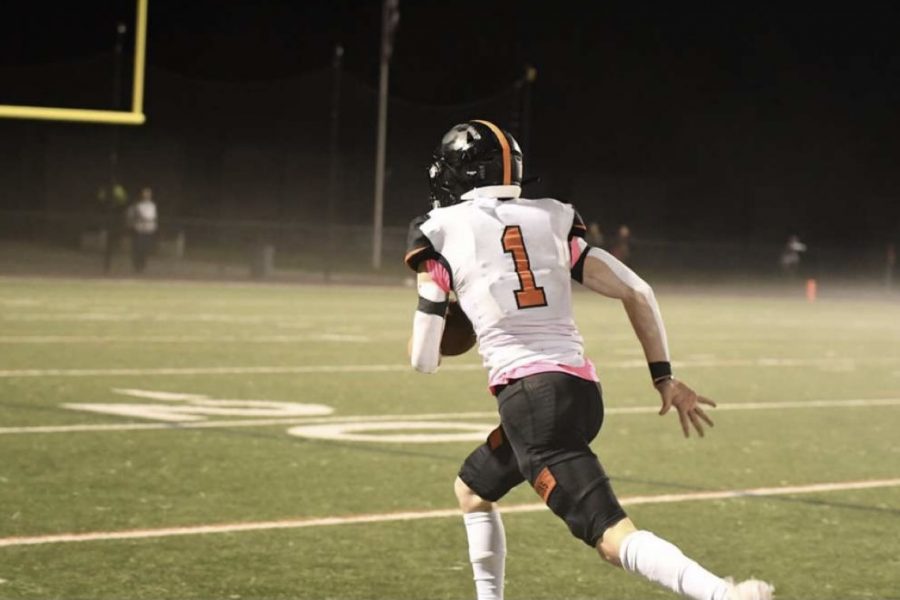 Senior captain Adam Goodfellow celebrates as he scores a touchdown in the Warriors' game against Newton South. Goodfellow went on to score five touchdowns in the 39-6 win. "Everything went just as planned and everyone showed up to play," Goodfellow said.

The Wayland football team, now 4-4, is just coming off of a loss in its senior night game against the Westford Academy Grey Ghosts. Parents, coaches and spectators honored the seniors on the team for their commitment to the program through the years. A particular senior who is leading the team is quarterback and free safety Adam Goodfellow.

As a senior captain, Goodfellow has loved the game of football for as long as he can remember. Starting at the age of two, football has been a part of his life ever since.

“I started when I was extremely young because my dad is a huge football fan,” Goodfellow said. “He signed my brother and I up.”

Goodfellow has always strived to be the most successful athlete he can be. Goodfellow has put countless hours in working on his game, particularly his speed, which has been a huge advantage.

“During the season I play about twice a week, while out of season I try to play every day,” Goodfellow said. “I play with my brother [senior] Sean [Goodfellow] and [senior] teammates Will Ruland and Finn O’Driscoll.”

Playing a few minutes on varsity during his sophomore year and playing as a wide receiver his junior year, Goodfellow came out ready to go his senior year. He had his first varsity start at quarterback in the Wayland’s season opener against Hopkinton.

“Our senior season is going very well and just how we planned,” Goodfellow said. “I’m grateful to have more of a normal season compared to [last year’s] seniors.”

Being named captain of the football team is widely known as a big honor in the Wayland program. After starting at safety and wide receiver and being named Rookie of the Year his junior year, Goodfellow embodies the meaning of the team’s motto: ‘United.’

Having played football his whole life, Goodfellow knew it was something he couldn’t give up after high school. He decided towards the second half of his sophomore year that he was going to pursue the idea of playing in college.

“I love football more than anything else,” Goodfellow said. “I don’t know how I would go into college [after] ending my career in high school.”

Goodfellow owes a lot of his success to the coaches who have taught him the game. Many are mentors to Goodfellow, and they use their own experiences to help him improve his skill.

“All of my coaches have been super helpful and supportive, and I look up to them a lot,” Goodfellow said. “They all played college football and are getting me ready for the next level.”

The left-handed quarterback showcased his talent in particular during the Warriors game against Newton South, where he scored five total touchdowns. Goodfellow rushed for three touchdowns and passed for two. Additionally, he ran for a total of 74 yards as well as throwing for a total of 146 yards.

“I have played football with a lot of these same guys since the beginning, so it is really special to be playing with them for one more season,” Goodfellow said. “I will always be grateful for the memories I made with these guys.”